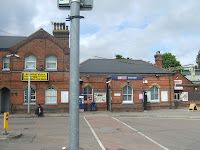 The Number 347 Route goes from Ockendon Station to Romford, and Linda and I were pleased with ourselves as we caught the 09.50 from Fenchurch Street, feeling this would be a streamlined day.  We had neither of us been to Ockendon before, and vaguely associated it with the refugee charity.  Wrong!  That's Ockenden, near Woking. 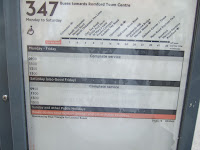 Meanwhile, back in Essex, we had a nasty shock when we discovered that the 347 runs once every two hours!  Aagh. This is the first bus we have encountered which is that rare, though we have had once an hour routes, from Bromley North, as I recall.  Happily, we had only 40 minutes to wait, rather than a possible (I suppose) 119 minutes, and the sun was shining among the clouds. 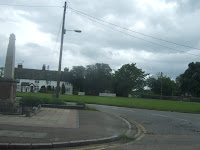 The bus arrived with several minutes to spare, and the charming driver was interested in our project.  His day starts at 08.30 when he collects his bus from Rainham Garage. (It's logoed 'Blue Triangle' but is now part of the Go Ahead Group) then he drives his route to and from Romford twice, to finish his morning at about 13.00. 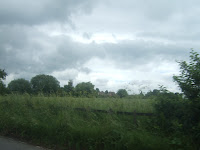 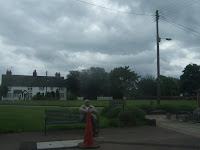 We came out of the station forecourt, turning right to reach the village green, with its war memorial, and a round towered church before heading into the countryside of Essex.  We were the only passengers as we sped past the stops, most of them named after farms (Fair Play Farm and Clay Tye Farm for instance).  We were running parallel to and east of the M 25, which enhanced out feeling of being out of London.  We were the only bus along here, and still the only passengers.


Under the M25 (briefly held up by road works and a red light) we came towards Upminster, and some more passengers got on, ending the solitude of our first fifteen minutes.  Overall, we shared our journey with about six other people, all of whom, like us, were travelling free.  in the last stages, we were joined by three young people, but they, too, travel free. 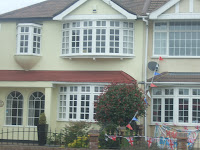 Now we were in residential areas, with a mixture of housing, including some which were decked for last weekend's patriotic mood.  There were bungalows in between semis and substantial detached properties, some of them clad with wood in East Anglian style.  What they did have in common was that they had almost all hardened their from gardens to provide car parking. 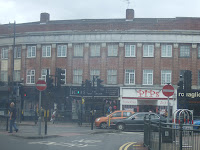 Once we were through Upminster, and past its station, we were soon back into countryside.  Through Pages Wood, we travelled along Shepherds Hill and admired the Shepherd and Dog pub. 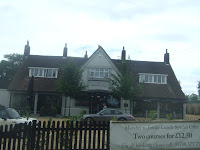 We also enjoyed the name of the Cockabourne Bridge, which crosses the Ingrebourne. 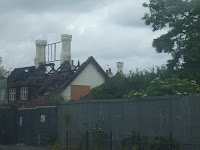 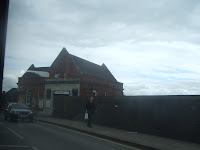 This brought us into Harold Wood, with its rather sweet little station.  Then we turned left along the A12 to visit the Gallows Corner Retail Park (where, surprisingly, no-one got off or on) and then back along the A 12, passing what had once been the Plough Pub, very derelict but with no sign of the developers moving in. 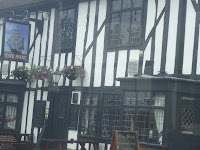 As we came into Gidea Park and turned off the A12 onto the A118, we noted that there were many pubs:  we thought that this main road from the rich fields of East Anglia to London must (in the past) have needed plenty of watering holes for travellers.  We went over the end of the Park Lake in Raphael Park, once part of the grounds of Gidea Hall. 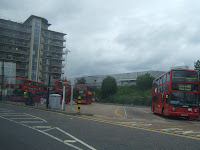 The next thing we knew, we were in the outskirts of Romford, where the three young people mentioned earlier got on ('this bus is too quiet' they yelled happily to each other)  We felt they could have walked to the station, where our bus terminated at 11.45.

Once again, the journey had taken ten minutes longer than the supposed time:  but given the very speedy passage between Ockendon and Upminster, it is hard to see how it could have been done any faster.