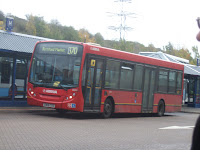 This, our second bus of the day, another single decker, picked up Linda and me (Mary being just out of  hospital) at 11.37 at Lakeside.  Having been to Bluewater last week, we were interested to see the place, but we did not linger long.
Heading back, round the roundabout, towards Hornchurch and then Romford,  we crossed the A13 (pic 6). 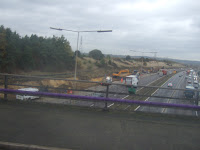 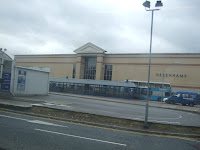 Our driver was being particularly considerate, waiting for elderly passengers to reach their seats before setting off again.  We passed a sign to the Pilgrim’s Lane Caravan Park, but this proves to be rather a puzzle, as it seems Thurrock Council disallowed it in June 2011.

Of course I am probably confused.  If I had known the Interweb would  be this enigmatic, I should  have asked the charming fellow passenger, who told us lots of useful local information, about it.  She pointed out the Davy Down Riverside Park, which houses a pumping station for bore-hole water.  She also told us about the Rainham Bird Reserve and reminded us that we were in the Mardyke Valley. 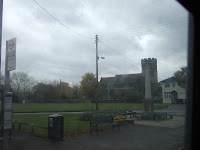 The huge Thurrock Garden Centre was displaying its Christmas offerings, but also had fireworks for sale, and then our informant drew our attention to South Ockenden Church, which we should never have remarked upon without her.  It’s a Norman Church, and started life with a small spire surmounting its round tower.  But after a lightening strike, the Victorian parishioners gave it crenellations instead 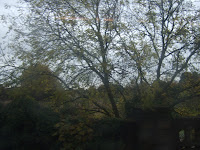 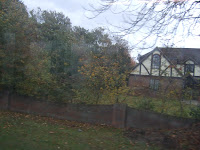 Passing the village green and the Royal Oak pub,  we were soon out into the countryside, with several farms. Our rate of travel was pretty rapid as we headed past the large crematorium and cemetery complex, and so we were soon into Upmister, and passing the Crumpled Horn pub . For those of you who wonder where you’ve heard the phrase before, here’s the answer. (By the way, all the pubs we passed in this corner of Essex/Thurrock seemed well maintained and thriving.  Of course it may be that closed pubs are turned into housing more rapidly than in other parts of London).  Homes round here were well tended and inclined to be large. 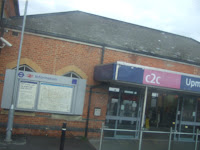 After going into and out of the station yard at Upminster, we passed the windmill, and then crossed the Ingrebourne,  looking fairly small after the dry weeks we have had. 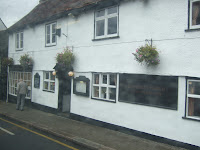 College  students crowded on as we passed Wingletye Lane, and chatted quietly as we were held up in the roadworks of  the water company.

From there it was a swift swoop into Romford, to arrive at 12.36, exactly an hour to complete this interesting rural-feeling route.  We also had a chance to notice again the planting that the councils round here have adopted, presumably for fear that climate change will mean an end to rain.