The 499 is not an easy route:  it goes from the Heathpark Estate to the Gallows Corner Tesco, neither of which is particularly convenient for other transport links.  AND it does a little twiddle around the Heathpark Estate, returning by a different route from the one it arrives by (if you follow me).  But we LWB can cope with this kind of challenge, and so we made our way to Romford Station, well served by trains on the Shenfield line from Stratford:  and you don’t need us to remind you that Stratford is easy for those lucky enough to live near the Overground. 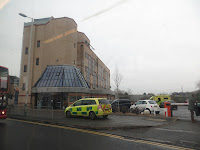 Thus it was that Linda and I (Mary being in Devon for the village pantomime) came out of Romford Station to find two stops for the 499 opposite each other and, Linda having risked her life to see which direction the first of them would take, we were off towards Harold Hill at 10.18, ready to tour the whole of that part of the route, and then head back and on towards Gallows Corner.

As we came out of Romford, we passed new but unoccupied offices,  something that we have seen across London:  and yet they keep building them. We also came to the new housing called ‘Reflections’  which we have watched grow from a hole in the ground.  Many are now occupied, but the protective fencing and the Tayor Wimpey signage suggests that the development still has a way to go.
We did not turn into the Queen Elizabeth Hospital, though we have been on buses which did, and went on to pass the large circular objects across the road from Romford’s enormous cemetery.  My A-Z calls this a gas works and in 1994 there seemed to be a plan for a mixed development.  Certainly they do not look much like gas holders now. 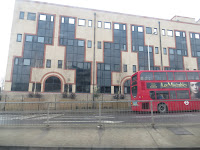 The Civic Centre is always impressive, if not particularly beautiful 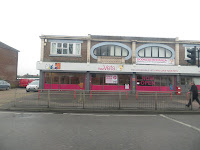 Passing through an area of decaying retail and business premises, we came to residential properties of all kinds:  flats and semis, almost all of which had hardened front gardens.  Then, turning left rather than crossing the railway, we were into Chadwell Heath, with a large parade of shops and a Post Office.  Here lots of people got on, perhaps having collected their pensions.  We also admired the vets’ large frontage and noted what had clearly once been social housing on our right, as our driver kindly waited for a lady who had been shopping in Morrisons.  Then we dived along Marston Avenue and reached the shops in Stansgate Road, where the destination of the bus was changed to Gallows Corner.  Here we paused for about five minutes, plenty of time to note that several of the shops had found it impossible to make a living; and we set off at 10.37.  The block of housing around here are named for some of the heroines of women’s rights:  Emmeline Pankhurst, and Ellen Wilkinson. There was also a block named for Mary McCarthy, but we cannot guess which one it is: novelist?  Bloomsbury group member? Here’s a list to choose from 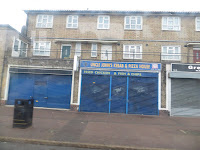 Our return route to Romford was much straighter:  indeed, we briefly shared the road with the number 5 bus, cause of our first ever visit to Romford.  We are pretty sure that the 499 is our last, at least as far as the project is concerned.

Rush Green had banners announcing the reopening of its football stadium which looks like an exciting development for football enthusiasts. 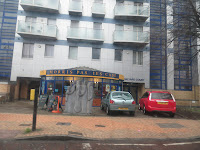 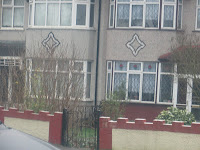 Now we were back into a residential area of the kind that  has a service road, pretty plaster work and even a segregated cycle track for a while.  Some people were having building work done (possibly solar panels, we thought) by PolishBuild.com.  We were repeating our outward route, and were soon at Romford Station, heading past the Liberty Shopping Centre and the café with the family statue outside.  Romford also has the Mercury Centre and certainly, on a day like this, indoor window shopping would have had its attractions.  Along Main Road is the Redeemed Christian Church of God for all Nations.  It says that it runs a school for autistic children, but it looks to be a bit insecure at the moment. 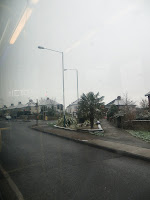 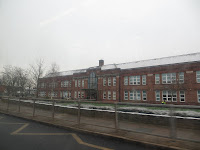 As we went north, we came to more prosperous areas and passed Marshalls Park School, an ‘improving’ school  but one which might be wise to think  about the readability levels of its dark backgrounded website.  This is mainly bungalow territory, with mostly parking spaces instead of front gardens.  We noted the fine tropical planting as we turned right along lower Bedfors Road, and lo! We were in countryside, or at least an extended green area. Linda was disappointed that no horses were to be seen, but we thought they might be snuggled down somewhere, avoiding the cold.  We were headed downhill, and did not stop for quite a stretch.  When we did stop, it was to lose our last fellow traveller. Though we picked up a few more in Noak Hill.  I was relieved to see rather a good looking convenience store, since this bus is infrequent, and not everyone owns a car (though admittedly it is hard to believe in this part of Essex.  We noticed that not everyone has houses which are well insulated:  this kind of light sprinkling of snow really shows up who allows expensive heat to leak through the roof and who doesn’t. 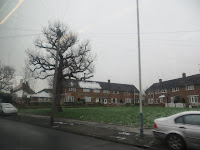 Down hill towards Harold Wood, we were again in mixed residential areas, until we came to the striking MyPlace building and its accompanying shops.

A young woman got on board with one of those enormous buggies.  Already slowed by the fact that she did not have an Oyster Card (why pay £2.40 for something which could cost £1.40?) she found she had to retreat and go through the exit doors as the machine was too large for the corridor between the seats.  Linda thought she was not a habitual bus user.

We have commented before on the Pompadours Pub.  I still do not know whether it is named for a high class courtesan or a hairstyle, though I have been wondering from time to time since we passed this way in 2011.  This is an area that flaunts its ‘patriotism’ and I am not prepared to link to some of the websites I got offered when googling pubs in the area.  I can only think that some people never go into hospital or indeed have their prescriptions dispensed, rubbish cleared or streets swept.

By now we were getting very cold:  as Linda remarked in Heaton Avenue, it was more heatoff in our bus.  Still, we were almost there, as we came back into Straight Road, which we had left to twiddle through the housing.  Then it was left at a derelict pub.  This seems to have been the Bow and Arrow, and as long ago as 1997 there were plans and protests about its future, and nothing is happening on the site  now in 2013 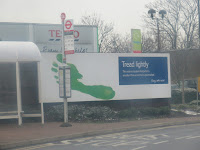 Thus we reached the mega Tescos of Gallows Corner at 11.25 (pic 14).  The carbon footprint of the store itself may be small (pic  14) but it is only visited by two small and infrequent buses, so I expect that the many cars compensate.

It was one of these infrequent buses, the 347 from Ockendon,  which whipped us back to Romford Station, much faster than the meandering 499.


Sadly, when we offered the 499 driver a card, he said he did not understand English, so we spared him the opportunity to study the blog.
at 14:45