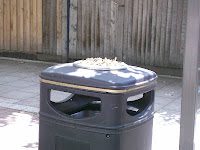 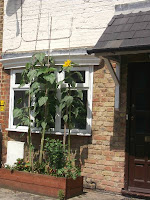 Our last bus had left us further back along the Lower Mortlake road so we walked the short way between two roundabouts – a busy stretch with workers’ cottages on one side and bland office blocks on the other – however, both pavements were wide enough to accommodate cycle tracks so bikers did not have to contend with the very heavy traffic. Again it was a single decker and as we waited we noted the overflowing bin lid of dog ends – a very depressing sight.

It’s only a short ride back into Richmond past Young’s pub and Orange Tree theatre but pausing long enough to admire Richmond’s central reservation’s hanging baskets.  The bus did not bother with the rather inadequate Richmond Bus station but headed off towards Sheen passing the splendid Christian Science Reading Room – bigger than some local libraries. This particular faith brand used to have higher profile but they seem to have been overtaken in the quirky faith stakes. 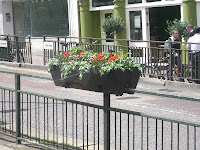 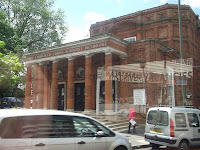 The bus passes two sets of Almshouses in quick succession, starting with the Houblon Almshouses built by the Huguenot sisters Rebecca and Susanna whose father was Lord Mayor and something big at the Bank of England; their largesse extended to brown gowns once a year for the female residents. Next come Hickey’s Almshouses – the origins of Mr Hickey’s wealth are not specified but his trustees built homes for both men and women. The exteriors are largely unchanged. 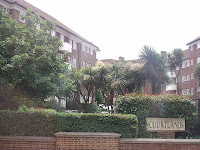 Sheen is clearly ripe for interesting building as not much further along we were astounded to see the extent of the  Courtlands development. The site has a long history but the substantial blocks date very evidently from the Thirties – we guessed there might be a shortage of parking (though the station is close) but the original architects had factored in garages also. To all intents and purposes this is actually the South Circular road and the bus follows it, passing Rosslyn Park Rugby Ground, the Sheen Garden Centre and the strangely named  ‘Lofty Turtle’ bar, until it takes a circuitous right turn along Roehampton Lane. The turning is still called the Red Rover in memory of the pub that stood here. In the Sixties I worked with a special school in Putney and the Head would often pop down here for a quick lunch-time ½ pint – how times have changed.  Roehampton Lane is now quite impressive as the University of Roehampton has unified the various colleges along here which all offered well-established teacher training courses. Maybe it was exam time or term has finished but it seemed pretty quiet. 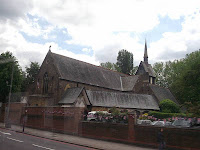 The end of the lane delivers traffic into Roehampton, a former village with extensive public housing grafted on since the Sixties. I cannot pretend the two have ever quite gelled but certainly the Roehampton Estate gets a wider range of bus services than it used to. However that was not our destination today, so we paid our respects to the Roehampton Drinking Fountains (people and horses) guarded by some distinctive putti. (P) Talking of guardians, we saw several policemen today – 2 on horseback enjoying the sun and the heath and two seemingly standing guard over the Waitrose on Upper Richmond Road… 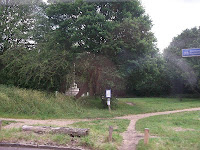 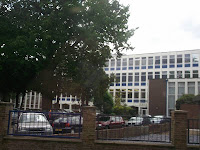 The Queen’s Own Surrey Regiment has a rather hidden war memorial, though that may be due to exuberant tree growth, as we sped along the side of Putney Heath past the Tibbets Corner roundabout and as if along to Wimbledon Park Side as the grown up Route 93 does.  However, if you have been paying attention you know the higher route numbers take the less obvious roads and so it was that we found ourselves heading to Wimbledon via Augustus Road and Southfields. There is quite dense housing here (though fortunately nothing too high-rise) and therefore an appropriate complement of schools.  Jo was taken with Our Lady of Lourdes have recently returned from the original site of the visions; next door was St.John Bosco College also RC but of whom we had no knowledge. He seems to have believed that teaching methods based on love achieve more than those based on punishment so that sounds like a good enough role model. 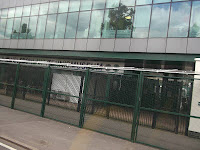 By the time we arrived in Southfields, which links this bit of London in via the District Line, we had swapped the 93 route for the 39. Southfields is of course the station you should choose if you want to visit the tennis, rather than the much more remote and over the hill Wimbledon. When the tournament is on they tend to run shuttles from Southfields to the All England Lawn Tennis Club which sits behind a long wall (I expect that’s why they only have single deckers) punctuated with thematic metal grilles. It will probably be mid-winter by the time you read this but as we came along the 2012 tournament was only 10 days away and they were still working frantically on the road surfaces, which led to a certain amount of hold up. The tennis bits of the Olympics will also be taking place here of course. Other hold ups included two cash paying /no change passengers. Opposite the AELTC is the very lovely Wimbledon Park, through which the Capital Ring walk takes you – a park complete with lake, and Capability Brown had a hand in designing it . . 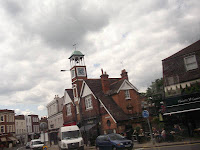 The lake I believe is a bit of diverted River Wandle and we were to meet it further down the line. Church Road brought us out in the middle of the very charming (and expensive – this where the players shop ‘locally’) Wimbledon village, before plunging down Wimbledon Hill – this is not a route that lingers in the modern town centre but we noted that Ely’s Department Store did not seem to belong to the usual John Lewis/Debenhams groups and subsequently found it is actually one of the group of 8 remaining independent department stores dotted around London, including Pearsons in Enfield and others.

This route follows others along the substantial railway lines where Waitrose have recently opened a branch, which must boost passenger numbers somewhat. More enigmatic is the unnamed cemetery  along Gap Road  To quote Darren Beach: ‘ A measure of how little consideration is usually given to this cemetery is that even Merton Council seems reluctant to give much information…’  We have been past several times and it does not even seem to have a visible name board. 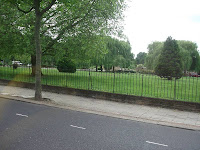 The surroundings change radically at this point.  Though the Wandle (which we crossed near Plough Road) is no longer the industrial river it once was the area is full of business parks, workshops, large warehouses,outlets etc which doubtless serve both Wimbledon and Tooting just over the horizon. We stopped in one such location for the drivers to change – this seemed a deeply puzzling place to swap over with the mini-hub of St George’s just round the corner. 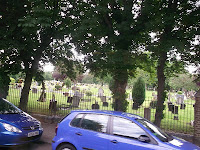 The 493 finishes by paralleling the walls of Lambeth’s Cemetery and Crematorium in Blackshaw Road.  It boasts few ‘names’ except for Charlie Chaplin’s father in an unmarked grave, which tells you something about that family’s early poverty. At the end of Blackshaw Road is St George’s Hospital now well settled in this part of London after its post war re-location. St George’s is well supplied with buses and is also close to the Northern Line on Tooting Broadway. We stayed on because that is what we do (end to end of every route) but it would have been much quicker to walk than wait ages to come out of the side road and edge along the quite narrow High Street. As we got out we realised the 493 does another loop to finish back at the hospital – something of a glutton for punishment as we had already been underway for 90 minutes!

Lunch and other chores took precedence on reaching the last stop so there. 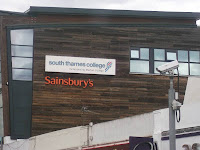 If you're exhausted reading this think how we were after this epic south-west London trip.
at 02:55