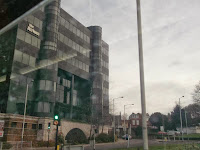 In case you have been wondering about the gaps – and don’t anyone say we short change you on information you never knew you wanted to know – there used also to be Routes U6 and U8, but they are no longer with us. With great thanks to Ian Armstrong of London Bus Routes History, this is what they did in their time:

The U6 operated from West Drayton to Hayes via Stockley Park from June 1991, but was absorbed into the U1 in 1996.
The U8 operated on Sundays only from August 1991 to June ‘93 from Uxbridge to Harefield via Ruislip.

This was to be our last day in Uxbridge  (and the day Jo discovered that the station building was listed and had some beautiful stained glass) and quite a cold one it was too, necessitating a couple of dives into the Pavilions to look for the facilities and some old-fashioned Christmas Garlands of the kind Woolworths used to sell. 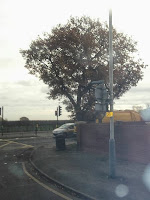 These last 3 Buses in the U series routes count as infrequent (3 x hour, 2 x hour  1 x hour) so it was better to kill time indoors. Not surprisingly for an infrequent route, when our bus came it was a small single door single decker bus but for its size did score over a dozen passengers. Fortunately it seemed to have some heating as this was a country route.

We left Uxbridge by the Atrium Roundabout, some of the offices are ‘TO LET’ but the ground floor has been taken by a new gym called ‘RUSH’ which sports very bright green lettering. Several of the town’s roundabouts are sponsored and always well planted and maintained. 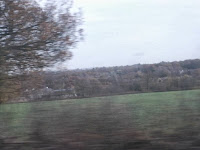 The U9 takes the smaller, quieter Harefield Road, passing Colnedale, where the name hints that this area’s history is closely lined to the River Colne. This minor road is bordered by smaller cottages, and then some larger properties. The Swakeleys roundabout takes traffic over the access to the M40 and like much of this route and the other Us is festooned with posters objecting to the proposed High Speed 2 railway. Today we were not heading to Swakeleys but straight across and along Harvil Road. We had taken on the last passengers and the driver’s foot went down on the accelerator; this was totally justified with a speed limit of 50 MPH and few stops. 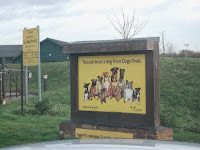 I guess few stops were needed as both sides of the road seemed to be fields /farms, and this ridge-like road offered fine views over the distant or perhaps not so distant hills – given that the railway we crossed was the Chiltern line perhaps these were the Chilterns we saw?

The key landmark along here is  The Dogs Trust whose byline is that they never destroy a healthy dog; certainly there is plenty of space around here to let their rescued pets frolic. What also caught our eye was a large poster for ‘Jovial Jerseys and Harmony Holsteins’, while I query the use of harmony as an adjective I presume the farmers concerned have their two breeds of cow living happily alongside each other, not that sectarian violence is a feature of bovine life? 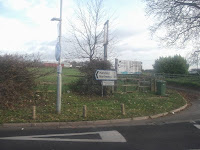 there was a sign for ANZAC WAR GRAVES  – these date from the First World War when Australian and New Zealand soldiers were treated at  Harefield Hospital, and those who did not make it were buried in St. Mary's Churchyard.   The crossroads mark the heart of the village complete with Green, several pubs and the later addition of the Library (more protest posters visible here) and there is much made of the village motif – a hearty hare. 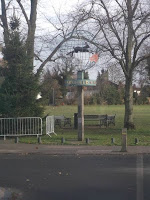 Somewhat to our surprise the bus turns down quite a narrow road (we had to negotiate slowly past a parked gravel/tar spreading lorry) towards an area called Mount Pleasant – the views were spectacular down over the Grand Union Canal and a series of lakes, as Jo correctly surmised, former gravel pits. They of course lie over the ‘border’ which separates Greater London from the rest of the country…

Having picked up a few younger passengers the bus returned to the village centre to press on to its final destination – Harefield Hospital. It does feel very remote, with no nearby stations and merely this route and a non-TFL services as public transport, so it was not surprising that there were several cars and hospital transport vehicles dotted round the site.  About a third of the beds are dedicated to heart surgery and treatment and it has long been famous for its transplant and associated procedures, which goes to show that pioneering work can take place in less than shiny new surroundings. These buildings date from the late Thirties. 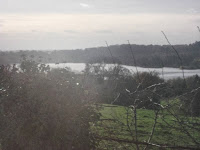 This marked the end of the route – the driver left his engine running (not usually advised) while he nipped into the Refreshments block; because of the remoteness we stayed aboard, and then we set off again to return to the Uxbridge hub.

The route took the 24 minutes advised and had been one of most rural trips of the Project. 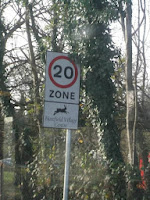 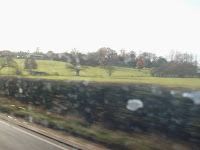 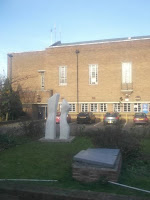