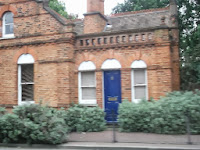 This was in fact our first ‘R’ bus though will be the last to be blogged as we were combining it with the rather more regular R1. This is an every 15 minute route though the bus stop announcement informed us it would be 17 minutes, which is at least honest. This gave us time to contemplate the conundrum that is a government that solves the problem of a financially failing hospital by closing parts of a succeeding one for I suppose you might term the failing trinity of Royals – Queen Mary, the Princess Royal and Queen Elizabeth, in other words the South London health Care Trust which is about to be dissolved (Between riding and blogging the Trust is no more, but the hospitals continue – for the time being.) (That's the Registry Office, not the Hospital)

We were waiting between the 2 Mary’s (having just celebrated Mary’s birthday) that is the Queen, which is the hospital and the Saint which  along with her son, Christ the King,  is a 6th form college, very evident from the range of younger passengers waiting at the stop. This was not their favoured route.     This was also not our only Mary today.?? 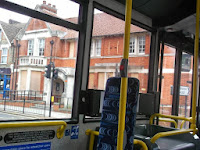 As expected the bus headed back to the High Street where more passengers boarded, though this was never a busy route. Proudly positioned midway along the High Street stands the now closed 1911 built Police Station,  an event we had seen already on our last trip through here; our remarks were picked up by the passenger in front who told us she had seen builders outside and the intention was to turn into a restaurant ‘like we need another one’ she opined ‘the High Street has at least 30..’ and Jo thought it would probably go by some witty name like ‘Cell By’. Still we shall not be back to see what really happens. 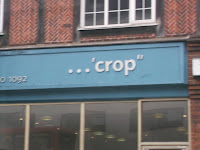 By now we were out on the road to Footscray and of course much of this trip followed the course of this quite significant South London river which has been faithfully recorded and photographed here.

After enjoying some of the older cottages along Cray Avenue close to Ruxley  (one of those places whose existence we only learnt through bus travel) we called into the huge Tescos, where also lurks the altogether more mainstream Route 321. 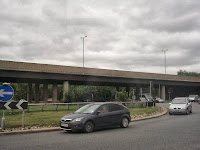 Thereafter there was a patch of green not as in crop growing but playing fields for a local school. There is extensive public housing here apparently built to house depressed/homeless/workless dock labourers displaced after so many of the wharves closed, which is perhaps why there is a bus route back to Deptford and New Cross (321). We were passing by the two Crays, St Paul’s and St Mary, making it our third Mary of the day.  The homes are scattered up and down some quite steep hills named for some reasons after areas of Hertfordshire, as in Croxley and Chipperfield. There is overlap with the B14 here and soon the route descends to the main road into Orpington, which is lined with both shopping outlets and industrial units. Allied Bakeries have eye-catching premises thought the company itself seems allegedly mired in the now only too common habit of tax avoidance. Happily it is still a local employer producing apparently much of the sliced bread, (since which this is the best thing) for SE England.

This major road, as we know from many previous routes leads into Orpington past the several ponds where the Cray’s origins are marked.  Orpington also marked the most significant interchange of passengers of this route. 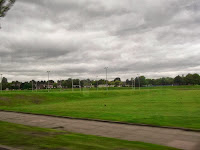 Jo noticed a constituency office for her namesake Johnson and asked if he was any relation – yes indeed the constituency famed for returning the first Liberal MP for about a hundred years now has Boris’ baby brother as its MP. Our journey along the High Street was quick this morning but we did have time to admire Bromley’s excellent hanging baskets and the floral displays round their well-positioned war memorial. This route goes straight on at the memorial roundabout and after a stretch goes quite steeply uphill for the Canada Wing of Orpington Hospital, in fact the only remaining segment of a hospital build by the Canadians at the start of the First World war to treat their war wounded (which they must have done well as only 1% of their casualties died) – the ‘huts’ remained through World War II then treating Dunkirk survivors with the buildings being demolished and rebuilt in 1993; however there is limited activity here and every likelihood this small unit could go as part of the financial problems and solutions ( see Para 1!)   The remaining land has been sold off some time ago and there are many new buildings hereabouts, including a hospice. 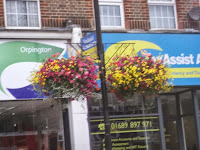 After this little detour the R11 rejoins the main road at the bottom of the hill and it proves to be a very brief ride down to Green Street Green, which in my ‘pre-bus’ days I had always thought to be pretty much in the middle of nowhere… but in fact proves to be administratively part of Bromley borough, in spite of the glimpse of an Oast House. The bus stops at the end of the High Street – World’s End Lane is the official stop name but as there were three large pubs   in full view – the Royal Oak, the Ember (formerly the Queen’s Head) and Young’s Rose & Crown it hardly felt like the local population’s need for real ale had been neglected. This journey through some local hubs and hospitals in Bromley borough had taken about 45 minutes. 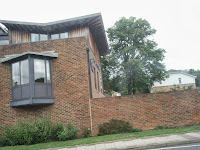 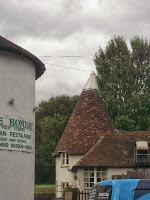