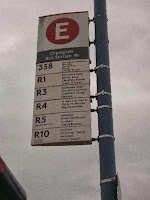 We could have put this route up under the R5 as they cover the same loop but in opposite directions but it was for the 11.20 R10 that we arrived at Orpington Station. As the time-table shows and the red on the bus map alerts this is an every  2 hour service, with one every hour in opposite directions.
The service is provided by a small bus that goes quite fast and once past Orpington becomes something of a ‘boneshaker’; I suppose the smaller the model the fewer the springs.  Between here and the station we gained one very elderly and additional passenger whom the driver delivered quite carefully to the Orpington Sainsbury’s which lurks round the corner from the High Street at the back of The Walnuts, which proves to be not just a food store with some fine marigolds in front but also a leisure centre with greater pretensions towards a shopping experience. No lingering today though and the bus set off back to the war memorial and the Sevenoaks Road to Green Street Green. This route does not call in at the nearly redundant Orpington Hospital but does linger awhile at the eponymous Green (technically the Farnborough Hill garage) where the drivers changed over, a pleasant wait in the summer months but a bit exposed later in the year. 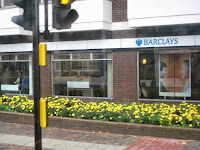 A couple of weeks back we thought that Green Street Green was as far as you could go but today’s trip was to take us way beyond the Zone 6 boundary into small village Kent. Quite clearly TFL’s Journey Planner thinks the world (well their world) stops at Green Street Green as their route map implies this is the end of this route; far from it as it was about to get going. 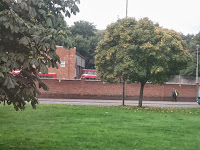 Just as you leave the village there is a boundary post marker for the the Coal Tax, which Wiki explains much better than I can. A sort of early Congestion Charge? As with all these things there is someone who has tried to track down the remaining posts and here are his photos. As you can see Green Street Green is a rich hunting ground and the R and dear old B routes the ‘way to go’

From here on the route is a bit of guesswork as we rattled along without stopping. On the whole the hedgerows and /or fences were too high to peer over and where we could the bus was going too fast or too bumpily for the photos to make much sense.  The road sign had promised ‘Bends for 2 miles’ which was indeed the case.  There were no pavements thus no stops though we did spot a rather rustic bus shelter some way along Cudham; apart from us there were 2 other passengers. Notices glimpsed at gateways indicated the presence of a cattery, some stables both riding and livery (park your horse for some-one else to look after) and probably some farms. 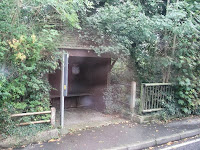 'The Shaws' proves not to be a farm but in fact a camp for the Girl Guide Movement, not that it was visible from the road. The first stand-out building we spotted was the Tally Ho Pub. So by now I was beginning to wonder whether ‘chaps’ hunted round here’. Hunting or not, ‘chaps’ there certainly are as by this time we had arrived (and stopped very briefly) in Knockholt Village Centre noticing that the village finger posts were offering us Chevening, now the official shared residence of the Foreign Secretary and Deputy Prime Minister. Do you suppose they ‘book’ alternate weeks or split the house in two? 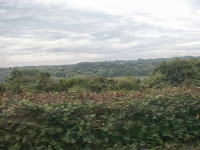 Next up is the ‘Knockholt Pound’ of the destination blind – I had thought this might be a corruption of  ‘pond, but no, as Jo correctly said (the advantages of travelling with a historian), it was just an area to round up the stray animals, the village is along two roads with the focal point the crossroads by the Three Horseshoes pub, enhanced by a bright floral display still going strong in October. 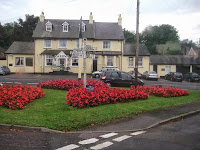 We thought this might mark the furthest reach of this circular route but it passes on through the village to offer a service (albeit an infrequent one) to the folk of Halstead. This village seemed altogether more modern and dense but while Knockholt had a village shop even such a basic amenity seemed missing here. Wikipedia suggests that this might have been the original setting for E. Nesbit’s ‘The Railway Children’ as at one time the author had a house here and the Knockholt line does have both cuttings and a tunnel, which would allow for the major dramatic plot lines. The fact that the most memorable filmed version was location shot in Yorkshire makes it hard to envisage it set round here. Though we were on an altogether different form of transport , we were aware that Knockholt station is of course a very long way from Knockholt. There is a complex explanation for that, involving the fact that there is another Halstead in Essex and Badgers Mount is too small to warrant having a station named after it, hence the default option of Knockholt...  We lost our second fellow passenger at the 'Cock' pub and from its history there has obviously been a drinking joint here for several centuries. 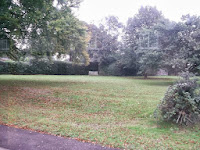 The R10 all but returns to Knockholt Pound before heading up Rushmore Hill towards Pratts Bottom, which is the point at which I realised I did recognise where I was.  Coolings Nursery is a well stocked and well ordered garden centre where the plants take precedence From here of course it seems only a short distance to the A21 so whereas the bus speeding along the narrow lanes felt a little edgy, by the time we were on the main road it felt appropriate. 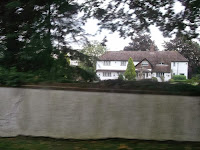 We had gained a single passenger and though from here on we were in company with other R routes waiting passengers seemed to prefer alternative bus options. One gentleman boarded looking pointedly at his watch, so I don’t know if we had slipped a couple of minutes off the timetable?   Just past Green Street Green we passed a low lying white boarded building and both thought it looked like a railway dwelling (a stationmaster’s house as it were) but perhaps we have been playing with one too many Hornby Dublo sets or reading too many Thomas the Tank Engine books. 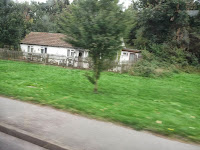 From here on we were back on the route by which we had left Orpington earlier, calling again at the war memorial and into the Walnuts before being delivered back at the station just under 55 minutes after we had left. The route has much potential but would almost certainly be better viewed from a taller vehicle where the passenger could fully appreciate views of the not so distant downlands, fields and wildlife which are such a feature of the Rs 10 and 5.  Equally obviously the roads followed are much too narrow to allow for this.

Long-time readers/followers of this blog have undoubtedly noted our recent slower progress: we continue to ride at the same rate as ever – weekly with very few exceptions – but it takes as almost twice as long to reach the starting points of these more outlying routes and they can be quite tricky to combine. As it is we feel as though we have circled Orpington’s war memorial more often than there are routes.  Additionally the buses run quite infrequently though thanks to some cunning planning and not a little luck we did not have to wait too long today
at 00:34