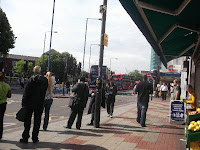 Morden Station was an easy start and we had given ourselves plenty of time to catch the shy little K5 – a mere 23 seater (though with plenty of disabled/buggy space) that hides behind other bigger routes parked outside Morden Station. It also only runs once an hour so we were first in the queue for the 10.45, though actually it was never more than half full.   Sometimes the passengers and drivers on these rarer routes greet each other as long lost friends but this did not seem to be the case in leafy South West London. 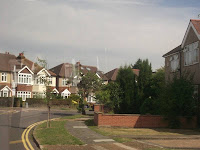 Great chunks of this route were ‘Hail and Ride’ – almost every time that we came off the mainer roads we criss-crossed residential housing, often lacking in clear signage, so if we confuse our Raynes Park with our Motspur Park please excuse us. There are few landmarks to interrupt the very pleasant houses and gardens, so spotting the green flash of the Merton Park Bowls Club was something of a diversion. This along with the neighbouring park, John Innes Park and the surrounding area have quite an interesting history. And yes it is the John Innes after whom the potting compost is named. 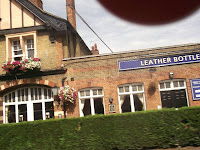 Back on the main road we are reminded that we are in ‘Nelson’ territory with the hospital named for him destined for a makeover close to Wimbledon Chase station, which has certainly seen better days. The Dundonald Church seemed to be functioning in a former small factory building, and close by was a clear demolition site – unusually there was no clue as to the plans for what was going on behind the blue fences so perhaps this is where the ‘new’ Nelson will spring up?

After a brief spell on the main road passing Raynes Park Library we went along the, to us, misplaced /misnamed Bushey Road (the Bushey we know is up in Hertfordshire) then crossed over Carter’s Bridge: a bit of research has revealed that this bridge was named for the seed company – Carter's Tested Seeds – which was here from 1911-1970. I suppose the clue is in the names for local areas – Worcester, Raynes and Motspur PARK, all implying a more rural and certainly horticultural heritage. I wonder if the Innes and Carters ever got together?? 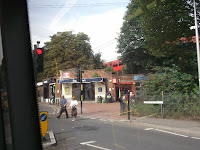 Certainly not around in their day was Shannon Corner, or not at least in its present incarnation with several layers of road and a couple of huge superstores, where of course we won more passengers. We had passed this way some 3 years ago on the 131 route, but there may well have been some new building since then. 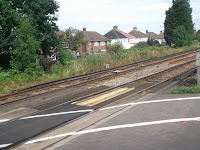 As before we left the big roads and returned to another block (literally 3 sides of a square) of Hail and Ride, this one through ‘West Barnes’ which seems to be an alternative name for Raynes Park, as even we knew we weren’t in the one adjacent to Putney. Unusually the bus route crosses the same line of railway via a level crossing twice in quick succession.

Motspur Park, whose main landmark seemed to be the Earl Beatty pub, really morphs into Old Malden and for a while we were back on the K1 bus route.  This stretch of the route had once had large detached homes, which in their later years were now residential homes for the elderly. Also along here a church with a fine large scallop shell which is of course the logo, if you will, for St James of Compostela. If it’s New Malden it must be the Fountain and sure enough we had swift passage past the main landmarks, and did not of course take the more obvious High Street/station route, but launched into another section of Hail and Ride in order to get to Kingston via more residential roads – solo older properties and bungalows this time.Kingston also thought this was a good area to teach children cycling road safety. 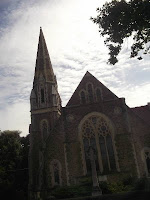 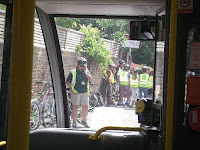 As Jo pointed out on the previous account, crossing Kingston these K routes seem to favour the Norbiton, including the hospital, Kingston Central then Surbiton exit to places further south. On the way into the commercial heart of Kingston the bus goes along the London Road, nothing unusual there except I feel the need to mention the enormous 'fatberg' that was in the news recently as having  been found and then broken down in the sewers below here to prevent more above ground damage

London Road actually has comparatively little dense housing and quite a lot of shops and offices so I was a bit surprised it should be the perpetrator or progenitor of this anything but attractive lump of lard. However as Jo pointed out even grease and muck are subject to gravity so this was doubtless an accumulation of debris originating further up the various hills that reach ground level hereabouts. Anyway no sign of sewage thank goodness.  By now we had been underway an hour. 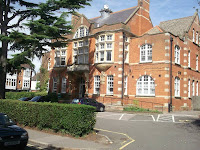 Kingston commerce behind us, we headed out of town, NOT via Surbiton for once, but through some random streets that had clearly been there before town planning was a glint in anyone’s eye.

Tucked away is the Wych Elm pub,  which seems as well known locally for its plants as for its pints. Also intriguing was a large commanding building dated 1875 called The Keep around which the bus drove a curve; on the map it occupies quite a large area and it seems to have been once the home base/barracks for the Queen's Royal Surreys, a local regiment. There is a history of complaints about the poor maintenance offered to the residents as recently as 2008 but I could not establish if these properties were still with the MoD, or had been privatised – a chunk of prime real estate in the Royal Borough being something of a gold mine, I would have thought? 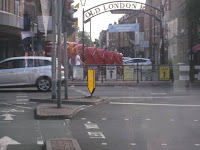 Talking of housing developments, we were about to enter and circulate round and through the ‘Tudor’ estate, so called not just for the pseudo Tudor beaming frequently applied but because the street names were all straight out of ‘Wolf Hall’ and the most devious plotty era of Henry VIII’s history – Cardinal Avenue, Wolsey Drive, Ann Boleyn Walk: disgraced and/or beheaded they may have been but was it a worse fate to end up as Kingston postcodes? 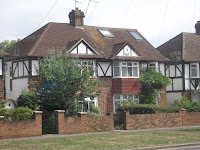 More recent history involves the once very busy aircraft factory that was located on this bus route (Jo spotted a little plaque with a plane on it – it looks quite modern she said ) with probably it most famous product being the Sopwiths various, as flown by the famous  World War I flying ace Snoopy

Having strayed totally off the subject you won’t be surprised to hear that after Kingston we pretty much had the bus to ourselves and were certainly the only passengers descending at the final point in Duke’s Avenue. It is in fact only just round the back of the amazingly selective Cassel Hospital, but I will not bore you with details of that. This was a long and complex journey taking in excess of 75 minutes. 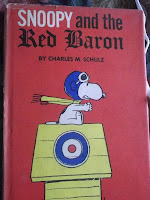