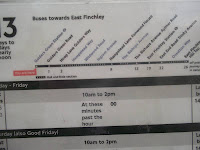 Apologies for this late posting – a combination of overlapping holidays and house guests plus an elderly mother means that there has been little time to ride many routes and even less time to blog them, so some 2 weeks after the event here is the H3.


Red writing on the bus maps, we learnt as we reached the higher numbers, means select and infrequent service so we had to time our arrival for the once an hour departure (mid-day only) that characterizes this route.  This would also be our last departure from Golders Green Bus Station. 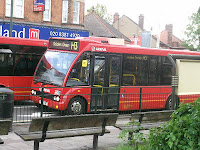 Like its companion bus this was a small vehicle (too small to be taken from its mother, we thought). Bravely it circles the clock tower war memorial (‘Justice Honour Loyalty Courage’ being the key words) and then started its journey up Hoop Lane, doubtless to offer transport for folk headed either to the Jewish cemetery or the crematorium. Three of my four fourbears (or do I mean forebares?) are buried on the left hand side and I’ve been to several cremations on the right hand side; the red brick is quite startling and also forbidding but actually quite harmonious. It was the first purpose built crematorium and thus set the model for many to follow. In comparison the Jewish cemetery is rather flat and a bit featureless with plots at a huge premium.


Enough with death and disposal and back to Hampstead Garden Suburb – we are most grateful for the comment informing us that garden hedges have to be retained as we certainly enjoyed the greenery today. Unlike its companion route the H2, once we had come past the wisteria-laden roundabout at Meadway we headed off uphill along Hampstead Way * and what is effectively the Heath Extension. (Meadway is the answer to another obscure question - its first three letters being the original pre-numbers only dialling code for this area.) Given today's trip perhaps they (BT's predecessors) should  have gone for WISteria as a possible code. 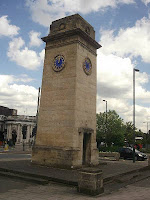 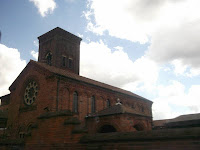 The Heath Extension is altogether another beast from the much better known and more popular main hilly heath with its famous views over London. This part was more lately acquired and has several designated sports areas, where we were taken as pupils to play rounders in the summer; certainly the most pleasurable of compulsory school games. 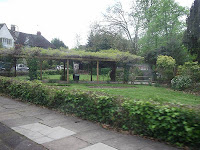 As is often the case in prime residential areas the higher we went the larger and more detached the properties became, so the more modestly-hedged properties of Meadway (thanks for explaining about the building/gardening restrictions) gave way to the altogether grander double fronted detached drives-holding-more-than-one-car homes along Hampstead Way* (see below) and Wildwood Road. The route does a brief sortie out onto a more main road with a chance to visit Kenwood House, currently having a makeover, before diving back down the Bishops Avenue, where electric fencing smacks of ambassadorial and similar abodes. Needles to say most of this section is ‘Hail & Ride’ and we reckoned many of those travelling were ‘servicing’ the big homes in on way or another. 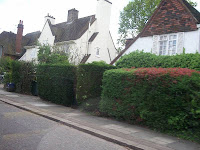 Unlike the H2 this route strays out of post code NW11 and into both NW3 and N2 to merge the other side of the busy trunk routes at East Finchley Station complete with its lone rooftop archer (not to be confused with a lone assailant assassin) and renowned Phoenix Cinema currently running, it must be said, a rather mainstream choice of film.  We briefly shared the road with a couple of other bus routes before peeking off into the unknown (for us) territory of East Finchley’s hinterland. The other landmark to be spotted from the bus is the Bobath centre, offering physiotherapy particularly for those people with cerebral palsy.  After the ‘dry’ stretch that marks out Hampstead Garden Suburb as an alcohol free zone (presumably also part of Dame Henrietta Barnet’s vision of ideal living) the ‘Five Bells’ pub with its flaming orange frontage could have been more attractive.   I cannot actually establish that her town planning was as explicit as that but as a woman who set out to rescue young women from prostitution (and put them into service) she would surely have advocated gardening over drinking as a pursuit? 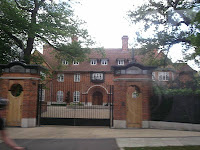 This and the Old White Lion were the only pubs we saw on this trip, and East Finchley had two sets of shops – those round the station inevitably offering fast food and dry cleaning, those two staples of the Underground user, and the few further opportunities towards Ossulton Way.  We enjoyed 'Amazing Grates' and  the later 'Dr Hunger Cafe'. This part of Hampstead Garden Suburb seems to be of a somewhat later build and includes some more modernist houses as well as the more ‘stock in trade’ Arts and Crafts homes – lots more hedges of course!!

As we reached Hill Top the bus indicator board briefly flashed up the message, ‘Hesitation Point’, which proves not to be a postal street, but in fact the driver pauses briefly before turning around and heading back.  So back we went – through East Finchley, across the A1 (easier than you might think) back along the Bishops Avenue, past Kenwood and – this time more poised to photograph – the Heath Extension and entrance to the Jewish Cemetery. 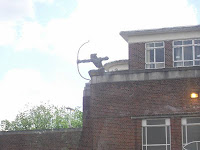 The H3 is a little more daring than the H2, branching out beyond NW11, and on a late spring day we really appreciated the greenery that characterizes much of the area. It all looked so respectable that it seemed difficult to imagine that I had passed some of my not very mis-spent youth trolling its streets for likely parties to gate-crash, and sometimes getting lucky… Today it passengers were few and the round trip achieved in the 53 minutes promised – our guess being that the odd minute covered the 'hesitation'. 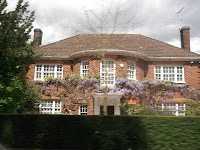 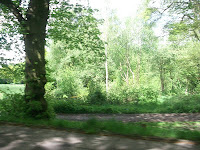 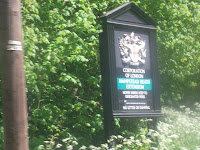 In theory a route which gets  you from one branch of the Northern Line to the other without going back to Camden should be useful, however at 5 buses a day total perhaps not?
at 01:46