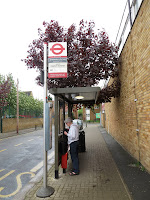 This looks, doesn't it, as if we were about to embark on a sequence of 'G' Routes, taking us, perhaps to Guildford, or Godalming, or Gospel Oak or Green Lanes, or somewhere.  But no!  The 'G' stands for St George's Hospital, and, while there used to be a G2 as well, this is now the only 'G' Route. It goes from nearly Battersea to beyond Streatham, and takes 95 minutes to do it.

Mary and I (Linda being at work) met at Clapham Junction, by the miracle which is the London Overground, which had brought us from different directions, and we walked along to the Shaftesbury Estate, arriving in time for a bus predicted for 9.39.  Alas! no bus appeared until 10.20, so there was time for convivial chat with the people at the bus stop. 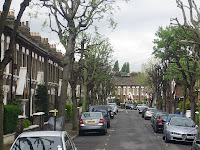 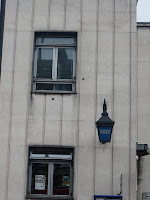 When at last the bus (single decker, single door) set off, we collected more passengers as we passed through the charming terraces of the estate, deliberately designed to provide variety with uniformity.  By the time we reached Lavender Hill and its oppressive police station, there was standing room only. 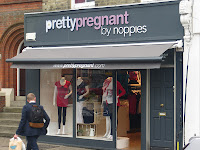 Several bus stops were closed as we headed towards the Falcon Pub, and turned left into Northcote Road.  This is such a posh area now that we had barely time to record all the smart shops:  a Waitrose, certainly, and a Jamie Oliver, but also a Neale's Yard Remedies shop and a couple of Peppermint furniture places.  And of course, the provision for what is, after all Nappy Valley: a Jo Jo Maman Baby, a Petit Bateau.... enough! 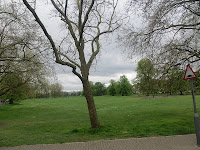 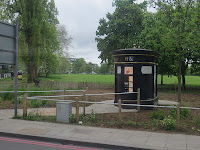 Many of the houses had their lovely tiling intact in the porches, but the speed and size of the bus and the less than clean windows meant that even Mary could not provide a clear photo.  A turn right along The Avenue, brought us to the Common, and the handsome conveniences opposite Clapham South Station. 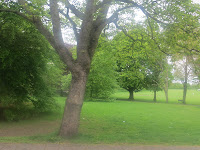 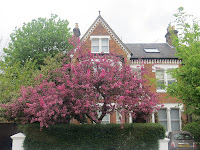 We were heading along the appalling Cycling Superhighway 7, a few blobs of blue paint, interspersed with parked cars, supposedly providing a trunk route into central London.  But the lovely houses and the striking cherry blossom made up for CS7, and we were soon alongside Wandsworth Common, and past more remarkable shops and restaurants, including Chez Bruce, which Mary says is well worth a visit. 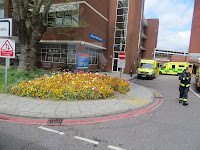 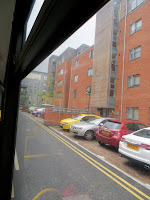 Then we went through some gates into the grounds of Springfield Hospital, to loop round and re-emerge past the golf course.  We came to Burntwood School, which seems to be having massive building work done, and then we turned into St George's Grove, and came to a substantial area of new apartments, including Horton Halls, which are home to students at St George's.  A number of young people got on, and rode with us past Streatham Cemetery and the almshouses opposite, before getting off at St George's Hospital.  We admired the planting around the hospital, the combination of wallflowers and tulips giving an almost 'Olympic Park' density of colour. 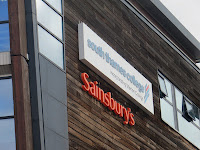 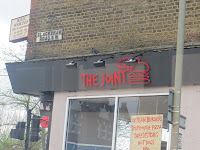 Coming out the other side of the hospital grounds, we came into Tooting passing The Joint, which offers 'artisan burgers'.  I don't quite know what that means, so here is a review.  There was also a Bulgarian Breakfast Bar, as well as South Thames College, perched on top of Sainsbury's.  Through this busy area, CS7 is narrower than the handlebars on my bicycle, so not very useful, then. 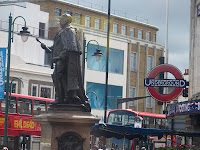 Soon we were passing Edward VII as he stands outside Tooting Broadway Station; until the recent 150th anniversary of the Underground, this must be the closest any royal has ever been to the tube. 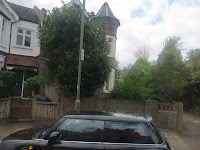 As we turned into Mitcham Road, we were into an area of pound shops and pawnbrokers, in contrast to the shops of a few miles back.

Our next Common of the common-filled trip was Tooting Bec, and we were once again among large houses. before coming into Streatham and to St Leonard's Church, where so many buses pause.  Then we were along Streatham Green, with the handsome Dyce Water Fountain. We came past the building site which will soon be Streatham's new Leisure Centre, as well as the HQ of Lambeth Social Services, and alongside Streatham Common, to reach the end of the route in Hermitage Lane, pretty well into Norbury, at 11.35.

This had been a lovely journey, our driving wiggling skilfully and politely through residential streets solid with parked cars, returning to mainer roads from time to time.  It linked the various villages of South West London, which I had always thought of as separate entities, and I am not surprised that it is Alice's favourite bus.