This was very much the middle route and poor relation of our journey today, coming as it did between the lengthy 314 that had brought us to outer Croydon and the 320 which was to take us back from a country trip to inner London Catford. It was also a short and infrequent route – only 2 an hour. 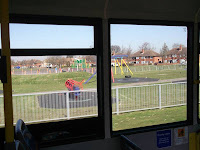 However, luck was on our side and having left the long haul 314 at New Addington Parkway we had only a few minutes to wait. This route took the quickest way out of New Addington, heading rapidly downhill past more housing (very few flats round here) and a scattering of children’s play areas. Again we were enjoying unseasonably warm Spring weather – a perfect day for a trip to the country. 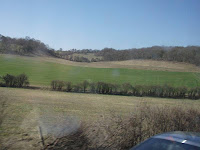 We came out along Homestead Way which, with King Henry’s Drive, brackets the New Addington estate, then leaving all other routes and dwellings behind headed down and up two significant hills, Jewels Hill and Saltbox Hill. The road is the North Downs equivalent of single lane hairpin bends so there was something of a ruck when our driver encountered someone coming up the hill in the middle of the road, and gave him a polite piece of his mind. I don’t know if it is an accident prone drive but there have been spills before. 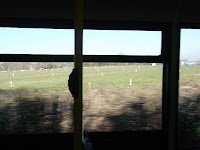 Notwithstanding the steady traffic nature prevails and from the cleaner side of the bus we had some excellent views over both natural grassland and more cultivated land. Today there seemed to be a 'cone crop'?
Not surprisingly there are no bus stops along here. 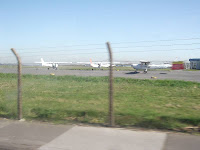 As we reached the crest and the main road we just glimpsed the airport, better served by the 246 and 320 routes and a road sign offering us either Westerham (no) or Biggin Hill – yes. Biggin Hill is now a small airport on the former RAF site famed for its role in the Battle of Britain and still hosting its annual air show.

Biggin Hill village is a mixture of the older properties, which would have been part of the original settlement, the homes built to house airmen and other staff and more modern commuter homes. We had been pretty much on our own but by the Post Office a group of men got on for the rest of the ride. After a steep down along Stock Hill the 464 heads on alone up Ricketts Hill, which was so steep our ears popped. This very picturesque part of the trip was leafy, and in the sun actively going green (the leaves I mean, not us) but with significant properties set well back from the road. The road had a little verge with a trodden path rather than a proper pavement. 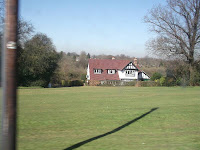 Tatsfield Green  (and by now you know my views on this overused description) was all that you might wish from a classic village green – pond with ducks, historic horse trough, village store, upmarket restaurant and pub grub. There was a bus shelter too but we did not need this. Our driver said he would be returning in 10 minutes so we used the time for a short stroll and taking, for once, some more presentable photos of this our final destination for the short and very sweet 464 – the advertised trip of 22 minutes had taken only 18 and the contrast between the large council estate we had left from and our finishing point was extreme. 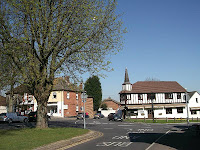 Their website refers to Tatsfield as the ‘island in the sky’ and also resolved Mary’s and my dispute as to whether this was Kent or Surrey, with Biggin Hill still firmly in Bromley Borough. We decided against a downhill scramble to get to the Biggin Hill Valley and our driver was happy to let us off at what he called the first stop for the 320. 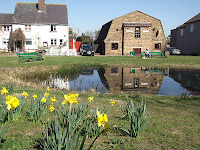 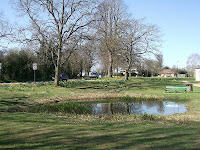