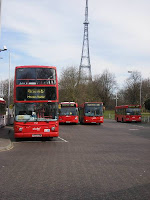 Another lovely bright if chilly spring day as we gathered at Crystal Palace having arrived by land, sea and air – in fact rail, bus and on foot – so a bit disappointed to see the public loos at the garage had become staff only. We missed a 410 looking for alternatives and decided to take a chance on Wallington and Worcester Park – our destinations for today. The bus was a single-decker: busy from the off and getting busier along the way.
One of the most noticeable features of this area is the two transmitters – one along Crystal Palace Parade past the bus station,  which looms over the park and the South Norwood one which loomed over much of the early part of this trip. Not surprising  as this is the highest point  in SE London. The second stop into the journey is for Crystal Palace station, which is down from where the old Crystal Palace itself stood . The line has always split here and since May 2010 when it joined the Overground the station is a nightmare of inaccessibility with up and down steps wherever you are going. No sign of lifts as yet. 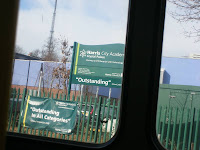 Having started at the highest point of the ‘Old North Wood’ which stretches effectively from Croydon to Brockley, the only was down and down Anerley Hill we went only to turn off right fairly soon.  The right turn is very much the signature dish of this bus route as by and large it avoids the busier main roads and serves the communities of Norwoods Upper and Lower. Beside the transmitters the main feature of this area is the Lake in South Norwood park – interestingly it was originally built as part of the Croydon Canal, of which more later. 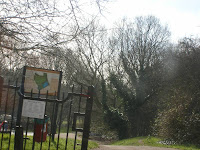 Many of the very grand Victorian villas, now mainly converted into flats, obviously date from the same era (one the former home of the black Victorian stage actor Ira Aldridge
and the coming of the railway. In patches these have been replaced by smaller more manageable homes. The most modern building we saw up here was (yet another) Harris Academy, which seem to proliferate round here.

We eventually, having made many more right turns, joined the main road into South Norwood Hill just by the Stanley Halls. I had always maintained the fantasy that Mr E R Stanley who built these halls (and for whom there is a blue plaque extolling his virtues as a toolmaker) invented the Stanley Knife, but that honour is due to three Americans Messrs Black, Decker and Stanley. Still our British version was a philanthropist and built these very handsome halls complete with Arts & Crafts motifs and started some technical schools (now absorbed by Lord Harris’ academy).

The bus, which had been filling up steadily as we progressed through the back streets, now was really full and after Norwood Junction station even fuller, so we were a bit cramped in our ability to photograph freely.
There is a plaque for Samuel Coleridge Taylor, the second famous Black Briton of this route.
He was named for the poet but had quite a different talent and has a centre named for him here. 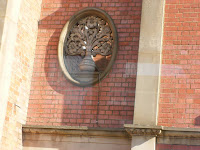 Shortly after this landmark the 410 turns right again, crossing the extensive railway lines into London from the South, and heads more or less straight down Davidson Road into Croydon. Interestingly much housing has been squeezed in between the afore mentioned railway and Davidson Road and the fact that the roads are named Canal Walk and Towpath Way are a clue to more local history. It was a case of too late and probably too hilly, which did for this venture. 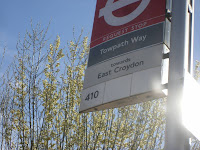 Getting through Croydon is always a bit tortuous, especially for a little bus that calls at both East and West Croydon stations and then needs to head further west.  This involves a lot of wriggling round Wandle Park and the trams, which run in a loop hereabouts. Interestingly though many of the office blocks in Central Croydon were empty and ‘to let’ the little industrial units close to rail and tram ways have been colonised by religion – we spotted both the New Life Ministries and the Mountain of Fire and Miracles.  The latter is a Nigerian foundation, which  places great emphasis on wonders, miracles and other Apostolic acts, which is perhaps why they need an  industial unit rather than a delicate church building? 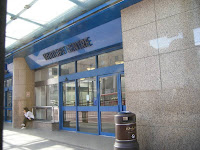 Having crossed the Purley Way  the 410, now of course much emptier having left most of the passengers  at either the Whitgift Centre or Centrale (under which the bus passes) next crosses the Wandle a couple of times and the eponymous Wandle Park as it enters Beddington and the London Borough of Sutton. Round here the poor river is buried under culverts with schemes to unbury it and restore it to its former glory – I believe this has been on the cards for some time so interesting to see whether the money for this scheme will actually materialize?

Wallington Green itself is a conservation area, though that does not mean that the 21st century has not encroached, and while there are no major supermarkets around here, not all the shops are totally in keeping with what was originally clearly a village, This becomes more obvious as the bus comes down Manor Road towards the station , with  some small cottages on one side of the road and higher rise commuter flats on the other. 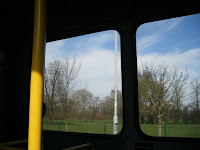 Shotfield, where there are both a library and new health centre being built, is tucked just behind the station and is where this route terminates, about 55 minutes after leaving Crystal Palace, and just right for our key route the  Number 151.
Altogether the 410 is a complicated route to remember, narrow twists and turns with the occasional one-way sorties round Croydon and busy with shoppers all the way. 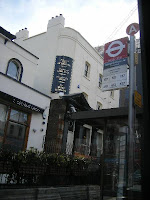