For this Surrey jaunt, Linda and I (Mary being on a brief holiday) were joined by Zara, from the London Councils Press Office.  Some of you may remember that we had met her a few months ago, when we stopped by their offices for a brief media frenzy.  The Freedom Pass office is a bit concerned that people will be confused by the Mayor's new, and very different, 60+ pass, and wanted to talk to us about explaining the differences.  So we invited her to join us, and she did!

Just before we climb on the bus, I will explain, briefly, that it seems the Mayor's Pass will only apply to TfL travel, ie not Birmingham, Barnstaple or Bradford buses, nor non-TfL trains running within the London area, nor buses in the London area  which are not TfL controlled (like the 402, I suppose).  Plenty of scope for confusion, and the risk is that people will phone the Freedom Pass office, not the Mayor's Office, with their queries.  And if some councils cut the Freedom Pass for old people as part of their budget plans (see Lewisham's ideas here)  I suppose it's possible that a 60 year old with a Mayor's Pass might get free travel to and from work, while an 80 year old does not get free travel at all.

I may have all that wrong, but only time will tell. 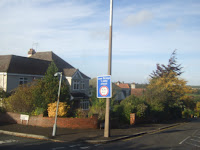 Anyway, after a brief walk from Coulsdon South Station, we boarded the once-an-hour single decker at 10.20, bound for Caterham on the Hill.  We passed the Library, with its fine clock provided by the Rotary Club, and HydroHounds, which offers canine hydrotherapy for a multiplicity of conditions.

We headed along the high street, now available for shoppers, since there is a by pass, and along to the Coulsdon Area Farm, which has a range of activities on its land, past the station and some planned new build homes, and out towards Farthingdown and New Hill which is an area controlled by the Corporation of the City of London. 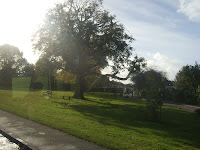 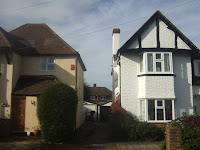 Turning left off Marlpit Lane, we headed steeply up through residential streets, where several houses had been improved by fancy plastering, and we had fine views down into the valley between the properties. We came to Bradmore Green, with its pond loooking rather larger than normal after last night's rain, and so into Old Coulsdon.  There had been no shops among all the streets we had wiggled through, so clearly this bus is useful for taking people to buy what they need.  Narrow, steep roads like Homefield Road seemed to reflect the agricultural past of this area, where sheep could graze on the chalk uplands, while people lived in the valleys and grew their crops on the clay.  Most of the front gardens were hardened, unsurprisingly, given the narrowness and heavy use of these little roads. 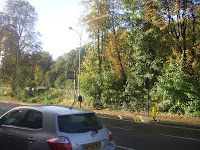 Another sign of the country roots of this area was a pub called the Fox, closely followed by another called the Tally Ho.  we noted that Coulsdon Common was also controlled by the Corporation of the City of London.

This brought us to Caterham on the Hill, and its varied shops;  Ross Cycles had diversified into fireworks, presumably only between now an 5 November. 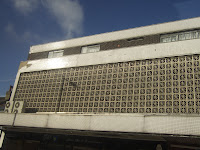 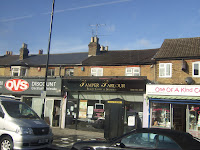 Some parts of Caterham had a really villagey feel, with terrace houses among the shops, but some were less attractive, with flats (or maybe offices) hidden behind concrete screening. 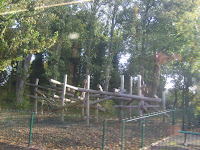 On through, we came to Westway Common, where our bus terminates, only a handful of passengers having stayed beyond the village centre.

The trip had taken just over 20 minutes, and the charming driver expressed interest in our project before pointing us the way to head down the hill to Caterham station where our next bus waited.

We had had lovely sunny weather for this brief excursion through some of the commuter lands of Surrey.