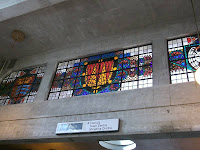 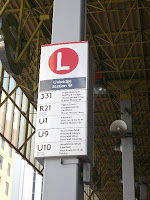 Uxbridge Station and its very tidy looking environs seemed unfamiliar, which is fairly remarkable if you think we have already covered 330 bus routes; research indicates that I did not ride the 222 (Jo & Mary), which is the previous Uxbridge route so I suppose it was fitting that I should be doing this one alone, while they holidayed, hopefully enjoying some sunshine. All I can say of today was that the sunshine was a bit timid, but the rain stayed away. Uxbridge Station has some nice stained glass windows and the adjacent shopping centres, built onto the High Street, looked clean and litter-free even if not overly prosperous. From this you will gather I had some time to spare, whilst waiting for the single decker route, which runs 3 times an hour. 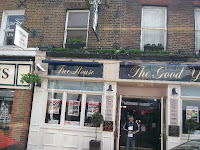 When it came, it stopped almost immediately, with eight of us already aboard, in the High Street where another dozen or so passengers got on. ‘The Good Yarn’ pub opposite the bus stop was named for a well-established tailoring firm previously on this site, now a Wetherspoons.  Historically, as well as being a staging post on the main road between Oxford and London, Uxbridge also gained the Grand Union Canal (just visible as we passed the ‘Swan & Bottle’ pub) where there were numerous mills. The canal connected Uxbridge to Birmingham. Neither of these links is terribly important nowadays but Uxbridge does have the benefit of two Underground lines. 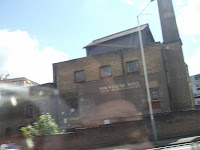 The 331 does a certain amount of speeding past several roundabouts and few stops along the dual carriageway Oxford Road, where signs to both the M25 and M40 indicate where all the really heavy traffic goes. One side of the road was built up with mid-century homes while nurseries (as in plants) populated the other side and some sports facilities – signs for the Denham Village Fayre, and Denham Ladies (Cricket? Football?) – meant we were passing through not just Denham but Denham Green and Higher Denham. One of our followers had informed me that like nearby Pinewood Denham was home to a film studio between 1936 and 1952. Denham’s output includes such diverse gems as ‘A Matter of Life and Death’ and ‘The Arsenal Stadium Mystery’ (there are some who might say this is one and the same). No signposts to this admirable heritage today but various pointers to the Golf Club and station.

A big wall along the road with mature trees and a glimpse of water might just have been the Denham Country Park also known as the Colne Valley Park.

It is quite watery round here and having passed the ‘Horse & Barge’ and then crossed the Grand Union canal on leaving Uxbridge we passed it again by the Harefield Marina. This website shows how little of the extent of the canal life is seen from the roads

Other local sights include the Anzac War Graves, which are signposted, and where over a 100 Australian and New Zealand troops were buried during and after the First World War. The hospital originally built for them now houses one of the UK’s most famous and major transplant units.

Harefield Village retains much of its original charm as a country village complete with Green, war memorial and village pub. The pub’s current naming as the ‘Harefield’ only dates from 2007, but is perhaps more fitting than the ‘Pickle jar’ which it replaced, and the  depicted hare in a field is undeniably more attractive than a jar of pickles. 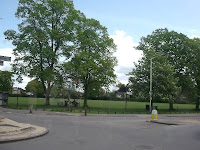 The next stretch of the route disappeared in a blur – not that I was asleep or anything, but with few stops requested once past the Harefield Academy the 331 hit a good pace past the open farmland that survives hereabouts. Passing through more open space at speed and just tipping out of TFL Zone 6 we sped along from one hospital to two others – this time Mount Vernon and Bishopswood Hospitals.  The former has a long history going back to the treatment of consumption (TB to you and me) in St Pancras, then cancer in Hampstead, though since 2009 it has been a Treatment Centre rather than offering acute services.  The Bishopswood is a private resource, named for the local wood, which is still visible from the bus. 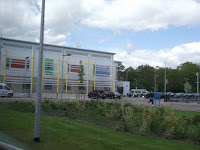 The 331 has to execute two quite tricky right turns to get in and out of the hospital forecourt and then takes a further deviation in order to serve Northwood Town Centre and railway station. Also on the Metropolitan Line, this was built in 1897 and the local housing reflects this expansion. Northwood Station has the most enormous car park, where in fact the 331 was allowed to do a twiddle so that it could head out of Northwood again and back towards Ruislip. 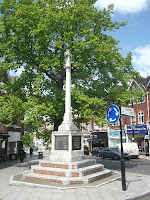 By now we had been underway for the 45minutes estimated at the bus stop in Uxbridge so I thought we might be close to our final destination. However more country lanes and hills were on our schedule (I now know why it’s called Hillingdon, the local authority through which most of today’s trip went). The driver took full advantage of the permitted 50 mph speed limit as we headed out of Northwood by the Gravel Pits open area and then past Copse Wood and the intriguingly named Mad Bess Wood. Local historians have no definitive answer but the likeliest origin would refer to some poor demented woman who either lived or ended her days in this area? 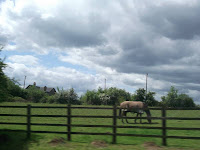 Coming down to the very modern looking   Breakspear Crematorium  (built 1957 with later additions) I was interested to see that it could be used as an ‘overflow’ car park should the adjacent Lido be full. However the  Friends of Ruislip Lido are fearful that recent tree falls will do the council’s work for it.

Just as I was thinking this really should be a Greenline Bus (for those of you not old enough to remember Greenline buses they were the ‘country cousins’ to London red buses and operated on more rural routes – since TFL they have either been absorbed as London Bus Routes as in the case of the 331 or been taken over by neighbouring authorities such as Hertfordshire or Slough) we approached Ruislip via a modest housing development and then into the former village. Ruislip, it has to be said, looks rather less villagy than other landmarks on this route but nevertheless retains a lively High Street.  The station is set back from the road which allows for the buses to park up, and that is what the 331 did, an hour after leaving Uxbridge having taken a circuitous route through the countryside and villages of Denham Harefield and Northwood on what was actually a very memorable country outing after weeks of somewhat repetitious travelling in East London!