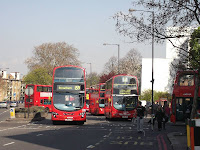 A Southern region train and short walk had brought us from the end of our last trip on the 315 to wait at a lively bus stop known as Telford Avenue but which is really the very busy Brixton bus depot. We know how busy it is as thanks to a photo shoot for an article by the Great Wen last year we had spent some time in there marvelling at the parking skills of bus drivers. Today we had plenty of time to watch them, as they shuffled in and out of the garage. We decided that the 59s and 159s bully everyone else as they arrive every 5 minutes or so. Our 319 appeared on the countdown LED only to disappear just when ‘Due’  ‘Captured by aliens?’ said Jo. 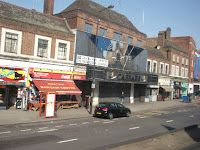 When the next 319 emerged from the garage it turned right and headed north to Brixton – this is a very confusing route whose eventual destination is well north of the river but which resolutely sets off south. The next 319 sidled out of the garage, sat behind a 159 while three of us dodged to board; however, the driver then switched off his engine and disappeared – no room at the inn? 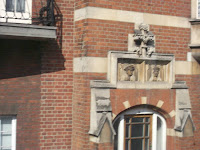 Finally, after about 20 minutes all told, the third 319 seemed prepared to take on passengers. The next glitch was Streatham High Road heading south, which was more or less at a standstill, due apparently to some road works further down the hill. This gave us all too much time to note the dereliction now very obvious in the buildings that once housed Caesars (gone but not forgotten)  and the Bowling Alley (there’s a new one due down by the swimming pool). At least the cinema (which used to have a car park that smelt strongly of pee) has been turned into housing going by the name of the ‘Picture House’. 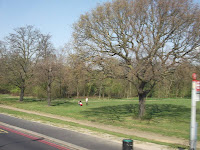 Once past the English Martyrs and St Leonard’s churches, our driver in his rather squeaky elderly double-decker, with competition from a variety of white vans, had to negotiate a couple of tight corners to start heading west, starting with crossing the end of Tooting Bec Common , a part of the route shared with the 249. By now we had been joined by another 319 though interestingly both of them were quite full. Jo joined me on my seat so some children could have the other front seat, on what looked like a holiday outing.

At the Northern Line station the 319 continues straight ahead along Trinity Road lined by fine houses – once multi-occupied and neglected but now evidently seen as more desirable single occupancy  properties. This becomes ever more evident as we approached Bellevue Road and Wandsworth Common station, an enclave where several boutiques and delis have sprung up including ‘Tickled Pink’ and ‘Bellevue Rendezvous’ reminding us of Sylvain Chomet’s wonderful animated film  'Belleville Rendez-Vous' (or how to train your son to win the Tour de France).  Most attempts to glean further information on these shops landed me in such unutterably smug websites that I refuse to link to them. 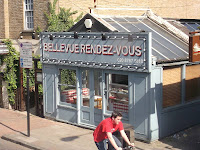 It was to continue thus as the 319, unique route at this point, does a wriggle round Broomwood Road to then head up Northcote Road complete with more eye catching names: a branch of ‘Trotters’ (expensive children’s clothing), the ‘Underdog’ and flowers from ‘Ultraviolet’. You get the picture. 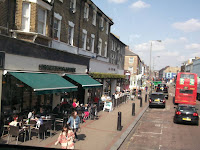 More to the point is that this route more or less follows what the course of the ‘lost river’ Falcon. According to Paul Talling’s research the river rises from two near by but different sources, one very close to where we boarded this route; it then follows through Tooting Common where it is joined by another stream formerly the Hydeburn (we lived in Hydethorpe Road once) before flowing through the Northcote Road ‘valley’ which as you can see from this photo does indeed dip in a most satisfactory way.

The Falcon pub still stands at the major crossroads at Clapham Junction today, partially obscured by remaining road works. Compared to the rest of the trip this sometime bottleneck went fairly smoothly and soon we were heading down to the River Thames (as the late Falcon would have done) and to Battersea Park Road. This part of Wandsworth Borough remains very mixed – there are extensive local authority housing estates built in the Sixties to compensate for war-time destruction, though given Wandsworth’s often Tory complexion some have been sold off. In between are what would have been workmen’s cottages and closer to the river those grand mansions overlooking the park. The mixture of shops – cheap takeaways and vintage frocks – reflects the mixed demographics. I suppose you could say a major influx into this area has happened since the Royal College of Art opened its Dyson building here – there is quite a jolly if frenetic time-lapse film about the building going up, which contrasts with the apparent peace of the site now, seemingly complete 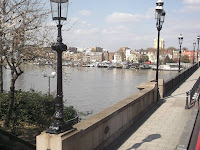 Today we could enjoy at leisure the high tide as we crossed the river very slowly allowing full enjoyment of the view both ways – the additional bonus for Battersea Bridge is looking down on the houseboats and some visiting Dutch barges. 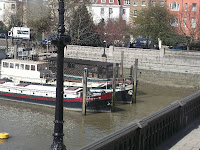 This was to be our last trip along this end of the Kings Road and again progress was slow mainly due to the sunshine at lunchtime bringing both tourists and locals out to the shops. The wealth that is Chelsea needs no introduction and we enjoyed looking into the key holders only private squares that the view from a double-decker permits. This end of Chelsea has its share of blue plaques – one for the totally forgotten ballet dancer and then the more memorable film director (Sir Carol Reed). 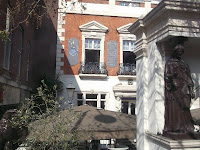 The other remarkable though not memorable aspect of this route was that it was a 3 Cath Kidston store route: we passed the first in Northcote Road and the other two along the King’s Road.  Fittingly the bus finishes in front of Peter Jones having taken more than an hour to make its way here. It being a while since we have been through inner London we had forgotten how slow it can be! 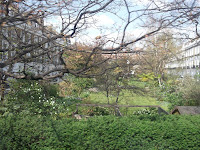