A beautiful, sunny, mild spring day awaited Linda, Mary and me as we stepped out of Arnos Grove Station and onto the 9.50 single decker that would take us to Potter's Bar.  Some buses are less frequent than others, but when they run to the times specified, planning is really easy. 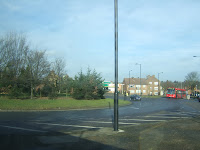 We turned right and travelled through attractive blocks of flats, designed for commuters, given the utility of the Piccadilly Line.  These were interspersed with substantial houses, many with hardened front gardens and multiple cars.  The road headed under the Piccadilly Line and on towards the large Barnet cemetery. 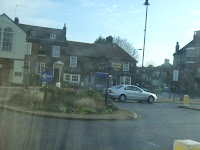 As we came into Southgate, we noticed hat there was a Walker Cricket Club and a Walker Primary School: these are named after a long established local family, with cricketing links.  A couple of the houses had the local authority plaques on them, registering what building had once stood there, or what existing buildings had been used for.  Clearly Southgate Green is a community proud of its heritage. 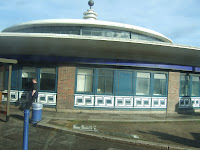 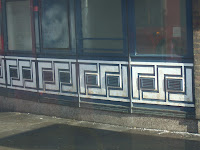 We passed the Southgate Masonic Centre, as well as Leigh Hunt Drive, named for the local poet, and then reached beautiful Southgate Station.  Its curved shape and attractive detailing are a delight.  The next time underground stations were built with this kind of pride was, I suppose, the Jubilee line. 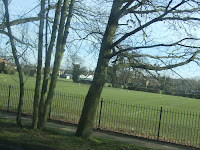 Among the many green spaces on this trip, we noted the Saracens training ground, with its peculiar little clock tower, and then we were interested to pass the headquarters of Chickenshed.  (Its own website does not give you much background detail, hence the Wikipedia link) 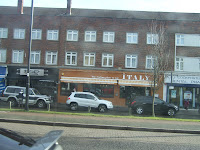 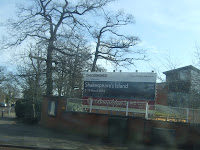 We could tell we were in the smarter part of Barnet when we passed a fish shop called 'Poisson' and we were also entertained by an Italian restaurant whose offers were all in Italian - antipasti, pizze, pesce -until it came to 'Brunch'.  We have a feeling that Italians don't do breakfast, let alone Brunch, and so may not have a word for it 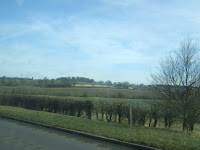 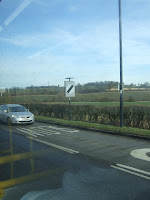 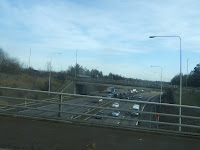 Suddenly we were out into what appeared to be real countryside, with horses and even a few other animals and, most surprising of all for Londoners, a genuine delimit sign:  we don't see many of them!  We had entered Hertfordshire, 'County of Opportunity', it says on the signs, and soon crossed the M25 to head along the A111.  We were going fairly rapidly, passengers clearly wanting to get into Potter's Bar itself. ( I had better mention here that some signs HAD the apostrophe and some did not, so I have gone with it)

We were interested to note that Skechers (american shoe makers and sellers, I am wearing some as I write this) have their HQ or at least a corporate building here, though our fellow passengers wanted the enormous superstore rather than shoes.  We also spotted a tattoo shop which offered laser removal as well as the actual art works. 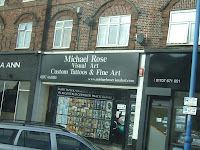 A detour took us into the station and out again:  in the evenings this is where the route terminates, but during the day it goes on into the Cranbourne Industrial Estate, and so, of course, did we.  The route was listed as taking 35 minutes and in fact took only a little longer, dropping us, and the other two passengers, at around 10.30.

I suppose any trip would have been great on this sunny day, but this had been really attractive, taking us from the north part of London into what you might almost call rural Hertfordshire.