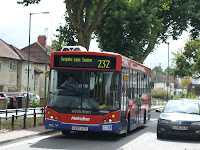 Two buses serve the Pitsfield Road bit of the St Raphael's estate, and so we combined the two, taking the 206 in and the 232 out.  Mary and I had the pleasure of Renee's company, standing in for her absent daughter.
Again, we had barely finished one journey when our next bus arrived.  The 232 driver seemed uncertain, as he approached the stop, whether he was ‘out of service’ or actually going to Turnpike Lane Station (which has to be in quite small print to fit on the front of the bus), but happily we were off shortly after noon. 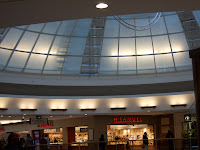 This was another single decker bus, not surprising, given the residential areas we were going through, and the three of us had only a few fellow passengers as we headed back the way we had come on the 206. To our surprise, we paused soon after setting off,  in Owen’s Way.  The driver announced that he had been told to go ‘out of service’ as far as Brent Cross and then pick up the route from there, but he would take us if we were going to or beyond Brent Cross.  A brief reference to the Project rules (you may recall that Linda said that they were whatever we said they were) brought the conclusion that as long as he followed the route, whether or not he stopped was immaterial, so we stayed on.  A very nippy journey therefore got us to Brent Cross, crossing the 32 route, in about 15 minutes, and we alighted to make use of the facilities at 12.20. 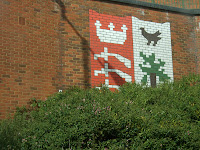 After lunch, we said goodbye to Renee, because the 142 is very convenient for her return journey (and Turnpike Lane isn’t) and climbed back on another 232 at 13.20.  We belted straight along the North Circular, from Brent into Barnet, the graffiti reminding us that we were in Tottenham Hotspur territory, and past signs for the New River Walk.  (which we again recommend warmly to anyone who likes to walk) 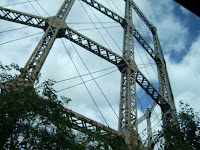 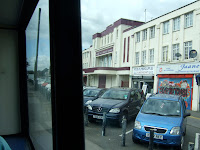 I was getting quite excited at the thought of passing Eliza’s street, but of course we turned LEFT at the Bounds Green Road, where the splendid gas holders loom, for a little tour of parts of Enfield as far as Arnos Grove Station.  Returning to the denominational theme of our previous bus, the 206, we passed the Kingdom Hall of the Jehovah’s Witnesses, before heading south and crossing back over the North Circular at a rather handsome Polish Pub. 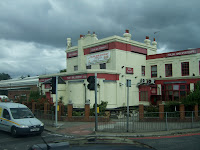 All that was left was to complete the slow Green Lanes experience to reach Turnpike Lane Station, where we ended our journey at 14.10.
Three buses today and not a single blue plaque.  These buses were going through residential and shopping areas, which were interesting but not heart-stoppingly exciting.
at 14:25