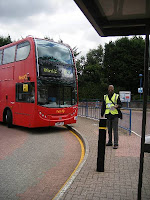 11 AM and already on our second bus – we were well ahead of ourselves today, so when a nice young man approached us in Chingford Bus Station, or station forecourt, to ask us to answer his questionnaire we were more than happy to do so – it also filled in the 10-12 minutes between buses as we had narrowly missed one. The questionnaire was mainly about the amenities of the bus station – it seemed clean and airy enough but did lack a toilet, as we pointed out. Jo explained the Project to him and then proceeded to shock him by saying we could well be dead by the time we finish.

We had been quite taken with Chingford on this our first visit; though it proved to be something of a flying visit as we finished with the 97. Chingford, though largely sporting smaller Thirties-type properties, one even a bungalow complete with Lych-gate, seemed to have a villagey feel accounted for perhaps by the Village Green complete with rural sounding pub – the Bull on the Green, though in reality its upper stories are quite derelict! So much for the villagey feel – Googling the local paper suggests that not all the local residents love
this particular pub .... 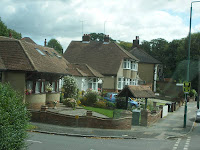 The bus was filling up quite rapidly and it suddenly dawned on us that all these young people were heading towards their schools and colleges to pick up their GCSE results – they are not a demographic we normally travel with as they tend to be studying while we’re riding but they were out in force today exchanging information about their grades.

May be Chingford is an illusory village but Woodford felt even more rural, coming complete with duck pond, village green, village sign (missed that one) and the very southern edge of Epping Forest, which the bus edges along whilst weaving its way on Whitehall Lane. The schools look equally old-fashioned – we’re used to seeing all the new builds in Inner London so to see an ivy clad Bancroft’s or even a mid 20th Century Woodford County Girls School made quite a change. Woodford was of course the parliamentary seat which Churchill held for many years – he is commemorated in many ways through out the Woodfords – he seems to have or run an estate agents and a café, but most significantly he has a good statue on the Common. 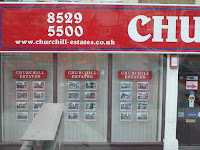 Heading south all the while the bus takes a left turn towards South Woodford Station. The George pub at the end of the road seems to give its name to a small shopping centre – more passenger traffic here. What was more impressive however was the beautifully restored terrace of ?early 19th century houses complete with Terrazzo flooring and canopies. Inevitably they have been taken over by the local doctors and solicitors but look pretty nevertheless. 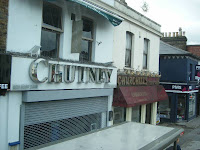 The 179 does a little loop to take in the station and seems to be the only bus hereabouts except for some W routes (we cannot bear to think how old we will be on getting to those!) and then emerges at the local landmark that is Charlie Brown's roundabout.  There are many photographers who have taken better pictures than us.


The only interesting thing about OUR photo was how clearly it showed the ‘storm clouds gathering’ – we hope you all get the reference for our Churchillian blog this week – and indeed before we had crossed over the River Roding and back into Inner London courtesy of Newham borough it started raining quite hard. 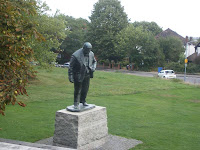 We are quite familiar with Gant’s Hill and especially its long term road works and were pleased to see the progress today – it looks like the last ‘cosmetic’ stages of the operation with the planting of the central reservations and even more grandly the actual Gants Hill roundabout – compared to previous visits much improvement in evidence though seemingly completely lacking a cycle path? 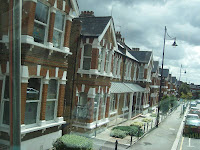 PS By the time you read this actually smart and complete!

This bit of route is quite familiar to us and we welcomed again the greenery, which is Valentine’s Park – there was another school nearby and again the young people were streaming out clutching their results envelopes. 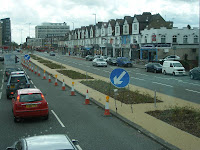 Valentines Park means we are approaching Ilford and again the ‘Great Spoon of Ilford’: the name of this Wetherspoon pub recalls the famous Elizabethan actor, Will Kemp, who danced his way from Norwich to London in 1600. Kemp successfully completed the 80-mile route in nine days. He stopped in Ilford for refreshment, where the measure of ale was known as a 'spoon' (about two pints). A 'great spoon' was even more refreshing.
In case you have neither acting talent as Will Kemp, nor his stamina, neither did you get the results you hoped for the ETGS also offers courses though seemingly not for free. 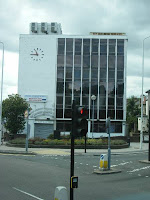 This approach to Ilford Town Centre is a well ridden path and the bus organizers have Ilford well sorted so the traffic flows in a biggish one-way loop round the High Street and adjacent civic buildings such as the library and cinemax.

Not much of this route seemed that new to us, except right at the beginning, but it was novel to visit Chingford and a while since we had been in Ilford … not that there was much river fording left in this route, more like weaving its way to avoid the major trunk routes leading East out of London.
at 13:11