We (that is the three of us) had arrived at Plumstead Garage via a rather tortuous route on a dirty, very cold and unfriendly bus that turfed us out in the middle of Eltham Common to freeze further waiting for the next in that irregular service (of which more anon) but it did deposit us at Plumstead garage just adjacent to a 53 all fired up to go – so we went pleased to get shelter on what I believe the Scots c 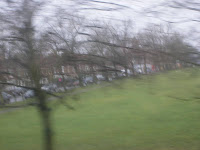 all a 'dreich' day – ‘snell’ too – that is, that quintessentially British combination of cold and wet causing the windows to steam up. We spent much of the trip wiping patches to de-mist, but as our photos indicate barely succeeding: in spite of the very helpful passenger who gave us a variety of mopping cloths, we could not keep things clear – hence the look of peering through curtains of condensation. It was a shame as clearly this route does pass a range of good photo opportunities.

We whirled out of the garage and round various roundabouts and one way systems to the first actual stop – interestingly the 53 goes steep uphill then down again back to the river in an alternative loop round Plumstead. There must be a college round here as groups of students were toiling uphill. In fact this early part of the trip passed at least four primary schools indicating the density of the population hereabouts. Another Brewery Road crosses the Green Chain Walk (enjoy this revamped site looking very seasonal) which covers the green bits of this part of London. The RCCG Victory Centre proved to be a church rather than a military rest home (hereabouts who knows?). We did spot our first Camellia in flower but believe me the photo thereof is unusable!Back down in Woolwich we were bombarded by urges to buy property ‘in the historic heart/dynamic future’ in what is now Royal Arsenal Riverside. With ¼ million beds for sale there will clearly be a major impact on this area. What started as a huge complex of armouries, barracks, dockyards etc one to two centuries ago has gradually been closed down and sites variously now house 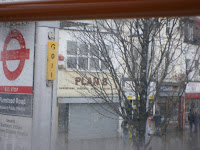 Across the road on the non-river side, not so dynamic Woolwich continues with P 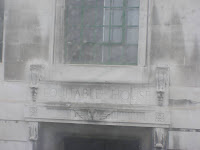 lan B offering us both hairdressing and tattooing service under one roof. The old Woolwich Equitable Building still just about dominates the town centre of Woolwich though most of the core business has moved to Bexleyheath. Uphill from there to the Repository Woods (which still are off limits and with the Ministry of Defence) and onto Charlton Park Road – Charlton Village does really retain its villagy feel together with its Bugle Horn pub, formed of three old cottages. I’m sure there is no shortage of urban foxes round this way, if the ghosts of the huntsmen were to return.

Charlton merges into the fringes of Blackheath (as all good estate agents will tell you) with its Rugby Club and private school, and eventually down Blackheath Hill to Deptford. Crossing Blackheath can be lovely but all we managed to glimpse was Wat Tyler Way reminding us that he led his fellows to challenge King Richard II, in what was later generally known as the Peasants’ Revolt (or Pheasants’ Revolt, in ‘1066 and All That’). The King rode ‘out of London’ to meet them (and probably took less time than we did). A hundred or so years later Jack Cade led the men of Kent to rebel against Henry VI but he does not seem to have a road named after him, perhaps because he lost his head?
Deptford and round the one way system at New Cross was markedly jam-free. Talking of jam, the bus between Woolwich and Elephant was jam-packed; with few seats upstairs and people standing downstairs, although often at this time of day we have the upstairs virtually to ourselves. Jam was also our only sustenance, Jo having brought some pots of home-made marmalade. The delays made us so hungry we were close to eating our gifts there and then, but in the end made do with some slightly fuzzy peppermints. The Marquis of Granby, a pub on a prominent corner in New Cross, is one of several named for a popular army commander – evidence of the number of disabled sergeants that he set up as publicans.
New Cross Road turns into the Old Kent Road, and then the New Kent Road and today we covered its full length. ‘Ossory’ Road off to the left always catches my attention and it’s hard to ignore East Street Market. The newer arrivals such as ‘Parillas de Sur’, a Latin American restaurant, add some colour on a dull dull day.

Traffic was flowing pretty well at Elephant & Castle - I was pleased to be on a 53 as it’s always the bus that comes instead of the one I really want so next time I’ll know it a little better. The London School of Communication was extremely busy with students outdoors even on such a cold day.
On past Lower Marsh where Mary recommended a small Sushi place handy for l 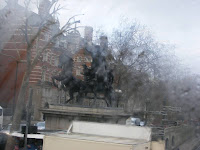 unchtime meetings and then past St. Thomas’s, that other great South London Hospital, and over Westminster Bridge passing Boadicea. Sadly, the bus does not actually finish adjacent to the Horse Guards – I was all poised to take a photo but round the back in Northumberland Avenue it was less photogenic. One hour twenty minutes plus for what is a very long way in not unreasonable and on a warmer brighter day would have been delightful, however that was not the experience today as on disembarking we had a quick, almost undignified dash to Charing Cross to use the facilities and thaw a little.
at 12:30