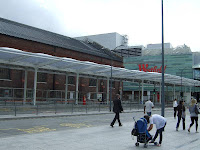 es had led us to the White City Bus garage, which proved to be a spacious, state of the art landscaped area, complete with toilets and enquiries office and a bonus public clock. The buses were clustered according to destinations centred on a turn of the century brick-built temple to the bus – namely the old garage, complete with immaculate internal tiling. We had eaten our sandwiches watching the lunchtime shoppers nipping into Westfield Shopping Centre (which probably paid for the garage renewal). The bus was consistently half full on top mainly with younger people stopping for retail therapy at the many key points along its route.Fortified we set off back to the Shepherds Bush roundabout and Holland Park Avenue – wide and tree-lined with some very grand white houses, especially on the South side. Norland Square is quiet and grand, and was also one of the early locations for the Norland Nanny college, now relocated to Bath. 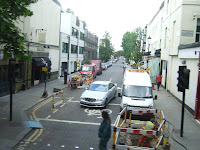 This route was familiar from visiting Sylvia (mother and mother-in-law to today’s passengers) who lived in Clarendon Road from 1971 until her death in July 1997. The boutique shops looked even more expensive than they did in her day (we 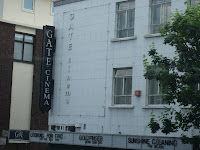 could hear her mutter about unnecessary purchases) but kept us reminiscing till Notting Hill Gate – the Coronet Cinema, originally a Victorian theatre, and the Gate Picture House (older and more independent minded) are both still functioning, and close to the corner is the Gate theatre, where family-member and blog-follower Eliza has performed in her time.
At this point the bus swings left to take in Portobello Road – the market was not very active on a Monday but the shops reflect a well-heeled local population that likes individual rather than mass-produced goods. The mature trees either side also indicate how well established the gardens are, and we crept along Westbourne Grove admiring the villas again. The Gotham gallery intrigues as does the number of roads (and therefore bus stops) named after a series of saints – St Charles earlier, then St. Anne’s, St. Mark’s and finally St. Stephen’s. Are these are remnants of old parishes? Certainly not all the churches remain. Hard to believe this was once dodgy Peter Rachman and Stephen Ward territory back in the day.

Leaving Westbourne Grove behind, we crossed over the Grand Union canal and the Harrow Road, where ? Westminster/Kensington & Chelsea seem to have enhanced the crossroads with public toilets. We felt there must be a story behind the naming of The Skiddaw pub (a homesick fell walker perhaps) as it seemed a little out of place, whereas another pub still sported its very handsome and large Taylor Walker lantern, like this one. 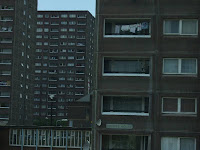 We crept up to Kilburn Park alongside the railway (the Chiltern line all the way) and passed the literary council blocks – Bronte and Fielding, which though tall are still dwarfed by the enormous Victorian St. Augustine’s Church. Alongside that we spotted the RSPCA Animals War Memorial Dispensary though Jo threatened to do nameless things were we ever to contemplate giving her a waif and stray kitten. It’s not that we don’t like Kilburn but we had already been up and down the High Road twice already so to cross it heading towards Belsize Park and South Hampstead* was more varied, keeping the railway still on our right. The Kilburn bookshop offered Polish books, quite a d 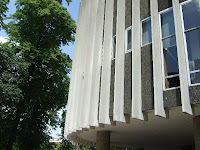 eparture for an area long associated with the Irish community. We swung round the Swiss Cottage one way system, which is the rather run down cinema and the Swiss Chalet pub and rather unexpectedly the bus terminated outside the library (I can remember going there from school* in the Sixties and wondering why all the books by Freud were in the restricted area) and Basil Spence swimming pool.

Boarding the next 31 we headed down Adelaide Avenue which has a high density of Camden housing low and high rise plus some pretty upmarket homes often bought by the Primrose Hill celebrity set. For some reason all the side roads are named after public schools – Winchester, Radley, Merton and of course Eton, leading us to wonder whether Eton still owned the land? Still the bus turns right at Chalk Farm, just ‘en face de’ Marine Ices and for once it was actually warm enough to think about getting off to sample what I think is the best ice cream in London. This approach to Camden used to offer a wider variety of individual shops but now all seems given over to clothing and vintage frocks. The Roundhouse, and its neighbouring concert venue was trailing Oasis and Kasabian upcoming, and the Stables at Camden Lock were just about rebuilt after the fire. However this is a one-way system and we wheeled left into Hawley Road pausing long enough to let us wonder what ‘Quo Sursum in volo videre’ was doing on a pub sign might mean. [Much post-bus Googling leads us to either the intended motto of Minnesota or the actual motto of Lord Adare, but not feeling much the wiser either way!] 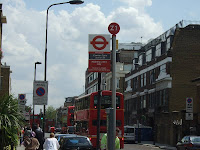 The bus let us off round the back. In comparison to many routes, this intrepid 31 has to negotiate, especially after Notting Hill, some narrow and windy roads with many left and right turns and that’s no mean feat for a double decker – it was some 20 minutes over its expected time of 40 minutes but an excellent trip which I had for some reason eagerly anticipated (perhaps because I often saw it passing but never got on?) and was not disappointed
at 10:38