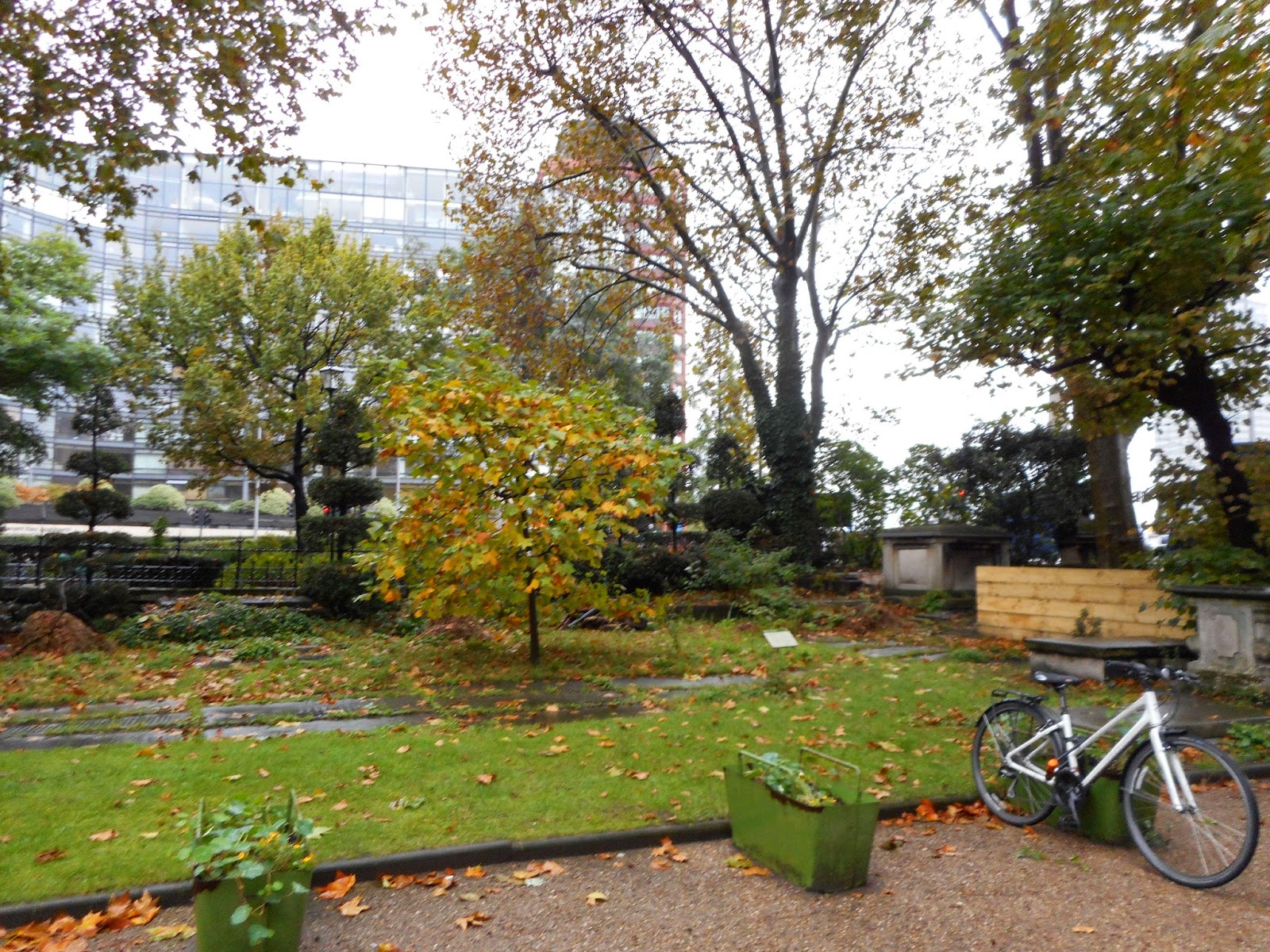 On a day when we had more rain than during the whole of September Jo bravely arrived by bicycle and was thrilled to find that the Garden Museum encourages you to padlock your bike to metal planters decorated with a bike symbol. Linda, for nostalgia’s sake, took a rather tortuous route on the Number 3 from Crystal Palace which spent the early part of the trip hemmed in by all the delivery vans and dumper trucks that are now a regular part of commuting as the property boom is followed by a ‘house improvement ‘ boom which sees lorryloads of bricks and dumper trucks clogging the bus routes.  As there had been a hitch with the sound quality of recordings made at the Cinema Museum  we were joined again by Jo McDermott from the BBC Website team. 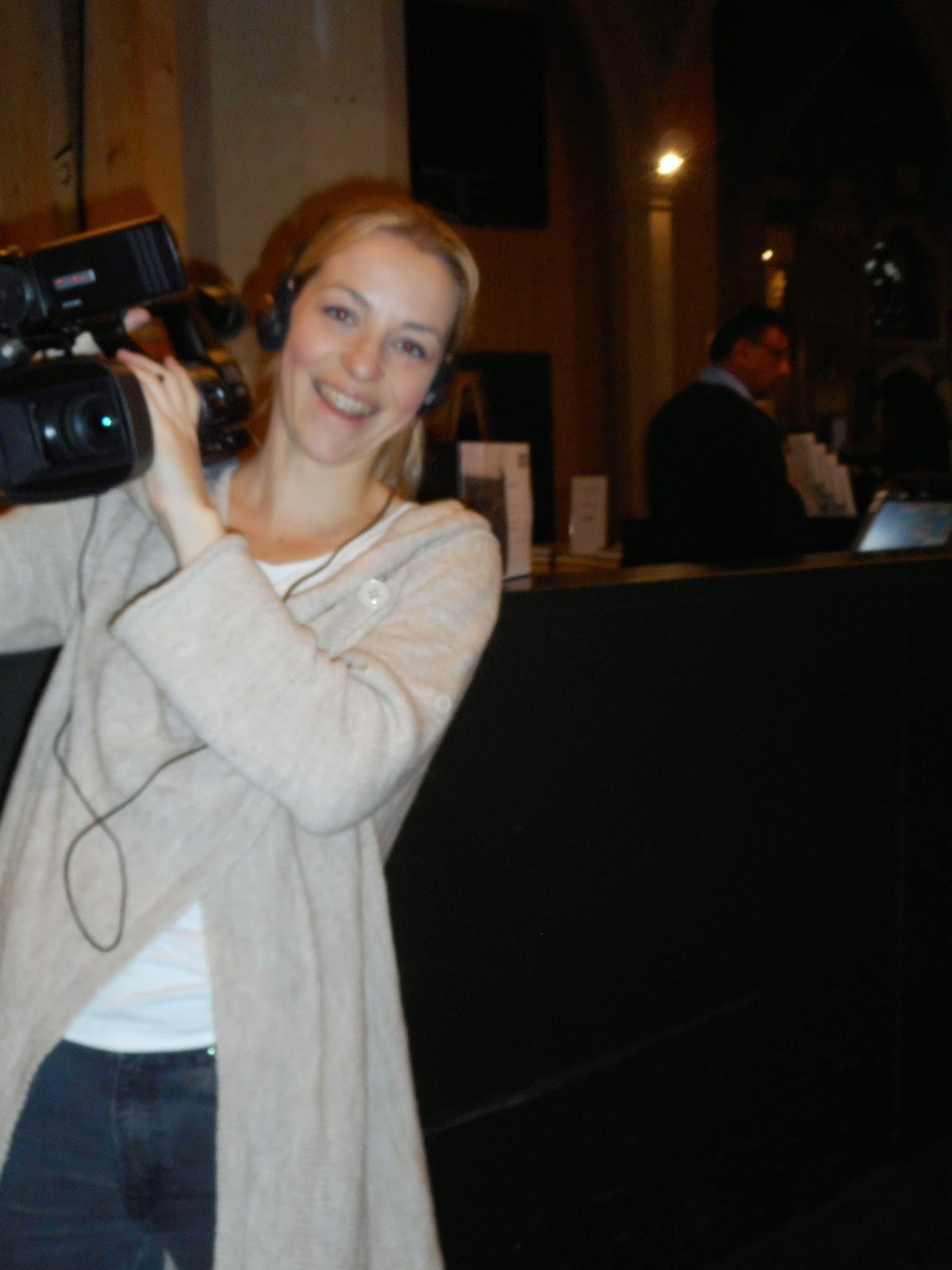 The Garden Museum, previously known as the Museum of Garden History is housed in the former church of St. Mary’s Lambeth,  within spitting distance of Lambeth Palace, which is of course the London residence of the Archbishop of Canterbury We had coffee with one of the Garden Museum’s volunteers who admitted herself to be better informed on the local history rather than the horticultural side. The current building is probably the third church to be built on this site; the original was founded by the sister of Edward the Confessor, as evidenced in the Domesday Book. Through Tudor times, and probably in a newer building, the church was of some importance as Lambeth was an area housing some significant people whose names still resonate with us, providing worshippers such as Ann Boleyn and Catherine Howard (not the luckiest of course). Though many of the country’s Archbishops are buried close to the palace some seem to have found their way into St.  Mary’s churchyard alongside such other worthies as  Bligh Admiral Bligh  and the plant hunters and gardeners, locally based and buried,  the Tradescants. 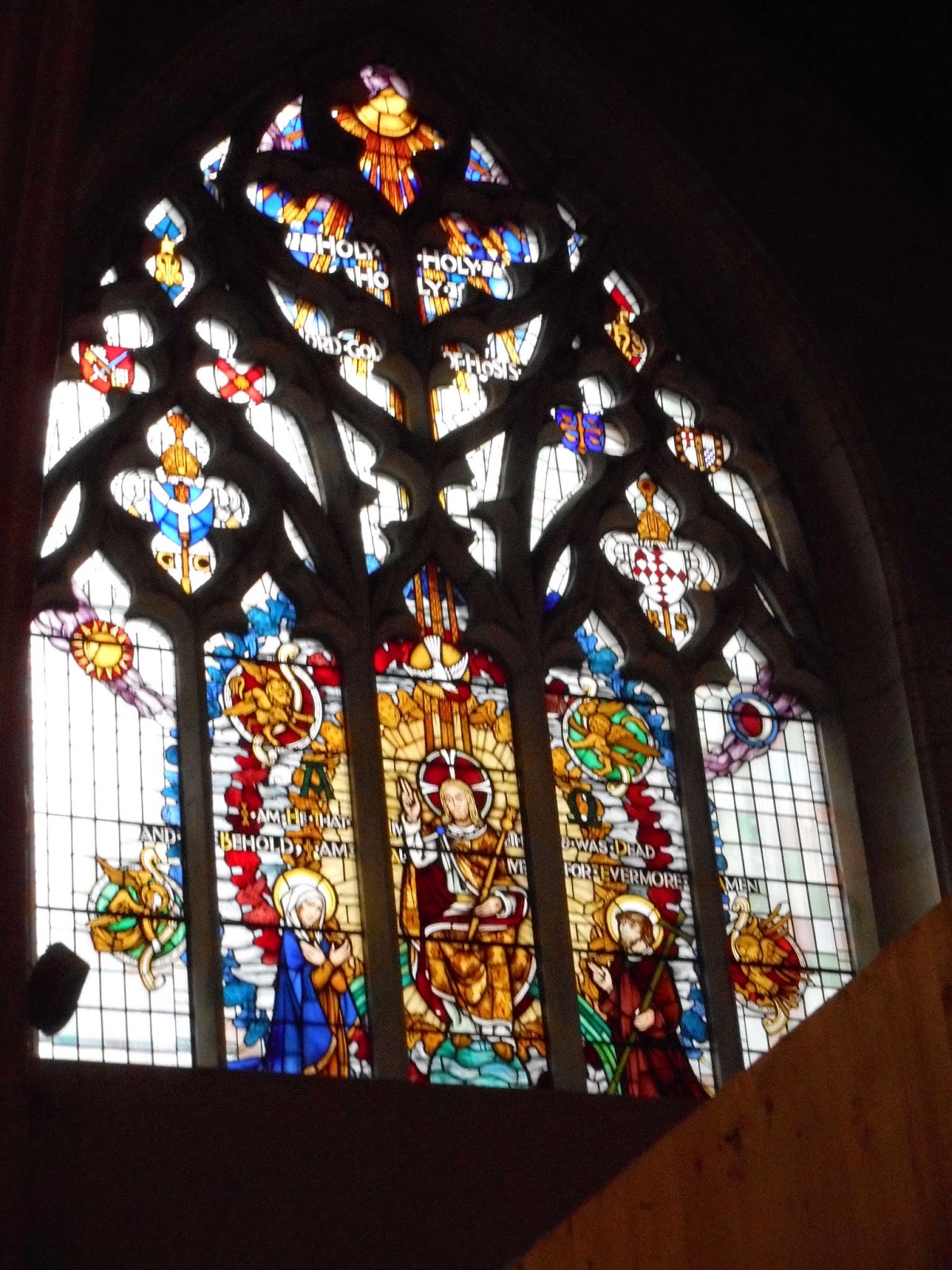 The church was rebuilt in Victorian times and  came through the Blitz mainly unscathed though losing its windows, and then continued as a place of worship until the 1970s – declining congregations eventually led to an abandoned church which was taken over by squatters and the like. Lambeth council was keen to use the space as a car park but some of the local community felt differently. The couple most committed to keeping the church and churchyard had connections with a lady in waiting and word got through to the Queen Mother who visited ‘incognito’ and thought the building and churchyard should be saved, doubtless supported in this by her grandson.  The Museum opened in the 1980s and has largely relied on contributions for its continued existence. While the frame of the church is clearly visible there have been additions to the interior to allow for display and education spaces, the ubiquitous café and shop and access to the upper floor. 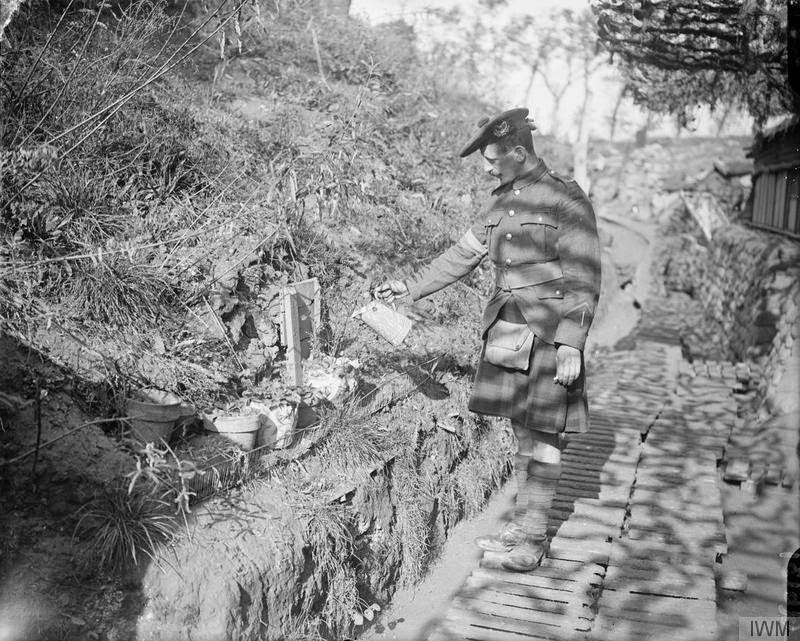 The current exhibition, like so many we have visited this year, focusses on gardens and War, specifically the First World conflict. Yes eventually the parks and public gardens were turned into allotments to produce food as shortages became apparent (German U-boats had a role in this) but also there was gardening at the ‘Front’, even in the trenches themselves. Many of the original photos are courtesy of the Imperial war Museum and can be more easily seen on their website than in our inadequate attempts to photograph them. Here for example is image number Q 6131 – ‘Soldier of the Gordon Highlanders (51st Division) tending his trench garden. Heninel, 23 October 1917.’ – downloaded from the Imperial War Museum website under (we hope) the terms of their non-commercial licence. 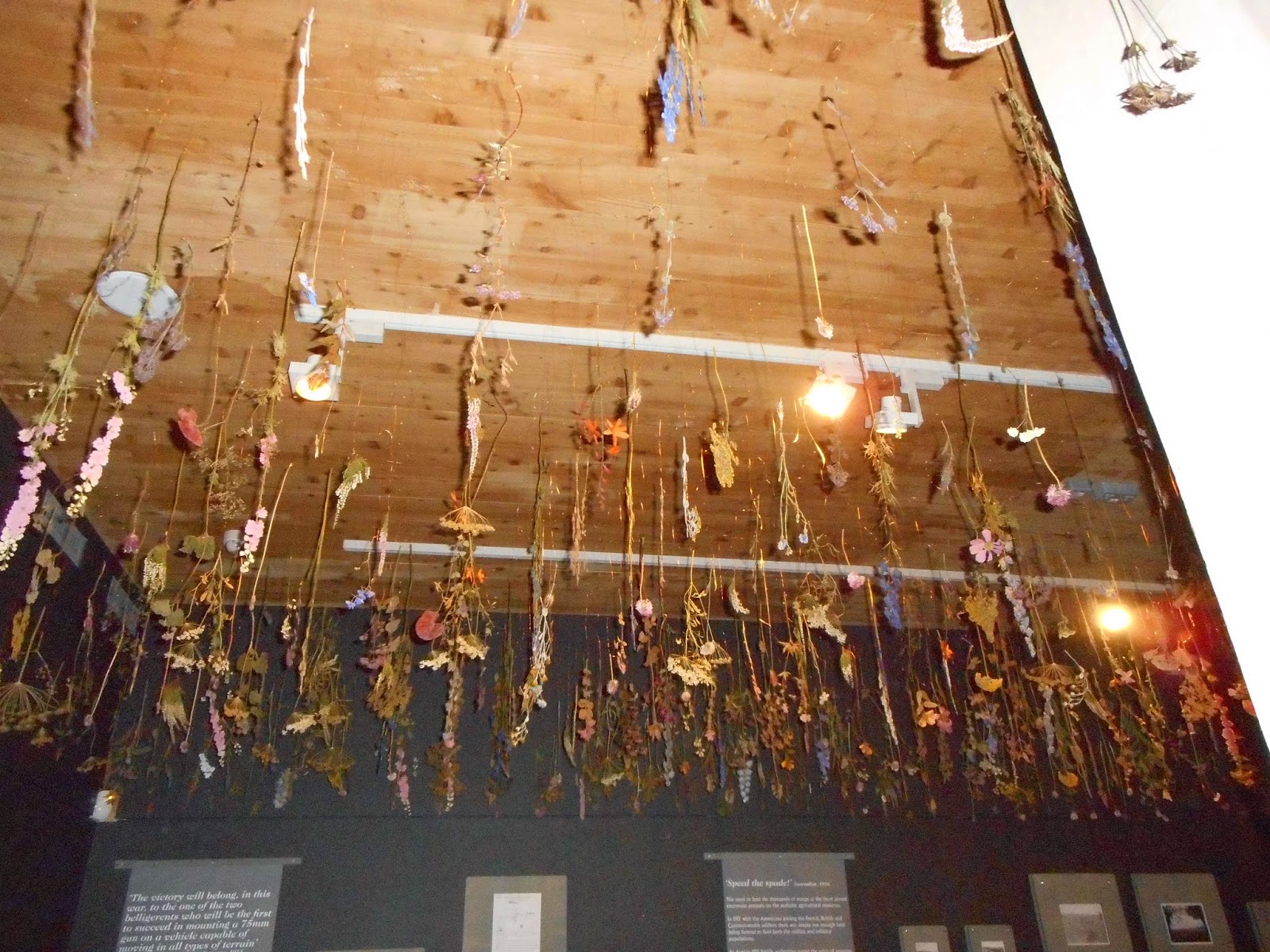 One of the more sinister links between gardens and war is that of the role of fertiliser. My chemistry knowledge is non-existent but as far as I understand it, and this still holds true today, bags of fertiliser with sodium nitrate may do your garden a power of good but equally can be used for more destructive purposes.  The Germans, namely Messers Haber & Bosch, evolved a method of producing the key elements (see what I did there) in an industrial process and then you had not only the basis of explosives but also chemical warfare in the way of gases.

On a more pleasant note much of the exhibition is devoted to the therapeutic effect of gardening on convalescing combatants; Talbot House, named for a dead brother, was set up back from the front
in Belgium and proved to be a place of R&R, later the model for a range of TOC H facilities.  The garden and what it offered was considered one of the most important aspects of the experience.

Similarly productive though in a different way was the experience of UK internees at the Ruhleben Camp close to Berlin. Berlin lies in a very sandy and largely hard to farm area of the country. Initially the internees were encouraged, as food shortages became evident, to farm for produce and so successful did they become (writing home to the RHS for advice and seeds) not just at food production but they branched out into flower gardening and formed their own horticultural club  with all the side benefits of routine/working together/ seeing results that such efforts are rewarded with. This unique experience is very moving.

Interestingly, what we think of as a very 20/21st century (post Diana) phenomenon of leaving flowers outside the home of the deceased is very much in evidence and come to think about it probably predates photography – sometimes we think because there isn’t a photo of it, it never happened. But of course visual evidence make better museum displays than written archives…. 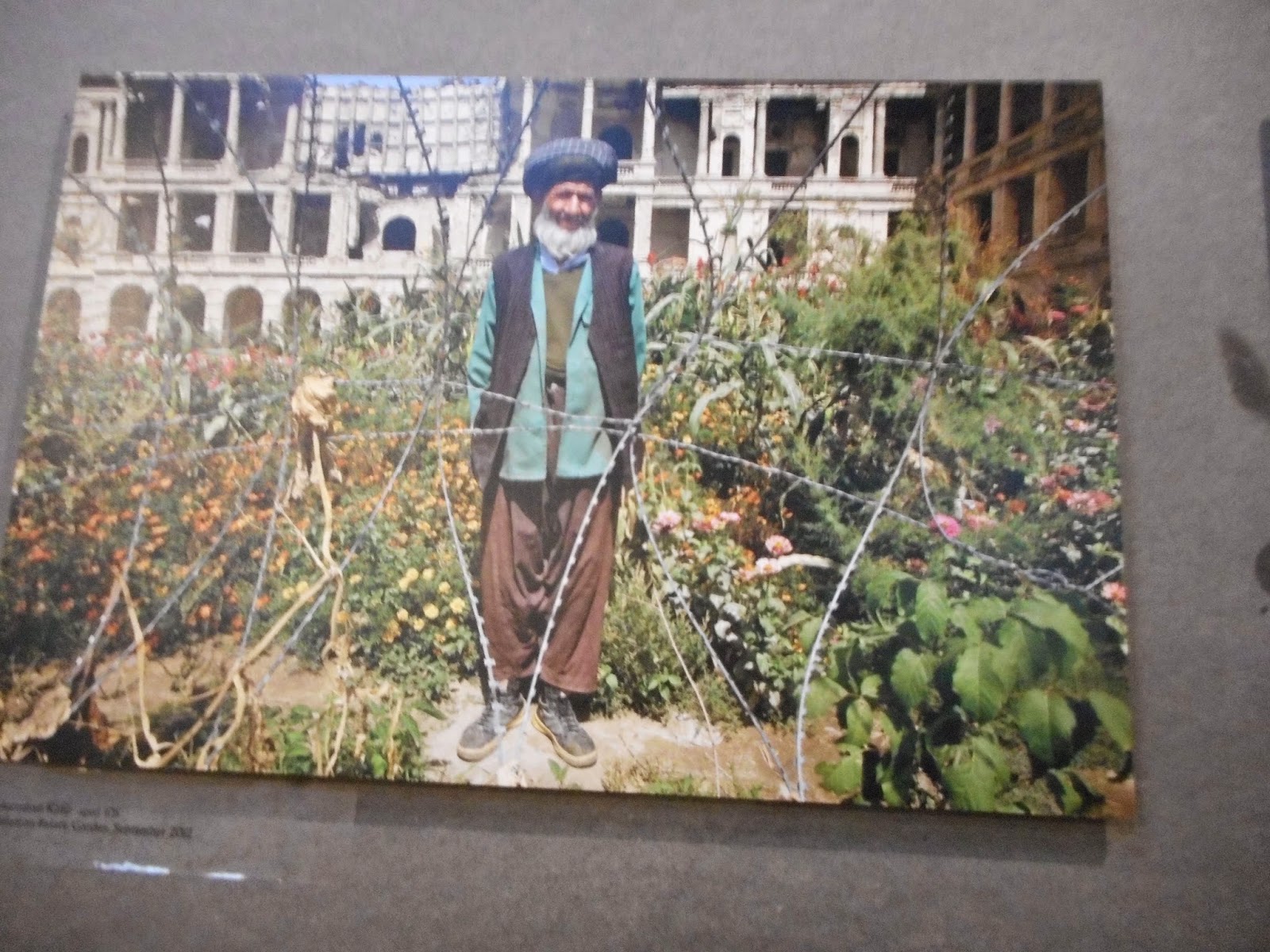 As a postscript to the WW1 exhibition – which is most beautifully decorated with individual dried meadow flowers, many of them poppies, hanging from the ceiling – there are some stunning colour photos (there I go) of gardening in modern conflicts  including Afghanistan, Gaza and Donetsk.

The upper floors hold what we took to be the ‘permanent displays’ which can roughly be broken down into
Tools: Some strange beasts (a cucumber straightener for example) here but others barely changed through the ages. 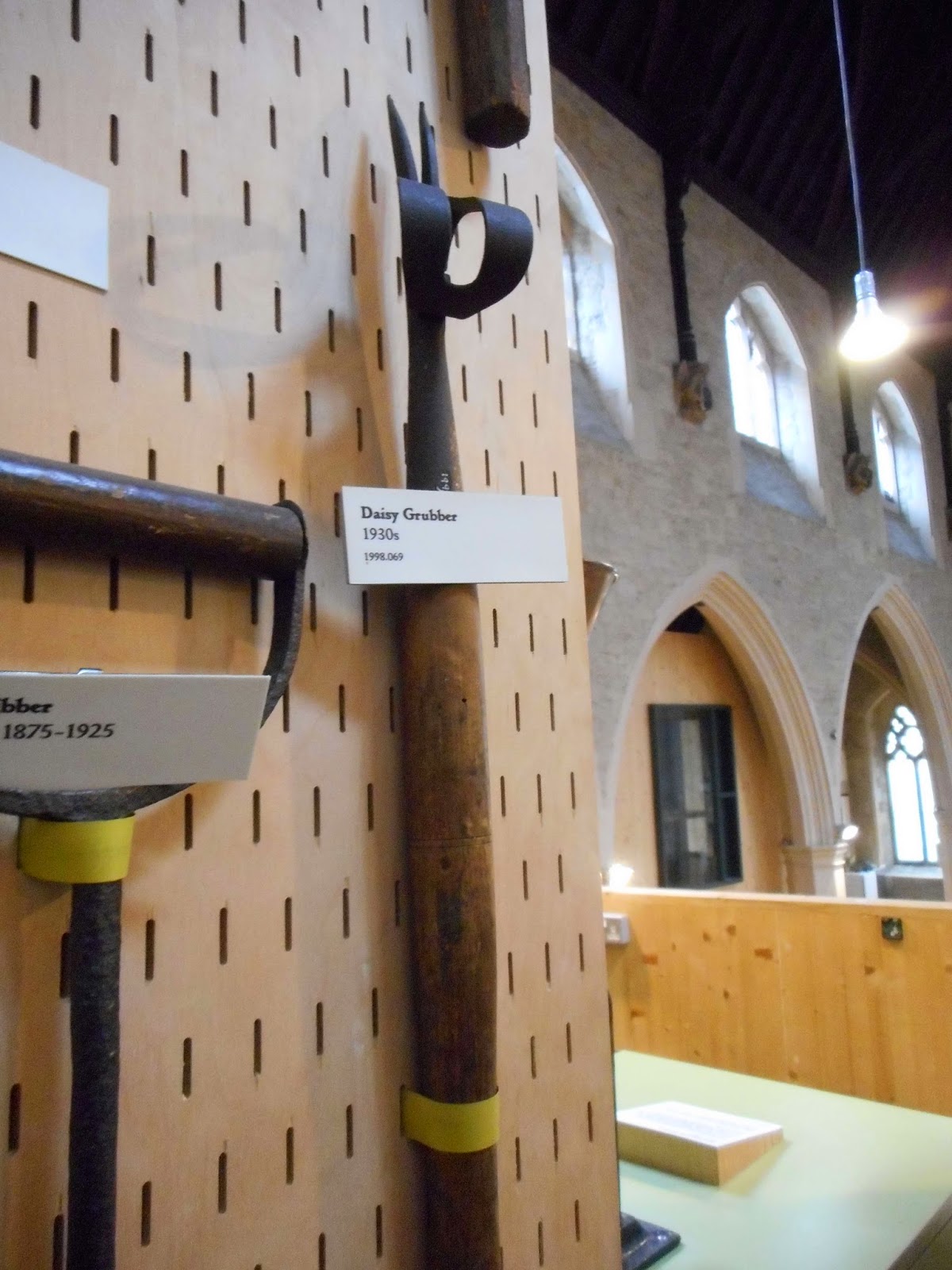 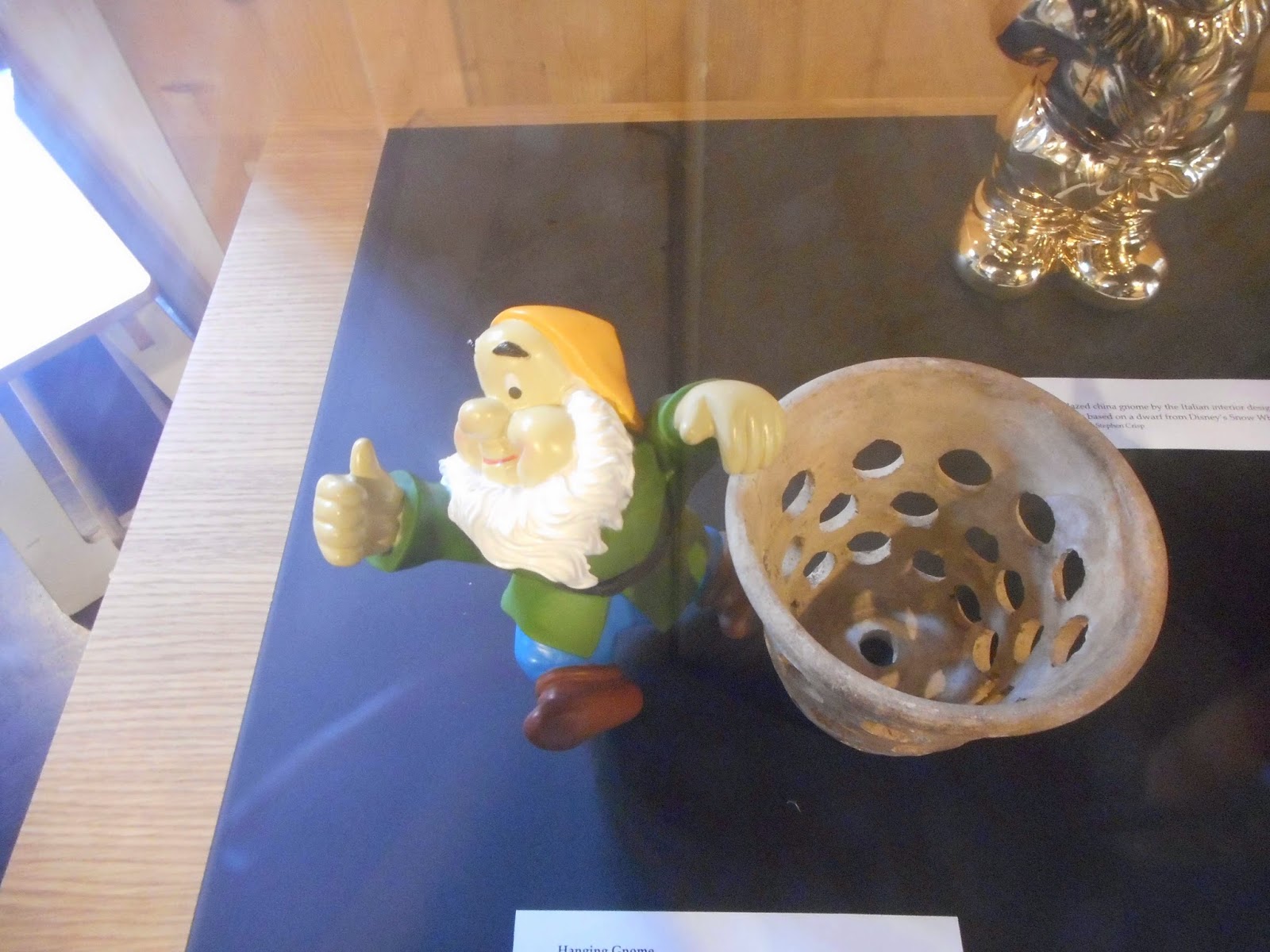 Lawn Mowers : The less said the better as mowing the lawn is always a chore and never a pleasure
Gnomes: Small display of these which means at least the whole experience was not as ‘po-faced’ as it could have been. It is thought gnomes may hark back to the Greek god Priapus.
Seeds and catalogues: Little change here either – earlier versions had botanical drawings rather than photos of what your seeds might produce.  There seemed to be an arcane breed called  'the Student Parsnip'  – difficulty getting up? Bit scruffy? Takes long holidays?You can still get them evidently. 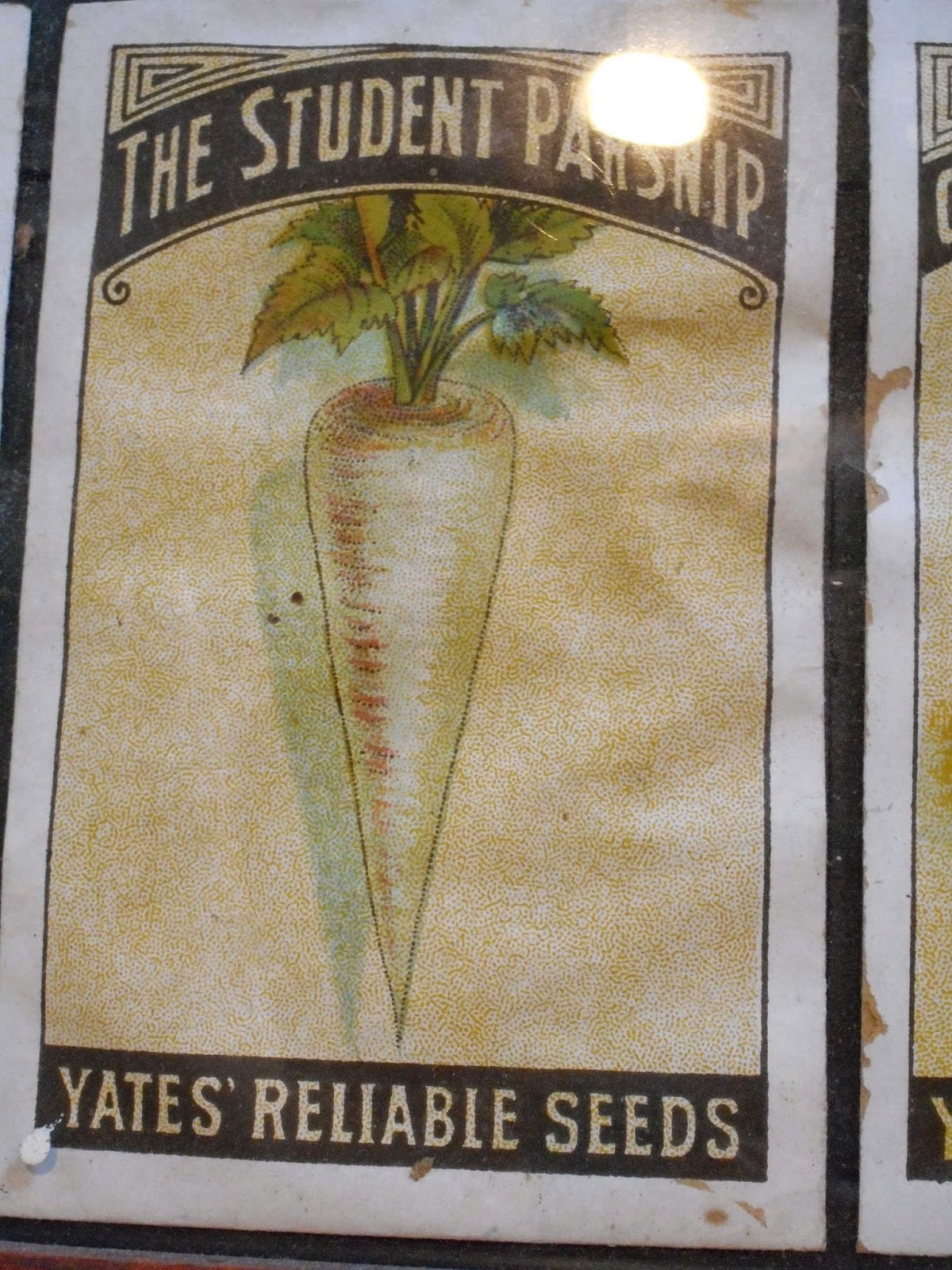 I had never heard of Yates' Seeds with their pretty packaging but gather they are an Aussie firm now…
There are plans for further displays most notably to commemorate the Tradescant Family and their contribution to horticulture, of which there was further evidence in the garden or more properly the graveyard. The Museum has created a knot garden around the remaining tombs of both Bligh and the Tradescant Family but today was no day to linger. 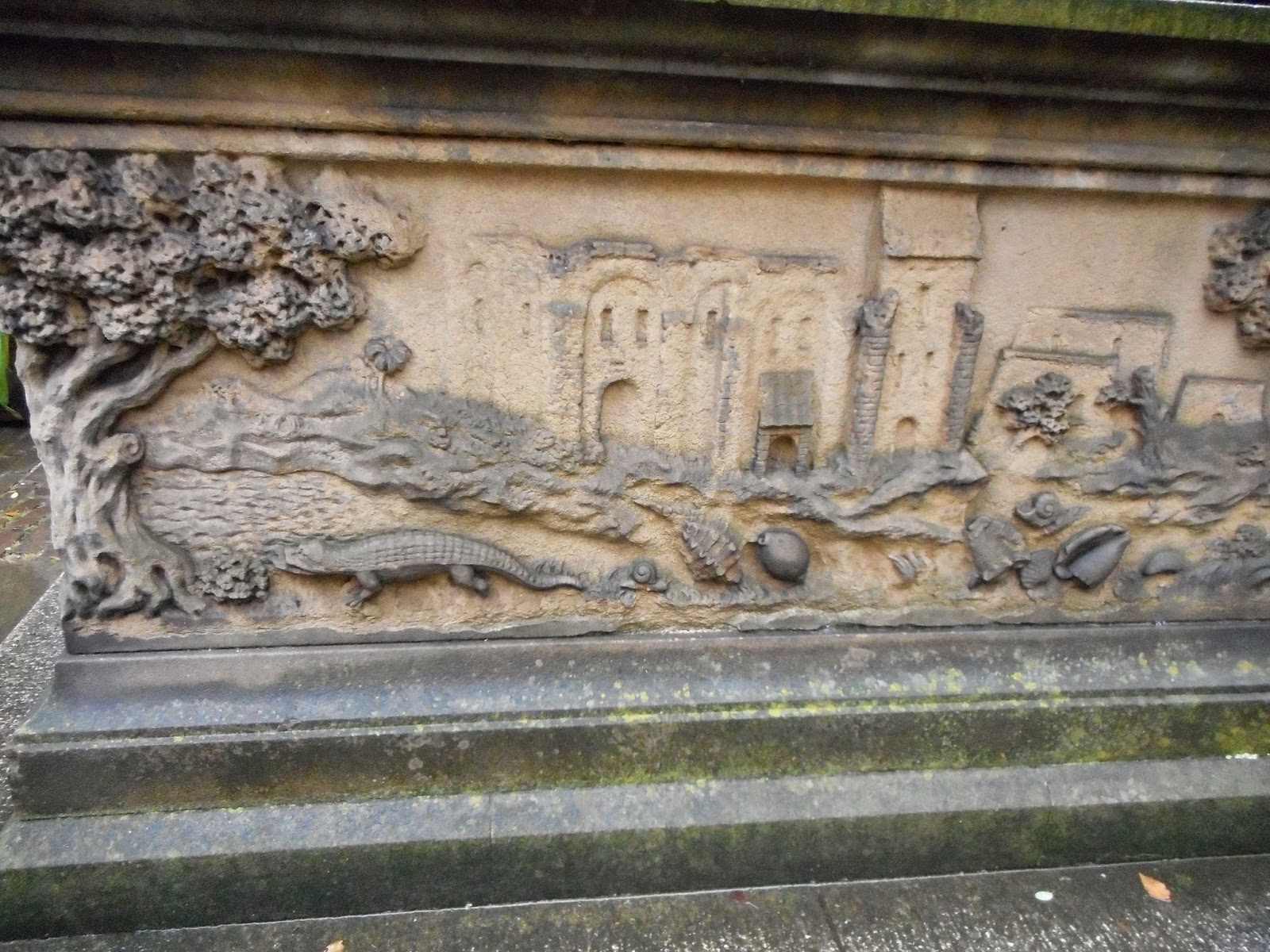 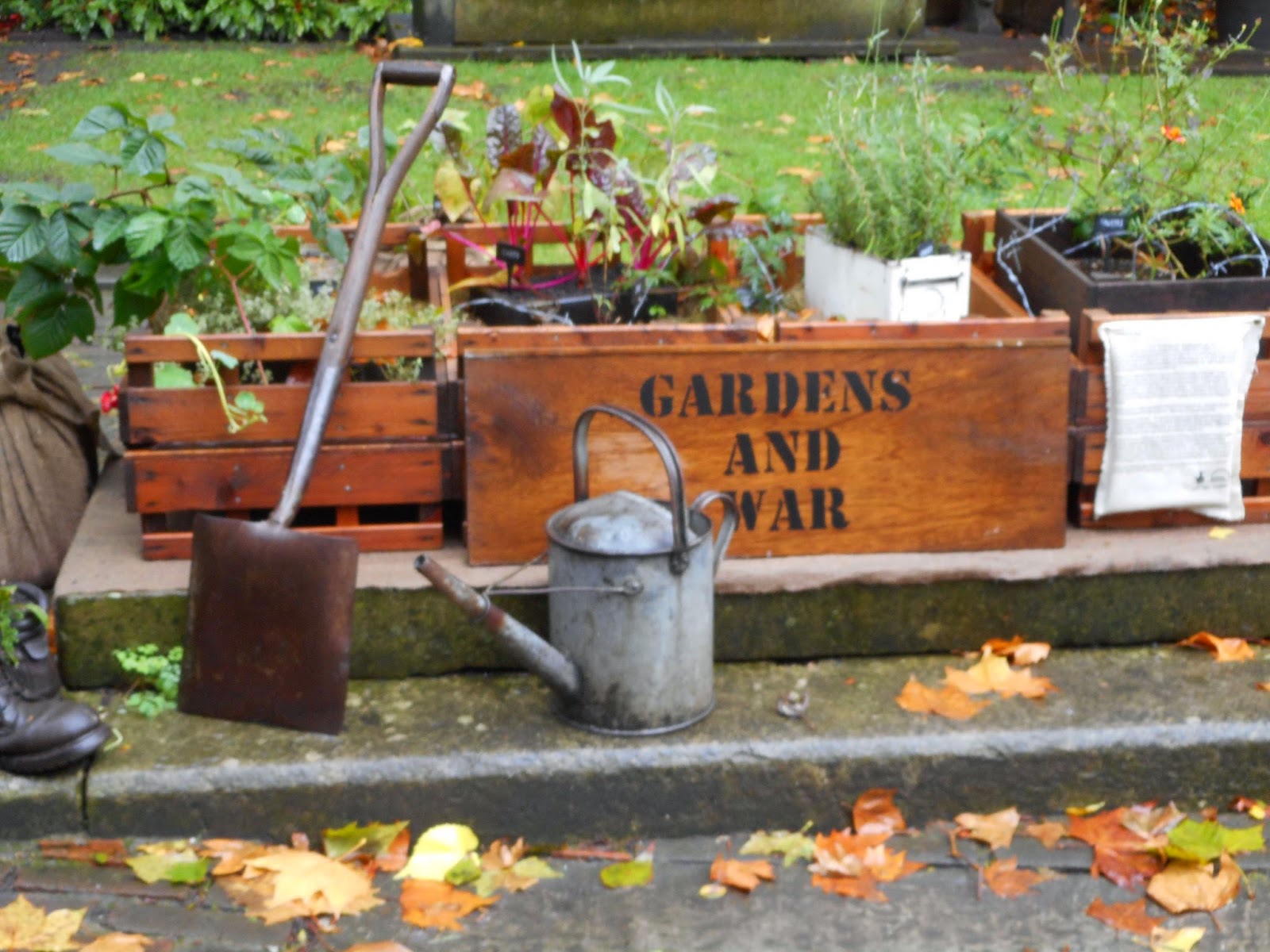 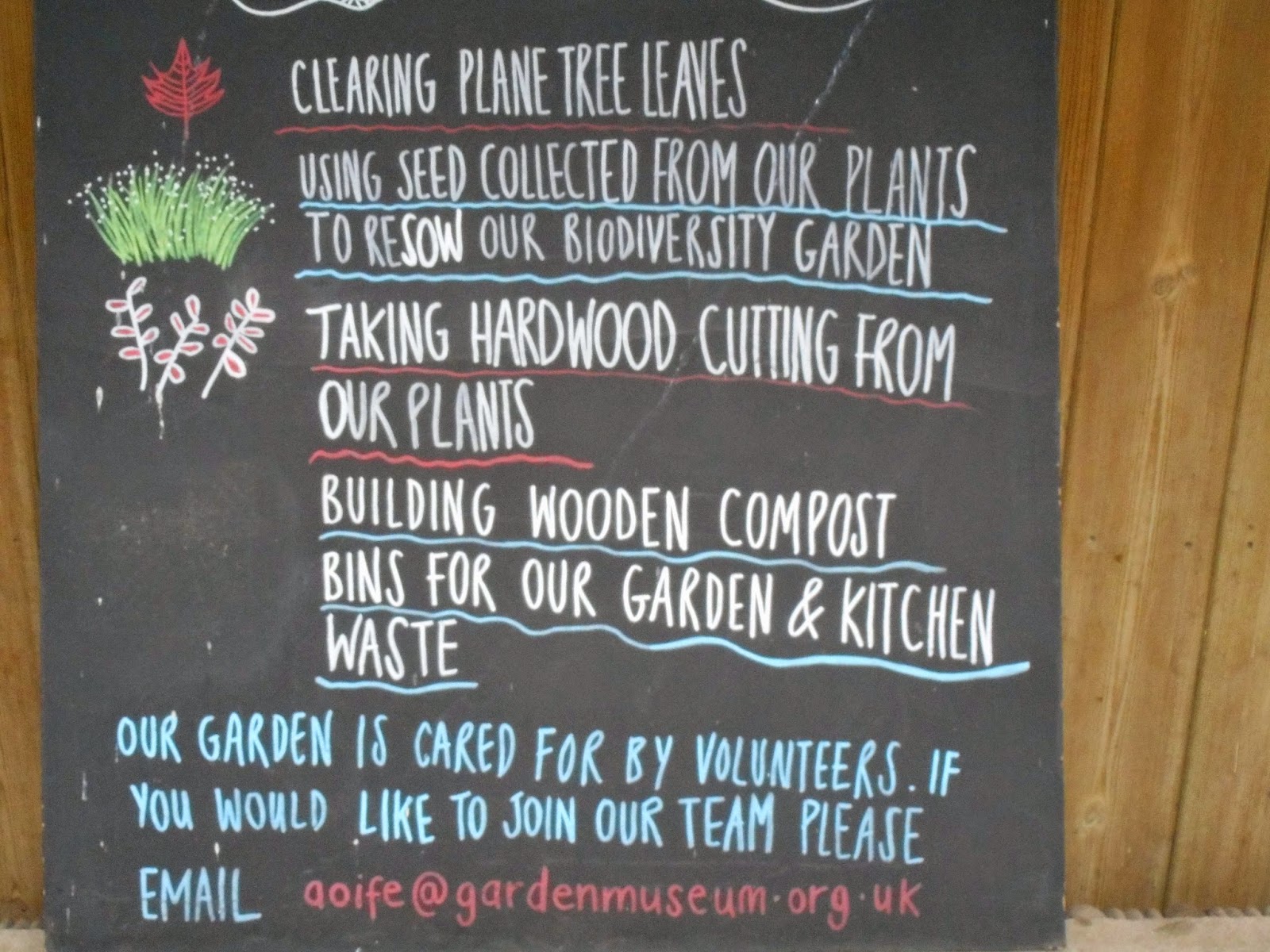 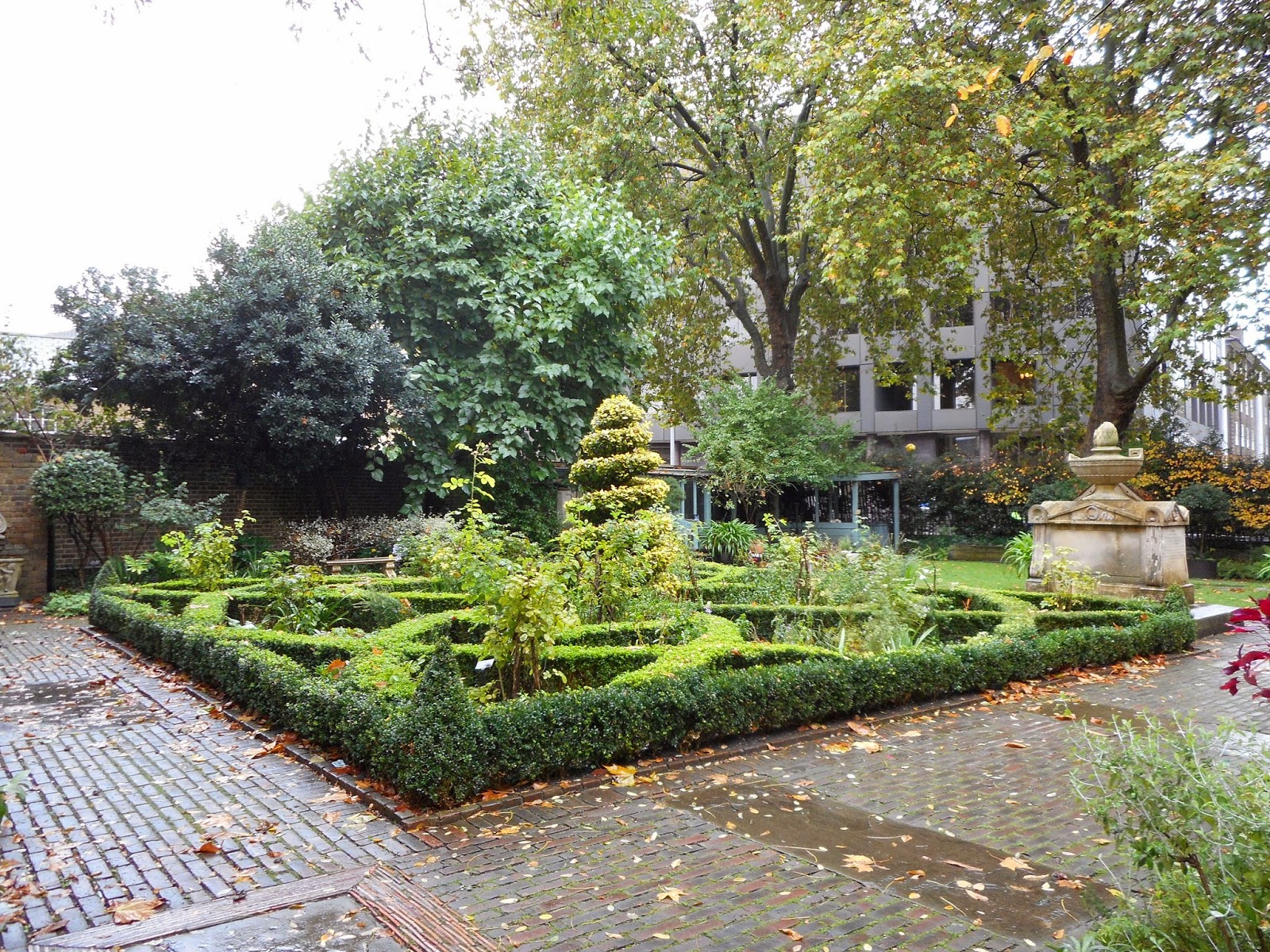