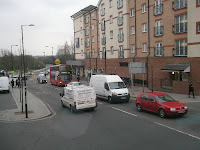 You might term today ‘travelling under adverse conditions’ as we shivered our way round Ealing on this the third route of the day. Though we had initially been pleased to find ourselves aboard a fairly empty double decker, after an hour of no upstairs heating and late afternoon turning into evening on one of the coldest and gloomiest days of the year some of the charms of West London were wearing a little thin. 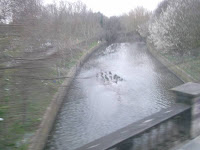 At Greenford we had bounded off our rather shorter E1, crossed the road and straight onto an E3, whose driver though not ready to depart was kind enough to let passengers on to escape the biting east wind. This was not a route which penetrated far into Greenford, and one of its first tasks is to cross the River Brent – incidentally it also crosses the Capital Ring, reminding us we had walked this way in rather brighter weather. 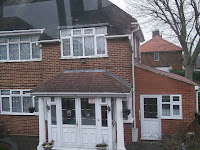 Unsurprisingly the Brent gives its name to one of the shiny new schools the bus route passes, by this time already empty of its pupils. We turned right, heading determinedly back into town and passing through Hanwell. Here there seemed to be a mixture of housing with what looked like a cottage style public housing on one side and the same era small semis on the other. Many of the latter had had their windows replaced (for which I am sure they were most grateful today) though one or two had opted for some rather bling-effect gold leaded paned ones. 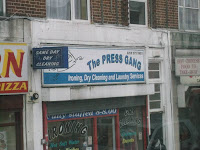 As the lane approaches the railway lines we passed (again) the Press Gang offering a dry-cleaning service and the Cuckoo Café – there was a notice dubbing this stretch ‘Poets’ Corner’ which is just about admissible as we counted three major poets after which the side roads had been named.  As the route closes in on West Ealing it passes three churches within spitting (I know – an offence) distance of each other: one Methodist and nicely cleaned, one more modern and definitely Catholic and we could not see whose team the last one supported.  In case you were feeling short changed there was a Bible Reading Centre also. 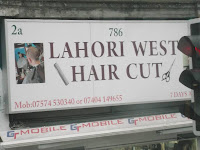 Not far round the corner, Hanwell plays host to cemeteries for two of the Inner London big players, namely Westminster and Kensington and Chelsea, more or less face to face across the road, both laid out in the mid nineteenth century.

This being an E number bus (and therefore full of additives?) we avoided the mainer routes so left the ubiquitous Uxbridge Road soon to turn left into Northfield Avenue which became what we might describe as ‘alternative Ealing’   with the Chinese Medicine outlet, the allotments, Cheddar Deli and ‘The Owl & The Pussycat’.  Mr Cheddar Deli may have a way with cheese but I am not sure he has a way with words, while the Owl & The Pussycat is that ever rarer thing – an independent bookshop. 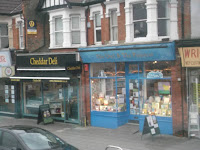 Less alternative was the sign to ‘The Walpole Collection’ – we thought it might be some documentation or exhibition for the eccentric builder of the not so distant Strawberry Hill but it actually proves to be a very exclusive development, admittedly one of restoration as well as new build 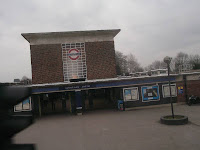 By this time we were approaching Northfields Station, recognisably on the Piccadilly line by its neat, timeless Holden exterior, even if it is forgettable as ‘one of those stations you pass through’ en route to Heathrow.  The nearby Plough was celebrating the budget with a chalked blackboard giving thanks to Mr Osborne for his penny off a pint. I really think that’s going to save the economy – not.  Nearby Julien Road prompted Jo to say that perhaps he chopped his wife into neat little slices. 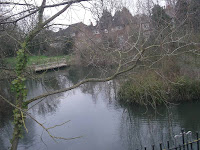 Popes Lane brought us into Acton via Gunnersbury and its Park, wherein lies the local history centre and museum. It is a mansion-type home which had been through various owners finishing with a scion of the Rothschilds. Though jointly owned/managed by Ealing and Hounslow boroughs the upkeep required on such diverse elements as the Japanese water garden and 18th century bathhouse means things are a little less polished than when you can charge an entrance fee, as the National Trust would.

The Popes Lane route into Acton wriggles quite a bit and the traffic slowed noticeably but not absolutely, and we were just catching the tale-end of the after-school passengers. This was not an in-depth visit to Acton but time enough to see that only the façade of the Town Hall remained with a deep and empty building site behind, where new facilities are due to rise in due course.  Though I have trawled several websites I have yet to find an ‘artist’s impression’ of what the rebuild might look like. More passengers boarded at Acton than at any point so far and we turned further south-east through the very desirable Bedford Park area which likes to present itself as the first ‘garden suburb’, though built in various phases the red-brick and uniform height of the homes, some houses, some mansions does give it cohesion and doubtless there are very strict planning regulations in place to preserve the character of the area. 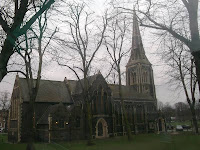 The E3 then comes out very neatly by Turnham Green station and the Green itself; I was really pleased to be on a double decker to be able to photograph the Giles Gilbert Scott church (St Michael’s) at Turnham Green, but clearly it was already too gloomy. Jo spotted the 27 bus which terminates here and said she could ride all the way home, a sign I think that we were slowly freezing to our seats.  The bus dallied awhile, possibly for a change of driver and gave us time to look down into the side roads, where we spotted a memorial building marked 1914-8, which turns out to be an ex-Servicemen’s Club, now a more open venue and also listed. 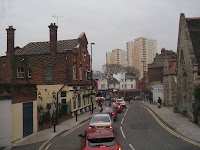 Once we had crossed over the A4 (pedestrians need to use an underpass) the bus began to slow noticeably and we soon saw the reason why; he had caught the one in front which was now very visible. The river side of the busy main road is clearly Chiswick and there follow a series of quite significant landmarks. Central to these is the access to Chiswick House which was built mainly as a summer party venue for the then in-crowd, so has no real substance as a home (decorative but not practical) but has lovely gardens, views and the house is a treat from the outside. The local authority maintains the gardens. The nearby avenues are named for Lord Burlington who was credited with commissioning this Palladian Villa and its grand landscaped garden. 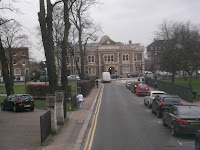 Closer still to the river there are more playing fields, allotments and access to Duke’s Meadows before the bus crosses its final main road to finish along Edensor Gardens and Chiswick’s swimming pool.  I suggested to Jo that it would only be a short stroll down to very scenic bit of the River Thames but she gave me a freezing glance that meant we crossed the road and boarded the first of the two other parked-up E3s in place, just to get back to Chiswick Station. The station is countrified to the point of there being no barriers – if we had been quicker we could have leapt off the bus straight onto the Waterloo bound train, as it was we waited in the Arctic blasts for another 20 minutes – no waiting room you see. Still till frigor mortis set in it had been a good trip round the quieter corners of West London. 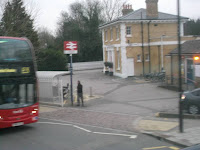