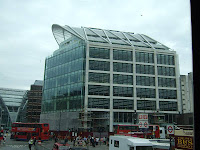 We found ourselves boarding this rather nifty and handy route as a default option when unable to progress beyond Victoria on our planned route 24 (see about 4 years earlier!).  It was 11AM, there were four of us and London was about as full of tourists as it could be. 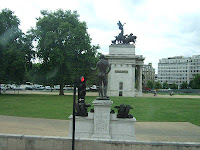 We started off north via Grosvenor Gardens, just about spotting a blue plaque for FE Smith, Earl of Birkenhead (Lawyer & Statesman 1872-1930 – also leader of the British team in the Chariots of Fire Olympics, impersonated on the silver screen by Nigel Davenport) away to the left. As always we peer over the wall of Buckingham Palace Gardens in the hope of spotting something or someone but too much greenery prevails.

Tim noted the the Iron Trades Building (obviously refurbished since we passed this way) before we circled the Wellington Arch, and its war memorials, and for once headed down Piccadilly, but only as far as Stratton Street, where the bus with some difficulty took a left turn – it was during this bit of the journey that we had to admire the skill of the driver negotiating his double-decker through some quite narrow (and expensive) streets, and you can fully understand that this has historically been a single-decker route. 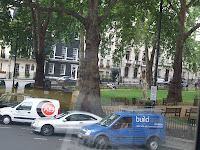 Taking this option meant we passed the Mayfair Hotel, where a blue plaque informed us that Bert Ambrose and his band had played, then round into Berkeley Square, home of more luminaries such as George Canning and Clive of India, and more recently Norman Hartnell,  designer of the Queen’s frocks, and those of several other well known women of the time. 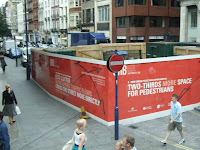 Intriguingly the bus manages to penetrate both Conduit Street and Saville Row, where you can still get a mean whistle and flute for your wedding.  Past the police station, the route emerges into Regent Street and straight across the mess that was today Oxford Circus to Lower Regent Street and the BBC. All Souls Langham Place always looks good, with the BBC expanding (expansion complete 4 years later) behind it: ‘Nation Shall Speak Peace Unto Nation’ and the roof top site of an an impromptu U2 concert. 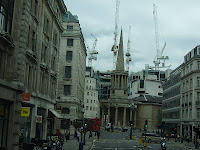 Portland Place is rich in both statues and MORE blue plaques to Quintin Hogg and Sikorski and Thomas Gage (the British Commander who lost the Battle of Bunker Hill, not the one who introduced the greengage plum) and Frances Hodgson Burnett, the children’s author who gave us Little Lord Fauntleroy, but more significantly The Secret Garden.

Out past Great Portland Street station and the International Students’ House on the corner just before crossing the Euston Road and continuing, at some speed it should be said, up Albany Street, where we passed the pub, ‘The Queen’s Head and Artichoke’ (are they interchangeable?) and yet more blue plaques, this time to Henry Mayhew 1812-1887 (Founder of Punch and author of London Labour and the London Poor), Constant Lambert and W W Jacobs – an author none of us had heard of (though ‘63 Regular’ recognised him as the author of the horror story The Monkey’s Paw – Poor/Paw, do we have a theme going here?) who died in 1943. This was the place to get off for the Zoo, and lots of passengers did.  Albany Street also has Markson Pianos (as endorsed by Arsene Wenger no less) if you fancy a little Bach. 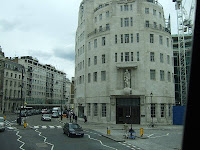 Parkway, which takes us to Camden Town tube station, has a range of eateries, often changing ones but two fairly solid pubs, namely The Spread Eagle and the presumably spurious ‘Earl of Camden’.  We left Camden Town for another day and headed up the Kentish Town Road crossing both the Camden Lock and a building calling itself Todd-AO which is in fact a small production company trading somewhat misleadingly?. Old Dairy Mews indicated what once used to be but now is an area criss-crossed by railways, and a huge UPS Depot at Kentish Town.  Fonte dei Marmi  has GLASS baths, besides which the name caught my eye as we used to holiday in an Italian resort called Forte dei Marmi, exchanging the fountains for the forts. 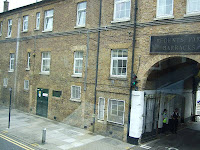 Highgate Road took us slightly uphill past some of Camden’s best schools: Parliament Hill, William Ellis and La Sainte Union, all still familiar from my school days, especially the middle one.

It took us just under an hour and we were able to use the toilets in Parliament Hill Fields  (poetry alert in the link not the toilets obviously) as we crossed over and out of Hampstead Heath, still in trust to the City of London corporation. 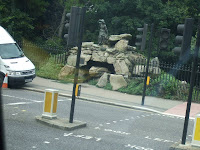 All this fun, and possibly the record for Blue Plaques (10), in under an hour!

PS> Much has changed since we took this trip Oxford Circus and the BBC have finished their building works and others have started.