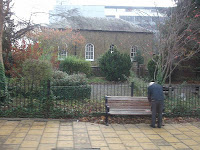 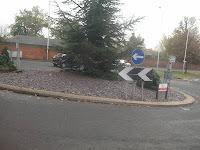 We had quite a comprehensive tour of Uxbridge, having arrived there on the stately double-decker 427. We had an even better tour of the indoor shopping precinct of the Pavilions in our search for the remotely located but very acceptable facilities and then found the start of the A10 route very easily. So easily in fact that we did not have time to eat any peppermints before boarding.

The A10 gets out of Uxbridge pretty swiftly via a series of differently sized roundabouts. I digress here as I had heard a radio item about the Roundabout Appreciation Society, whose small number of members photograph and visit the UK’s roundabouts. This makes our project of weekly bus trips seem puny in comparison as there must be far more roundabouts than bus routes. As the start of the A10 was not altogether absorbing we thought you might like a variety of roundabouts photographs, especially one with a grand Christmas tree which looked all ready and waiting for the lights, and one later on neatly planted up with winter-flowering pansies. 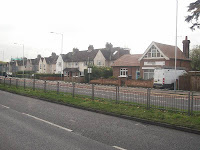 Much of the property to our left was either fenced off or being demolished, having formerly been the historic RAF Uxbridge – a large site vacated in 2010 and due for redevelopment with the first homes on St Andrew’s Park apparently to be available by Spring 2013. .

In spite of major site demolition the Battle of Britain Bunker , from which air operations were managed, is retained as a museum open to the public. Just after this point of interest (to some) comes Hillingdon cemetery and then St.John's Church, which has a lengthy history, including a Giles Gilbert Scott rebuild, when the architect was starting off on his career. 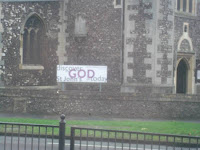 From here, the A10 diverges from the 427 and heads down the Harlington Road  - much narrower and more winding than the straight and doubled up Uxbridge Road. From travelling along a major highway we suddenly dropped speed to pass the residential area that lies between Uxbridge and Hillingdon – at this point composed mainly of bungalows and other detached properties. Some had opted for dry weather planting, others for more off-street hard standing, never a pretty sight.

By the time we arrived at Merriman’s Corner the passengers that had boarded with their luggage had all gone home and there were just three of us left.  The bus skirts an open space called Botwell Common, which from its name you might think had been around for years. Though indeed common land to 1814 it was then enclosed and has since quite a varied history featuring two gravel pits, the Shackle family and their brick works, military radar testing later taken over by Thorn-EMI, and some residual agriculture... 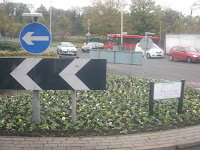 The bus nips pretty smartly at this stage and there were few stops, and little of note – unless you count a rather large scrap yard – until we suddenly found ourselves passing through the security barrier that encloses Stockley Park. This was in fact our second visit and like the last time there were few people to be seen and no one joining the bus. In fact there were more Canada Geese, that scourge of open grass (2-4 lbs of excrement per day), than people to be seen. 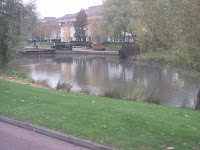 The landscaping is very pleasant and there are frequent water features – hence the nuisances who some deem worthy of ASBOs. Some of the companies enjoying their working environment round here were familiar, Canon and Apple for example, though we had no idea what Aspect might be. Something international and IT is the answer. The reason so many of these successful major multi-nationals are located here must be for the proximity to Heathrow airport and the ability to go to firm HQs overseas very easily. 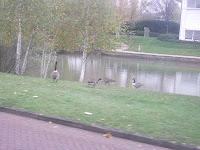 After leaving rather scenic Stockley Park the bus barely stops at all – this is mainly because it dives down the small spur of the M4 which gives it access to the Northern Perimeter of Heathrow Airport and thus through the tunnel under the runways and smoothly into the Heathrow Bus Station. What was extraordinary about this trip, certainly not our first to Heathrow and with all the U buses to come not our last either, was that today we did not see a single airplane in the sky. However the minute we stepped out there was that familiar smell of aircraft fuel so we knew this was not a hoax or a film set. 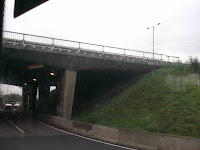 The trip had taken the 25 minutes it promised and given that Uxbridge is on the ‘other bit ‘ of the Piccadilly line it is probably useful for anyone living in or near Uxbridge who wants a peaceful 25 minute commute to their Heathrow based job. 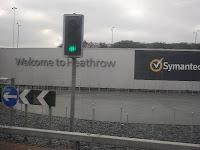