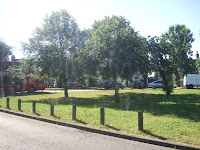 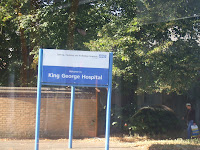 Linda was on holiday, so it was Mary and I who boarded the 387 at Little Heath at 10.50, destination Barking Creekmouth.  We headed into the King George Hospital and then out again.  It was a double decker and we had, of course, headed upstairs, so we did not notice if many hospital patients and visitors boarded.  The route goes along Barley Lane and we noted signs saying 'Warning:  Obey Parking Restrictions, these are enforced'.  Mary's guess was that, parking in hospitals being so costly, residents were trying to prevent hospital users taking their spaces.  There were certainly a lot of cars parked along here, and we were the only bus for a while. 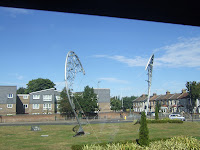 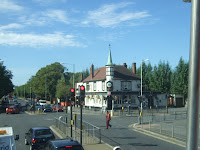 We came into Goodmayes and past the station, as well as the clock tower with bible messages at the road junction.  We also admired the tree-lined road, and the new build to be called 'Academy Central'.  Coming past the bus garage, we admired the spire of the Royal Oak pub, and Barking Park, though we were not close enough to see whether the travelling funfair was coming or going.  This brought us towards the middle of Barking, with the fish sculptures on the roundabout, reminding us that this area used to be a major fishing port (as we have  mentioned in previous posts). 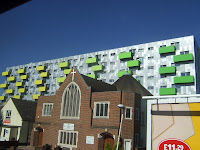 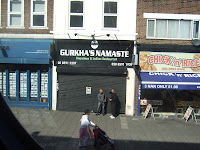 Although there are rather too many closed shops in Barking, we were pleased to see the Gurkha Namaster restaurant, and the colourful new flats as we headed out of town.  The one way system meant we couldn't really see the Broadway Theatre, and the memorial to Job Drain VC, but we knew they were there, from earlier journeys.  And we did enjoy the views of the church across the green as we headed down towards the A13. 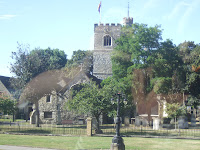 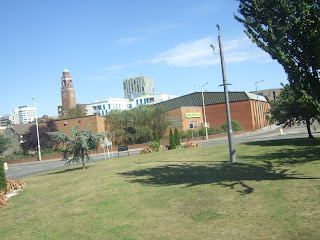 And that's where things went rather wrong, or at least slowed to a standstill.  We came to serious traffic queues, both along the A 13 and in our road called, with unintentioned irony, Movers Road.

Large lorries trying to turn right off the main road and down to the Industrial and business areas of Barking Creekmouth blocked the roads and tried to slip cross on the red.  Our driver was very calm, and managed to avoid being hit by a pushy Bunzl Healthcare van, which had already annoyed me by boasting one of those stickers that read 'cyclists, beware of passing this vehicle on the inside' but don't add 'because it has a mad driver and the wrong kind of mirrors'. 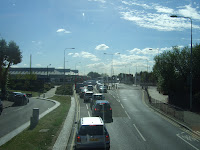 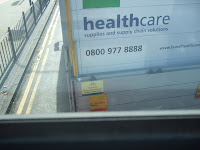 Once we were over the main road, it became clear that the delay was because of serious resurfacing work along River Road, with police diverting traffic.  Having spent about 25 minutes getting past this blockage, we came to signs that suggested it might be to do with the second phase of the East London Transit Scheme, which made us feel better, as we approve of improvements to public transport. 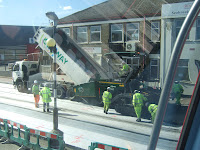 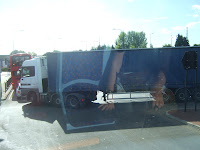 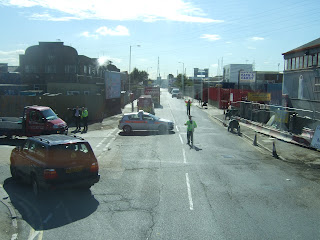 Heading towards the end of our journey, we were impressed with the amount of new housing which has been built in this formerly industrial and warehousing area.  Council banners celebrated the attractions of the new stylish homes, riverside living, new primary school and excellent transport links, which seemed to mean the 387 bus.  We hope that they will provide shops and restaurants soon. 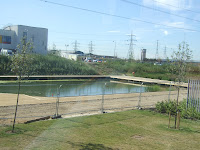 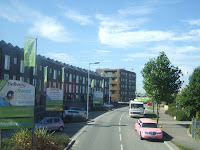 We reached the end of the route at 11.55.  When I offered the driver a card, he said that he had seen us on the TV.  Fame!  now I know how celebrities feel.  Though they probably don't usually get off the bus to be followed by the charming driver waving a dropped Freedom Pass.

We had had a sunny and entertaining journey, despite the traffic hold up, and travelled back a few stops on the same bus, with no delays going North for some reason, to reach Barking Station.