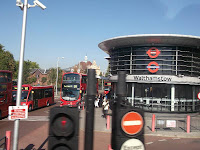 Probably this was our warmest trip of 2011 as we came out of St James’ Station, Walthamstow for a short wait in the sun for the 275; the other route from here is the super-abundant 212, which we have already ridden. The 275 tracks back along the railway line alongside the Selborne Centre (head to head Sainsbury’s and Asda stores) and round the gleaming Underground and bus stations before heading up the hill towards Wood Street and Upper Walthamstow, an area we had only really broached today. 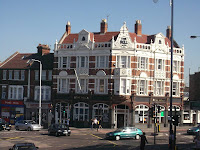 Passing the Hoe Street Working Men's Club  makes you realise how important these meeting places must have been when founded. Quite close by is the Forest YMCA both strategically placed to help support students attending the Walthamstow College which sits snugly alongside the Town Hall – built 1938-1941 of Portland Stone with a copper Clock Tower (correct time today) it is a real monument to civic pride and just looking great in the sunshine, which the students were enjoying also. 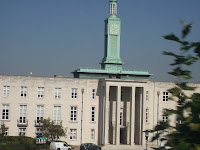 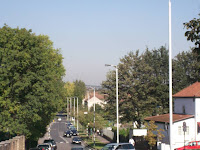 Just past the Wood Street library the 275 leaves the busier roads and heads north, for much of the route the only bus, towards Highams Park crossing the North Circular, after which the housing becomes typical streets of pleasant semis built just before the war. The road names such as Forest Glade recall this area would have once been part of Epping Forest. Similarly Woodford, through which we passed. Woodford today – and indeed for some time having once been the constituency of Sir Winston Churchill (he appears on their rather modern ‘village sign’) – has always been rather affluent due in part to the original railways having charged more on this bit of their line (the Ongar loop) while charging less round by Leytonstone. By now we had crossed over into Redbridge borough and over said railway, now of course the Central Line (which is actually showing its age in comparison to other revamped lines). 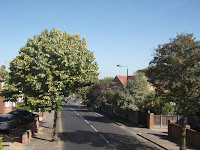 Just before we came out into Chigwell Lane we passed along Snakes Lane (a very exotic name – there cannot be many snakes worthy of mention round here can there?) where the Gas board still have a depot – no more gasholders but heaps of signs saying ‘Diversion’ (plus arrows), ‘Cycles this way’ ‘No through Road – Men at Work’: a break-in here and you could cause considerable havoc. 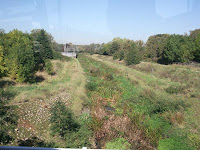 Snakes Lane took us across the Roding river valley and up the other side, with the occasional golf course but actually some undisturbed grasslands also – today we also noted how many trees were fruiting especially the crab-apples. Here are some recipes  but best ask if the apples are not yours…

There was a steady population of other passengers, including one person who seemed to be in the throes of breaking off a relationship in a mixture of tears and hardcore expletives. In the next breath she said she might do some voluntary work and I wondered how her language might go down. Sitting just behind us was a young lad who seemed very interested in the fact Jo was taking photos and we were both remarking on our surroundings – he eventually leant forward and made some helpful suggestions pointing out the ‘very rich people’ behind some golden gates (indeed another gated community). For a more orthodox history click here 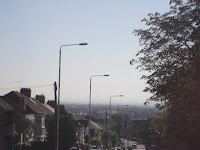 I could not believe I had missed Claybury Hospital  – one of London’s more famous and grandiose hospitals – but we did not miss it for it has been renamed. We were very taken with the views down the hill (Tomswood Hill that is) right over East London down to the Thames and also distracted by the Guide Dogs
Training School. If ever a charity ticked all the boxes this is it and they always do well in street collections, when sometimes you can pat the dogs, otherwise discouraged. 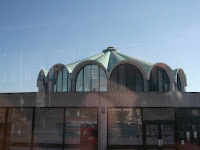 Anyway, as our travelling companion had correctly identified, this was rich people’s Essex , but by the time we descended the hill to the Fulwell Cross Roundabout we were, after a long ride in completely new territory, back somewhere more familiar. The Leisure Centre at the roundabout is always an eye catcher and we made reasonable progress along Barkingside High Street watching as the driver of the van in front leapt out and into the baker’s completely blocking the traffic – his mate slid into the driving seat and we were able to progress to the end and where the route finished at Tescos, almost certainly built on the site previously occupied by the Barnardos cottage homes.

The walk to the Barkingside station was noteworthy for its lack of facilities for pedestrians – clearly a station where partner drops spouse off at the station, or you park your car, as it was almost impossible to cross the road and access the station safely on foot. Still we made it to tell the tale.

This was at the end a novel route for us, showing that even 275 routes down the line there are whole chunks of London where we have not been before. Once it leaves familiar Walthamstow behind this is a route, which carves its way along old lanes and up and down hills – there are loads of Essex jokes and clichés and being flat is one of them but today’s route demonstrated the opposite for us. This was a most enjoyable and surprising trip in wonderful late September sunshine.

Just to give a shout out and thanks to Peter Watts at The Great Wen blog for posting the piece he published in Completely London back in October, and thus boosting our readership.  Peter and a photographer accompanied us on a trip out of Brixton (Route 355 to come) and of our occasional brushes with journalists this has been by far the most positive and genuine. The photographer was pretty good too though Peter was not able to use his pictures for his blog.
at 01:43