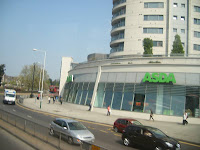 This was to be the 3rd bus of a day spent entirely in Essex. A short walk through bustling Romford centre – even not on market day it was full of families enjoying the spring sunshine during the Easter Holidays. We promised ourselves that next time we would try to get there on a different day of the week.

There was a short 10 minute wait and then the double decker 247 took us round and out of Romford in a northerly direction. We noticed that Romford now has three 'Centres' ; the Liberty, the Mercury and the Brewery.
Perhaps we need to come back after dark to sample ‘one of the most vibrant night-time economies’ as the Havering website puts it – not sure the PR guys quite thought that one through.
(Presumably this is where TOWIE spend some of their time?)

When all that partying and consumer spending gets too much for you, on the route out of Romford you can indulge in Simply Floating, which does indeed offer flotation tanks – Jo thought they were a form of torture (could she be confusing them with water-boarding?) but more likely a legal form of relaxation .

More prosaically further down North Street is the vast and quite imposing East London Bus garage. (Later on the trip we were to overhear upstairs a ‘separated’ dad on an outing with his daughter explaining that the East London buses had air conditioning whereas the Central London ones did not – we made do with some open windows. To be fair he was full of lots of popular science – how to start fires by magnifying sunlight, rotation of the planets. 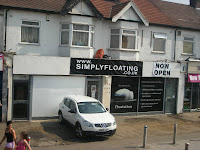 There are several bus routes along this stretch which then arrives at the rather Thirties looking Collier Row – I was bit puzzled as coal never seemed to be part of Essex’s riches but according again to Havering council’s website:
“Its name, however, still shows its links with the past, as the colliers were the charcoal burners who inhabited the area from the earliest times. They made charcoal from the many trees growing on the slopes overlooking Romford. The Romans were here before them and pottery and domestic remains have been excavated.” 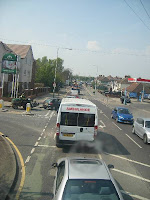 After taking a circuit of the roundabout – much beloved of Thirties developers we ran into our first slowed traffic of the day, due to some road works along Collier Row – there were many cars, also perhaps to be explained by the seeming lack of trains both underground and overground round here – this bit of semi-rural but still heavily populated inner Essex seems to be in something of a public transport vacuum so the buses are the lifeline for locals without cars. 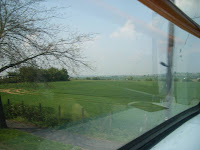 The signposts kept promising us Havering-atte-Bower, perched up on a ridge (there aren’t many hills in Essex) and with a well documented history but we shall have to wait  another 100 or so bus routes before we get delivered there. It obviously gives its name to Havering borough, which we were about to leave, briefly for Barking & Dagenham before settling down in Redbridge.
Then there we were bowling along between fields of arable land – no cows or horses this time but what might have been wheat, with  mustard yellow glints of oilseed rape up on the slopes. Needless to say the bus did not stop along here and in fact several of the bus stops looked quite overgrown with tendrils of hedges beginning to ensnare them like some metal sleeping beauties. We passed the Hainault  Forest Golf Club (I don’t imagine they come by bus this not being Scotland) and then to the right a little outbreak of industry. No, I didn’t know there were so many options on glass. 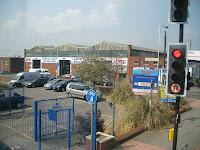 After the deserted factory sites of Fords at Dagenham earlier in the morning it was quite nice to see an active and spruce-looking industrial site even if it is in the middle of the Green belt.
Leaving rural Essex on our right we headed back into London proper via the long straight road that is the New North Road taking us through Hainault, which is built up with much interwar (see the once handsome Norman Parade 1933) 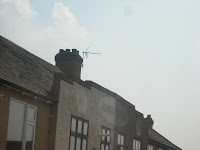 and post war developments, interspersed with the odd block of allotments. It was not that long since we had passed this way on the Route 150, so we were not surprised to see Toyology again at Fulwell Cross. Several passengers with children got off to use the Library and Swimming Pool combination at the Roundabout and the bus continues for a stretch coming to rest at Barkingside, handy for the station and Barnardo’s. 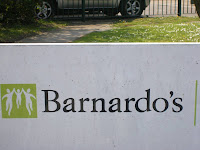 Barkingside is Barnardo’s and these maps and plans show how Dr Thomas founded a whole village community: 2 dozen or so family homes supported by educational and medical facilities and record-keeping and administrative blocks. Between the Tfl map of the area done in 2009 and the current Google view from the air significant bits of the campus have vanished and are now ripe for re-development. Meanwhile the Barnardo’s name lives on in a variety of projects designed to help the inner city children and young people that he targeted as needing help and support over 100 years ago.
Barkingside was a useful station for our journey home after the short if prosaic Route 247. 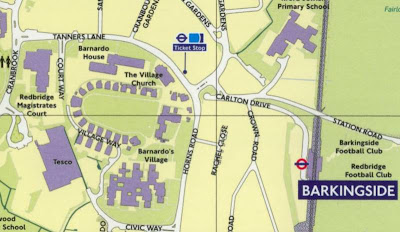