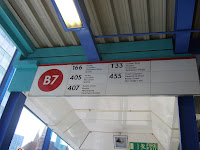 Our first journey of a long day should have begun well:  West Croydon is easy, thanks to the Overground, and Linda joined me on the train, Mary being busy with other things today. (You would not know how easy it is, however, if you were relying on the TfL Journey Planner, which persists in ignoring the latest member of the family.  When asked how to get from Camden Road to West Croydon, it offered me a journey via Clapham Junction and South West Trains, rather than a simple platform change at Highbury and Islington.  But I digress) 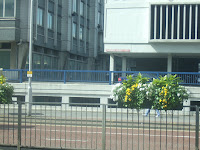 So we arrived at West Croydon's busy bus station on the dot of 10.00, to be dismayed to learn that only one in three 166 buses go to Epsom General Hospital, the official end of the route, and we had more than 40 minutes to wait. (The rest stop in Banstead, by the way) But we were not downhearted, and the proximity of Marks and Spencers enabled us to fill the time and Linda to buy a dress. 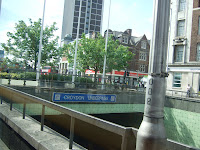 So eventually, at 10.50, we were onto our single decker, and heading along Croydon's dual carriageway, with attractive if subtle baskets of white and yellow, to reach 'The Croydon Underpass' so named, we supposed, because it dates from a time when such things were new.  We noted again how many trams traverse the centre of Croydon, before heading out to their various destinations;  it is hard to believe there are only three tram routes altogether
We turned left at the building which was once Grant's Department Store, with its offers of hats, trimmings, linens and so on it the stonework, and came to the former 'Whitgift Parade', also announcing itself on its facade. 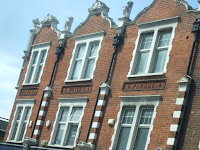 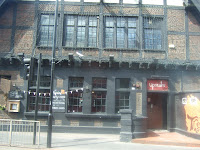 As we travelled south, we saw several pubs, including the Crown and Pepper, which is now, apparently, the Aja Lounge, and the Tree House, which is a large pseudo Tudor building with a restaurant called 'Upstairs'. 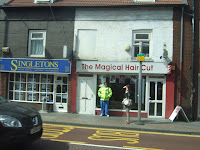 We also noted 'The Magical Haircut' coiffeurs, and the Southleigh Community, which is an organisation that provides accommodation for people with mental health problems. 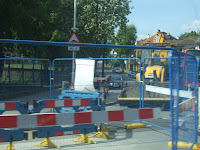 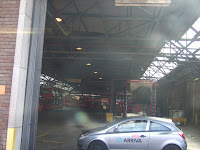 We were pleased with our steady progress until we reached the Swan and Sugar Loaf where everything ground to a halt.  There were roadworks,  with Nightingale Road closed and traffic lights to control the traffic from several directions, so  we had time to notice that at Hayling Park they were advertising a cricket match between Surrey and Essex.

We also had time to glance into South Croydon's bus garage, but this was because there was a relaxed and jovial change of drivers. It was becoming clear that the chance of us hitting the 60 minutes official journey time was pretty well zero. 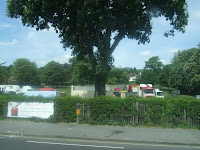 We came to one of those reminders of a changing world, when we passed the Royal Oak Centre, with gym and cafes and such, but the Royal Oak Pub, for which it was all presumably named, boarded up and gone forever. 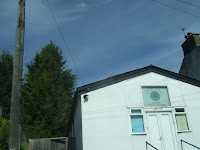 At the Rotary Field we noted the funfair, packing up to move on after the many Bank Holidays of the past weeks. 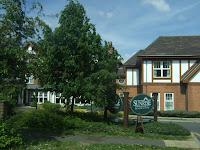 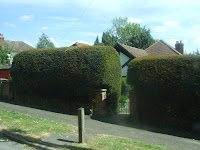 As we travelled through Purley, where many people got on and off at the large Tesco's, we came to more roadworks, but by now we were hardened to delays.   We were in a residential area, with most of the front gardens bricked over, and a number of the substantial houses given over to medical and quasi medical establishments.

Along Chipstead Valley Road, the winding, lanelike nature of the road made it quite difficult to photograph anything, though it helped to explain why this busy route was served by a single decker.  Earlier, as we sauntered down the Brighton Road, we had felt  double decker would have been fine.  But now, as we travelled up and down the hills into Woodmansterne, the good sense of the bus company became clear.  There was a fine piece of wood sculpture on the green, of which I have found a great picture but no explanation!

The Old Walcountians, whose sports ground we passed, prove to be the alumni of Wallington County Grammar School.  Soon we were back among large properties, including a care home from the Sunrise company. High hedges protected the homes from the busy road, and there was a feeling of countryside, with Huntersfield Farm and Livery Stables, and several nurseries. 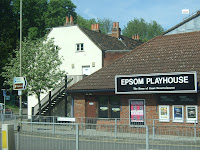 Eventually, we reached the Borough of Epsom and Ewell, and passed the former Cottage Hospital and the University for the Creative Arts, which includes the Royal College of Needlework, and so has a link with the recent royal wedding dress.

Our route to the hospital took us through Epsom town centre, and past the small Playhouse, before heading out of town along the Dorking Road to arrive at Epsom General Hospital at 12.10.
at 03:21