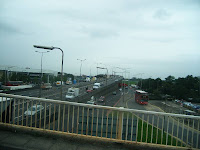 I think it’s just as well this little bus was not the main feature of the day as it barely warrants star billing though as a way to get back onto the Central Line from Brent Cross it was efficient enough.

The first challenge faced by most routes leaving Brent Cross is actually to leave, because more likely than not you will just sit in a queue waiting to get across the North Circular and onto the Staples Corner series of roundabouts, currently nearing the end of a 12-week road repair programme, which reduces the lanes 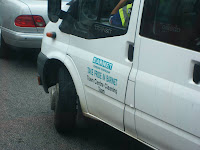 Appropriately enough Staples stationery (today perhaps stationary?) supplies now hold the corner but the original factory here was for Staples mattresses, which used to be the UK standard issue mattress before the days of IKEA (see later), World of Beds etc.
The range of shops on the opposite side of the North Circular has expanded considerably and includes some tempting resources like Borders (there is NO bookshop anywhere inside Brent Cross) and Lakeland but on the whole if you want to access them you are probably better off walking – fumes and all. The bus actually picks up quite a few pupils from outside Next (as Jo said it must be hard not to lose your pupils to commerce in the lunch hour round here) from the nearby Whitefield school. The Barnet dustcart was beating a hasty retreat also. 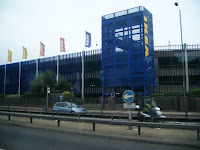 Once past the interchange the bus picks up speed, nevertheless stopping in little bays for its passengers. It was a weird experience travelling along here rather like white water rafting through a canyon – the steep concrete support of the flyover on one side and the vast metal slabs of the huge wholesale units that characterize this stretch of North West London on the other completely dwarf most of the local traffic, especially when in a small bus. No photos then until we emerged out of the narrows by Ikea. Still having such huge stores on both sides of the road must be preferable to the ‘blighted’ housing we had spotted on an earlier route (the 102) where the roar of traffic must have shaken the older homes to bits.

Ironically, although I can see the outline of Wembley from hilly south London, the weather today was so grey by now that it just faded into obscurity though we were as close as anything.

The bus itself, never empty was really filling up as it cuts a swathe along Western Avenue leaving Park Royal on the right – this was not a bus to service all the small businesses to be found on the extensive trading estate but rather the few brave pedestrians who made it to the bus stops along the continuation of the North Circular. Jo had been over sensitised to sofa shopping having spent the weekend helping Tim to buy a lifetime’s supply of sofas so of course spotted the World of Leather also along here. 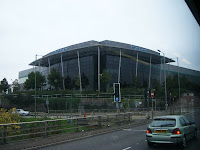 The whole bus became aware as I leapt across the aisle to photograph D-Link – Jo had to restrain me from launching a missile, verbal or other – as only last week we had bought a router to serve the newly acquired lap-top and it does not work very enthusiastically. Wi-fi in our house means sitting in adjacent rooms or occasionally in the same room.

We assume most of the passengers  must have been working in the large outlets along here – the Hoo Hing Chinese Emporium is quite striking, as is the Bestway Building, which sublets offices. Developers seemed to forget whereas once we all needed acres of office space for our filing and filing cabinets; now all we need is a laptop, if they weren't such a sore subject. 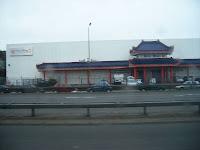 This driver took the Hanger Lane gyratory with a rare confidence and we hardly paused so swiftly did we get onto Hanger Lane itself, where large groups of schoolgirls, probably from the Ellen Wilkinson School, joined us for the final leg of the journey into Ealing. So standing room only from here on. There were works strengthening the bridge over the District Line, but so nearly complete as not to be disruptive. Ealing Common is quite substantial and offered a welcome glimpse of green after the concrete canyons we’d passed through. Ealing was buzzing with after school shoppers. 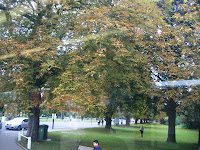 The bus does not seem to have a final focus for its end of journey, as though a daily encounter with Brent Cross interchange/the North Circular and then Hanger Lane gyratory was all it could manage before staggering to an exhausted halt near but not quite by the Mall.  It took just over 45 minutes most of which were spent trying to leave Brent Cross. Not the most enticing of trips but I can see where it might come in useful
at 15:46