Well, after the glitz and fame of the 100 (600+ hits after being kindly tweeted By Diamond Geezer – thanks) the 101 was always going to be something of an anti-climax, not helped by its rather remote location requiring serious travelling to get to either end of the route. 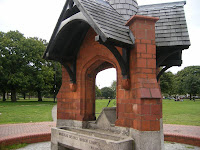 Still we (Sue and I – Jo being in Suffolk and Mary still under the weather) were agreeably surprised by Wanstead, which even on this definitely autumnal and blustery day looked green and calm after the turmoils of the Central Line. It certainly has a villagey feel, what with the trough on George Green and then walking to get the Number 101 at Woodbine Grove. 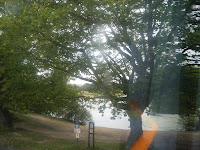 The green theme continued as we passed the Old East Hammians (why not Hamsters) Football Ground and more importantly a great expanse of Wanstead Flats – this is one of the few routes to cut right through it. A fellow passenger, who introduced herself as Jean Gosling, told us there were recent protests at proposals to build a police ‘Briefing & Mustering Centre’ on Wanstead flats to deal with any trouble during the Olympics, which in turn reminded her that back in 1993, whilst a lollipop lady, she had been suspended because of leading her ‘school children’ on a protest to save some trees on the Flats.
Clearly the locals are prepared to fight to keep their open spaces and the Flats offer sports grounds, a golf club and of course some wilder areas with three or four ponds.

Not far past the Wanstead Flats we passed a large well-maintained cemetery which Jean recommended as also offering good walks – something confirmed by the existence of the following guided tour .

This was to be about the sum total of our greenery for the day though as you shall see Beckton proved to be leafier than anticipated. But I get ahead of myself.

First comes East Ham and immediately the bus, a proper double decker, became fuller and busier. By now we are familiar enough with East Ham to know that going south towards the River the bus takes a back route round behind the High Street and that was the way for us today. It passes through Ron Leighton Way, which we guessed must be a local footballer (you are very much in West Ham territory): however, my research indicates that he was in fact the local (old) Labour MP for Newham who died in 1994. In case you are interested, although there have been some boundary changes the local MP remains Labour and is currently Stephen Timms. 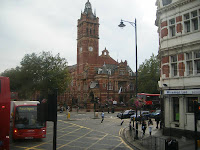 The bus ploughs its steady furrow south, passing the civic offices of East Ham – Town Hall and Library from the 19th century and the more modern Newham College opposite.

Today was very obviously the first day of term. The bus seemed abuzz with students of all ages who had been into their various places of education and were sharing timetables with their friends either directly or by phone, and each primary school we passed had a clutch of anxious ‘new mums’ outside.

Then once we had crossed over the busy A13 we were entering Beckton or Beckton Alps as the signposts promised us. 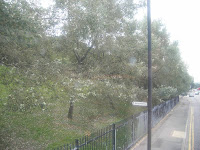 There is a mound/hill but we South Londoners are used to something more substantial and, dare I say it, less smelly.
Now our very old A-Z (I mean published in the 1980s.) has Beckton as a large area of gasworks, which indeed was the case, and it is still home to the largest sewage works in the country, the destination of London’s Victorian sewerage system and unfortunately the source of the smell just mentioned. 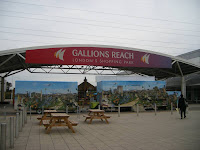 Further south are the remnants of three huge docks, which closed in 1981, and the river is really not that far away but unfortunately not really visible today. From the 1980s onwards the area has been developed and that was clearly what the 101 now serves – several estates of small houses in little closes, well planted with now mature trees, and then clusters round the several DLR stations hereabouts. The locals do of course need bus routes to take them shopping and the 101 is one such route as it approaches its terminus. The bus negotiates a few roundabouts and loops past the Beckton depot where cluster all the bright red DLR rolling stock, known in our family as Lego trains as that is what they look like – cheerful on a gloomy day, mind you. And then you are at the Gallions* Reach Shopping Centre. It’s in fact a huge car park surrounded on three sides by the usual high street suspects but seemingly housed in industrial type units. We took a comfort break and Sue even tried on a cosy looking leopard skin coat, which she promised not to wear with her leopard skin leggings. The shops were well stocked but strangely empty, so we rejoined the bus queues as this was ‘the only way out of here. ‘ 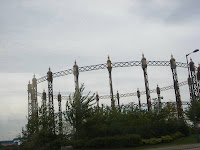 Old & very new, green and not so green was the 101.
* If like me you assumed the “Gallions” was about old sailing ships getting up the Thames, think again – it’s named after the Galyons family, which might explain the lack of sailing motifs round the shopping centre!
at 15:27