Mary & I had arrived at the starting point of the Number 84 route after three false starts on leaving St Alban’s Station where we had arrived swiftly courtesy of a small payment and First Capital Connect trains – that is we thought it was the starting point just round the corner from the station and only realised once aboard a small and boneshakingly old bus, and by asking another passenger, that we should have walked the other way. It just shows what happens when the tour leader abandons us to follow the Tour de France and inept deputies step in. However as Mary was already trying to make her strained back (over-achieving on the allotment?) comfortable, we thought for once we would do nearly the entire route – our first deviation in 84 routes – how standards can slip.

Effectively we saw little of St Alban’s, which is a City in its own right, and headed out of town generally, we were advised towards London Colney. Not only was this bus a bit rickety, but also its doors whistled each time they opened and of course it did not have the luxury of automatic bus stop announcements, but it made up for it with friendly passengers

London Colney looked very much as though it had been built post World war II to house families who had lost their homes in central London, and was now several generations on. In amongst the newer housing stock were several older and prettier buildings including both a ‘Red Lion’ still very much open, and a ‘White Lion’ closed down. Just when we thought we were into the old village and over a little river – the Colne rises in North Mimms and runs to Staines, and is apparently beloved of fishermen – suddenly in the middle of all this rural activity there was a huge Sainsbury’s previously Savacentre, then across the heath to the Willows Farm
Village and Farm Shop.

Just further along a sign indicated the De Havilland Museum so clearly lots to do for the upcoming school holidays round this way. 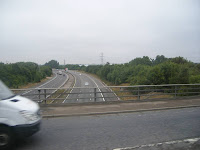 The bus was rattling along at a fair old speed as once we had delivered the St Albans passengers to London Colney the 84 hardly stopped at all, and then came the most surprising bit of the trip – on our right fields of barley (gold) [Sting alert!], well, something ripening, I’m only a townie – and on our left the M25 busy as usual whereas we had our road to ourselves. The country theme continued with the rather lovely ‘White Hart’ pub and a distinctly piggy smell, which penetrated the bus. So too the street names we could catch were Mutton Lane and later Cherry Tree Lane as we whizzed through some hidden hollows round about South Mimms – little do you know what lurks as you drive up the M1 or round the M25.

Our first set of traffic lights for a while greeted us at the commencement of Potters Bar so we spared several thoughts for the people whose lives had been lost in the 2002 rail crash and wondered how the enquiry was going. Interestingly the enquiry does not appear to have its own website so thought the Health and Safety Laboratory one would give a less sensational account. 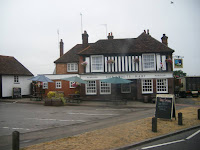 Potters Bar seemed quite extensive – I think the 84 pretty much does a total tour in order to access the station and then heads south, pausing to change drivers as we cross back into the London zones and safely back inside the M25. This is the way towards Hadley Green of which we had never heard but were impressed to find a village so close to both London and the M25 retaining quite such a small scale feel 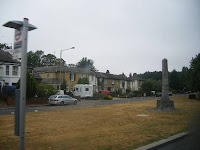 Although this photo looks like our usual attempt to capture the local war memorial this image in fact is a much older monument with a more unique history – namely the Battle of Barnet.

Chipping Barnet merges into High Barnet and the focal points of the High Street – the very fine church and the Spires shopping centre named after it. I was just explaining to Mary how we had received a helpful comment on the 34 blog about how high the Barnet Church is when a fellow passenger, disembarking with us at New Barnet, told us it was 326 feet above sea level (not surprising as our views had been extensive even from a small bus) He added that his dad, who had been unable to serve in the forces during World War II as he had a weak chest from being a stoker had been on fire watch, which he used to carry out from the top of the Spire – which apparently you can still climb up at weekends.

The church apparently founded in the 13th century was rebuilt in 1560 but I think the current version is a Butterfield special from his gothic revival phase though I am happy to stand corrected. Lots of historical details here for the keen. It is the site of an ancient horse fair, whence comes the rhyming slang of Barnet Fair or barnet for 'hair'. 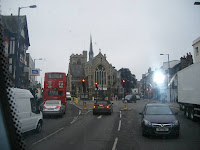 It was downhill from here – in all senses. We passed High Barnet Station – having grown up on the Edgware branch of the Northern Line, taking the right had fork feels like being unfaithful so I tend to leave it well alone – and thence into New Barnet (confused? Yes so were we) and the end of the route.

A doubting relative had not believed a red London bus would take us to St Alban’s but here was the proof and very enjoyable and certainly memorable the trip we had aboard it. 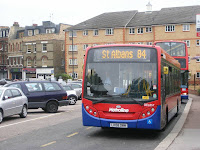 PS We were clearly not the only doubters as just short of New Barnet a very cheerful Inspector boarded to verify our passes and hailed our driver as ‘Easy Tiger’ which is not quite how I would describe the careful chauffeur who had brought us safely through rural Herts back to London.
at 15:21