The Number B11 Route

Monday18 February 2013
Here we are starting on the B buses, there having been only one A bus.  We have not skipped ten of them:  as far as TfL is concerned, the B 11 is the first one, running every 15 minutes from the Town Centre of Thamesmead to the bus garage at Bexleyheath.  So we were off at 09.50. This will impress anyone who has been to Thamesmead, as the public transport to get there is fairly limited.

So off we set, past the modern church, and Hawksmoor School which has the motto ‘Flying High at Hawksmoor’, clearly referencing the bird part of its name rather than the architect  though  he does have several churches in the borough of Greenwich, if not in Thamesmead. 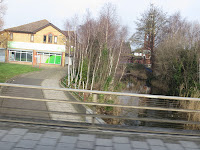 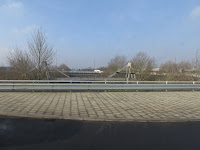 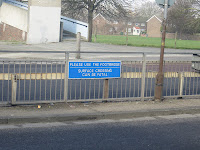 Turning right onto Carlyle Road (as Linda said, you could teach the new British-is-best History Curriculum from road names in Thamesmead) we came to the roundabout with the pedestrian suspension bridge slung within it, and headed along the dual carriageway with its terrifying warning signs.  The public housing blocks and pedestrian bridges along here have attractive murals, and the blocks at Parkview are undergoing refurbishment.  By now the bus was getting quite busy, as we went right along Sedgemere Avenue into the older part of Thamesmead, with the road twisting like a village lane.

Coming out onto the main road again, we passed a sign saying ‘we buy unwanted bicycles for £5.00’, which sounded to us ominously like an invitation to theft. 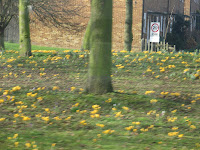 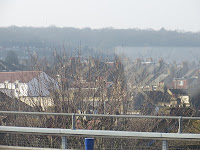 We arrived at Abbeywood Station, and went on past lovely yellow crocuses on a roundabout, to turn into more residential areas, and then up through Lesnes Abbey’s woodland to turn into the Woolwich Road and the start of a ‘hail and ride’ section. This meant the borough of Greenwich was on our right and the borough of Bexley on our left.  Turning left along Brampton Road took us decisively away from Greenwich.  Time to ponder about the contrast between the touristy bits that everyone knows, and the vast areas of less-well-known and less prosperous Greenwich we had been in this morning.

Heading up Lodge Hill, we passed the Goldie Leigh branch of Oxleas Hospital.  It is now a base for adults with learning difficulties, but Linda remembers it as a residential site for children with profound learning difficulties, and it started life as a hospital specialising in radiotherapy for children with ringworm (honestly, I am not making this up.  The link to large numbers of scalp cancers took some time to be established). 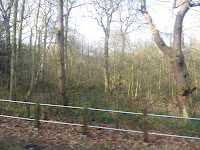 Back down the hill and past the welcoming Bexley Borough sign, the houses almost all had hardened front gardens, as well as designated parking spaces on the pavement outside their property.  The end of the hail and ride section left the bus so full that about ten people were standing.  We did pass one parade of shops, including a co-op supermarket and pharmacy, but on the whole it was residential, a long area of bungalows, including one which, we thought, might need to do some serious pruning this year. 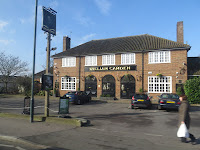 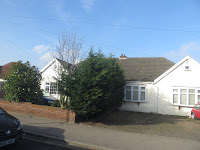 As we came past Bexleyheath Station, well away from the town centre, we were pleased to see both a ‘proper’ butcher and a baker as well as the William Camden Pub.  You might think a sixteenth century historian and school teacher an odd choice of name, but he is credited with inventing the phrase about early birds and worms, so he must have had a lighter side. 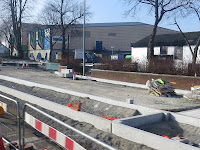 The Crook Log Roundabout told us that we were nearing the end of our journey, and we turned into Bexleyheath itself. Warning signs told us that the bus was to be on diversion, and after The Wrong ‘Un pub we went round the south side of the shopping area, because of road works.  (you will recall that the Pub could equally be called The Googly)  As far as we could see, these works were to reallocate the space, giving more pedestrian and less motorised vehicle space.  Many people got off to walk through to the shops, though in fact we did a number of left turns which took us past the large Sainsbury’s and the enormous police station to reach the Clock Tower after all.  Here the last of our fellow passengers got off. 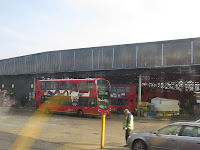 We, on the other hand, stayed on and passed the Jolly Millers Pub to reach Bexleyheath bus garage. where this route terminates.  Our driver was a bit taken aback to find us till on board, since all the other passengers had got off at the shops.  We arrived at 10.35, having had a pleasant trip, and with only a short wait to pick up our next bus.