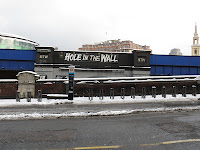 Today Linda and I polished off two brief central London buses which ply between main railway stations, though they are mostly full of people getting out before the end.  The 507 leaves Waterloo, bound for Victoria, from the bus stops in Cab Road, alongside the handsome corner entrance of Waterloo Station.  There were about thirty people waiting to get on, not our customary experience at the head stops of buses so far.  We were on board at 10.50, passing close to the sad, disused former Eurostar terminus, for which no-one has yet found a use.  Actually, it seems that this may be about to change, according to this website. 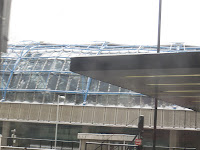 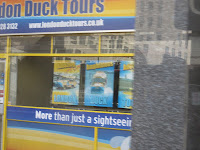 We turned left along York Road,  and passed the HQ of the Duck Tours:  not an activity for this cold and overcast day, we thought, before coming to the roundabout hotel, which we noticed is called the Park Plaza, though which Park, and which Plaza, we know not, and of course this is the name of the chain, not the specific hotel.

As we turned onto Lambeth Palace Road, the bus stop was named for St Thomas' Hospital, and a number of hospital staff got off. (how do we know?  well, many of them already had their badges on, which might be thought to be against the infection control regulations)  We noted the signs for the Evelina Children's Hospital, now part of the same complex having moved from London Bridge, perhaps to make room for the Shard. 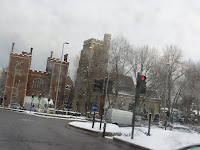 We had good views of Lambeth Palace, its grounds looking wintery and attractive.  I suppose the head of the Anglican Church is entitled to a palace and parkland in central London, though the head of the whole religion did have something to say about not having anywhere to lay his head, according to Matthew Ch 8 v 20. 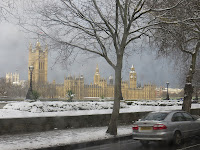 Now we headed along the river, with parliament opposite, and the turned at the pineapples that guard its approach, to get onto Lambeth Bridge.  Some say that the Pineapples are a tribute to John Tradescant, who grew the first one in Britain, and certainly we were very near the garden museum 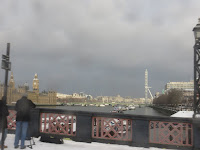 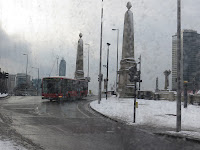 where one can learn a lot about him. Then we were onto the bridge, and over into Westminster, heading straight along Horseferry Road.  This meant we passed Marsham Street, home of the Home Office and the Prison Services HQ, though of course also the site of Anson. This was the purpose built, bomb proof shelter to which Churchill refused to move, preferring the convenience of the War Rooms under the then Home Office in Whitehall.  So there is a certain symmetry in the history of the place.

Horseferry Road took us past the White Horse and Bower Pub, and we pictured a horse peeking out from a flowery enclave, before passing Channel 4's headquarters, still embellished with a model of the Snowman and his dog. 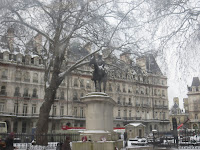 Then we took a right and left, with a brief glimpse of Westminster Cathedral, to get into Victoria Street.  There is a lot of building work going on along here, and as we approached Victoria Station, we could see the evidence of the huge refurbishment and upgrading that is going on here.  We said hello to Field Marshal Foch, not for the first time, before terminating our journey at 11.05

The weather certainly speeded things up: I have never before gone along Victoria Street so quickly, except on a bicycle.  Clearly many people have stayed home today, whether because of their children's schools or their own journeys, we could not tell.  But it was fun to be back in the middle of London one more time.