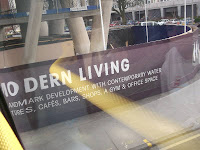 Handy toilets, a lovely spring day and soothing music in West Croydon Bus Station made the short (4 x hour) wait for the 412 very bearable, and we were even more pleased to find we were boarding a double-decker.  However once aboard our pleasure was somewhat muted on discovering this was a really old and therefore shabby and now poorly sprung bus – believe me we felt every bump as we progressed out of the bus station and joined the series of one-way systems that characterise this bit of Croydon.

Almost immediately we ran alongside the big building site (handy for Lunar House and Home Office Registration) that is to be Saffron Square complete with water feature – as I write this we are already in drought so by the time we reach Route 412 we may be in deserts – something Croydon had clearly anticipated in the ‘dry’ planting of some of the central reservations.
(PS We all know what happened to the great drought of 2012!) 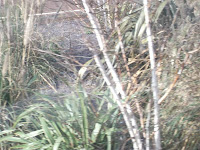 My heart sinks slightly at the thought of a 45 storey Tower as the other much older tall buildings (Nestle HQ for example) along this stretch of Wellesley Road already make it a terrific wind tunnel. Perhaps the waiting hopefuls at Lunar House – of whom there were very few today – have all been blown away.

Croydon High Street heading south means restaurants that come and go, and all nationalities are represented here. We enjoyed the joke of the Ponte Nuovo and Café del Ponte, which nestle (no pun intended) under the Flyover, though in fact the nuovo seems to refer to this branch of the restaurant, rather than the bridge. As we know from Paris and le Pont Neuf most ‘new’ bridges tend to be quite old… 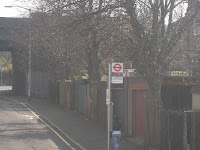 Back to South Croydon we took the left fork at what was once the ‘Swan & Sugarloaf’ which has been closed for 2 years – it is currently covered in scaffolding but I could not discover what the plans are for this site though there is evidently fear of Tescos moving in. In the old days TFL could be secure in naming the stops and destinations after pubs in the confidence that they remained unchanged but this is clearly no longer the case. 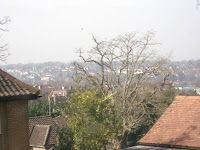 The double-decker has to do something of a loop in order to avoid a low bridge but essentially climbs a hill, taken only by this route and the 403, which at its lower end is lined by large houses, both semis and detached homes, but then passes on the right a large area of woodland criss-crossed by a series of inviting footpaths. This is  Croham Hurst, which has a long history. It looked pleasantly wooded, though I expect the more manicured adjacent golf club has the better views.

On the crest of the hill stands the Selsdon Park Hotel, not really visible through the imposing black and golden gates but again there is more golf on offer. Selsdon is also recalled in ‘Selsdon man’ or pro-free market economics kind of Tory, who met at the Hotel (and golf course) to plan and we know where they got us..  More prosaically, the next site is a large Sainsbury’s together with the Selsdon Community Centre which is where the passengers got on and off.   The centre is mainly staffed by volunteers and it is hard to believe that this hilly area of stockbroker belt belongs to the same borough as New Addington or Thornton Heath.  The 412 uses the pull-in by the store to turn round and head along a ridge in what we guessed to be Sanderstead and were proved to be right when we passed the huge All Saints Church and the adjacent Sanderstead pond. It has been difficult to find a history of the church but parts of it may be very old indeed. In spite of having a pond to its name Sanderstead is interestingly a ‘dry parish’ as the previous Lords of the Manor disapproved of the drink. 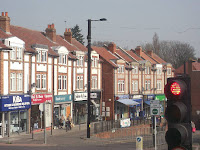 From here it was steeply downhill with misty views over towards Croydon far below in a kind of bowl below the North Downs. This is prime green belt country but it seems even land still farmed round here is being sold off.

We were beginning to feel the age of the bus (or was it our own?) as we bumped even further down the hill past Riddlesdown Station and Downs Court Road to join the rather energetic A23 just by the huge Tesco that has left the Purley Shopping Precint looking somewhat downgraded. 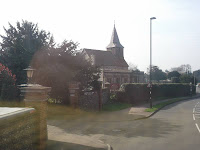 We were poised to get off somewhere near here – named variously Purley Cross or Purley Downlands Precinct, neither of which seemed very obvious: are they fanciful names for what is essentially a rather large road junction and roundabout? However there was no ‘This bus terminates here’ announcement, so we stayed on alert to the next voice over. 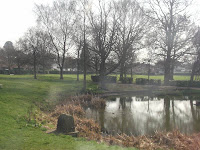 Our plan had been to disembark and take any route down the road to South Croydon but by our illicit ‘over riding,’ for that is what is was, we got there by default. We deduced our driver was not aware we were still on board as she seemed rather surprised to see us when we got downstairs and made sure we were off before she went into the rather sizeable South Croydon Garage.

We know from our visit to Brixton (see the route 355) that the public are not allowed into garages without prior permission and ‘minders’.  What we did not know was that one of our contacts from the Brixton visit recognised the card we gave the bemused 412 driver and later told us that indeed the 412s are about to be pensioned off to the country while the route inherits some hand-me-downs in the shape of former Route 19s from the afore mentioned Brixton. Of course by the time you read this all will be up and running.
** Sadly no – no new buses as yet – see PS for the Route 403. 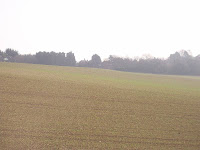 This was a 3 golf course trip (Croham, Selsdon and Purley Downs) so pleasantly green and hilly as befits an outer London route and taking 40 minutes to circle South Croydon and Purley.
(PS 63 Regular who read this snorted and said ‘you can more or less walk from West Croydon to Purley, what’s this about ?’) 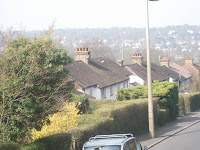 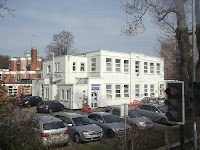 BLOG ALERT
We have ridden the next 8 routes so posts will come thick and fast.