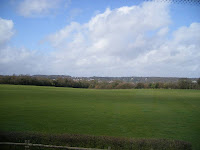 In order to get thus far we had (seamlessly and effortlessly) taken two other buses so were already as far towards the edge of London as our bus maps allow. An extensive tour of New Addington with its entirely 20th century feel spanning the garden village ideal of the Thirties to the ‘families need homes’ thrust of the Fifties and Sixties has been linked to the rest of the metropolis by the Tramlink, where we to boarded the 64 bus. The 64 ha 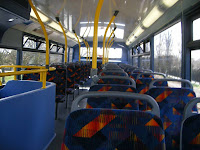 s always served Addington and we left Parkway enjoying the extensive views over the fields and can well imagine how it was still farmland 80 years ago. Perhaps because the ten-year-old trams now serve this area pretty well our bus was fairly empty for the start of this trip – it was also amazingly quiet as to engine so we felt quite lulled and soothed on our trip. It is very much the only lower digit bus to serve this part of the world – all the other numbers are well into the 300s or 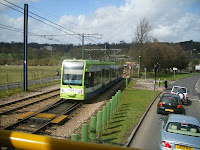 400s or even the Letters, which really do seem a long way away from 64.

Forestdale, which is the other large housing development hereabouts, occupies much of the hill down into Selsdon – it’s a wide road with the houses set well back. John Ruskin College is well established, having started life as a grammar school, but we have not yet found any evidence that the art critic who supported the Pre-Raphaelites actually lived round here.

There were signs to the London Loop and Section 4 passes this way – saying not surprisingly that the views from the Addington Hills are splendid and far-reaching. 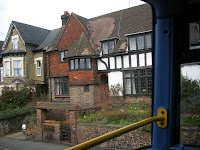 The 64 bus has quite a steep climb to get up into Selsdon and is of course a sole route hereabouts – the trams not managing the hills quite so well. Selsdon is very much the older established but still firmly 20th century bit of Croydon – large detached houses, mature trees, private schools and golf clubs and thus it continues, fairly uninterrupted with still few passengers boarding, giving us opportunity to appreciate the colour coming back into the grey – yellow forsythia and the beginnings of pink blossom –down into Croydon Town Centre, serving all three stations – first South, then East, the real hub, and finally West Croydon. 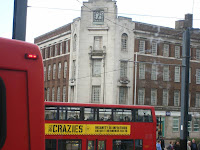 And suddenly the bus turns not from a frog into a princess but from a country bus to a town bus as all the passengers pile on at the various stops through Croydon. The older building now housing the Halifax has a public clock, still keeping good time I note, and re-adjusted for summertime but perhaps the passing bus advertising a film called the Crazies could be applied equally to the ‘Ladies Who Bus’?

Though termed West Croydon – and it’s only a few weeks since we were here on the 60 – to be pedantic it’s really North Croydon and there we were heading out through the Indian restaurants and food shops now pretty familiar to us, past Mayday Hospital and s 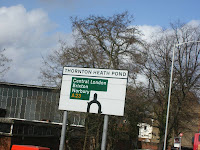 ome smaller hotels who keep up the larger houses along here. And then West or North Croydon merges into Thornton Heath and there we were at journey’s end. The head stop had given us a time estimate of 33 minutes, which seemed a bit optimistic, even for a short route but we did complete our ‘day out’ in just over 40 minutes, and the sun came out too! Just for a change thought we would celebrate this number with an audio link as this is just the sort of activity the writer was thinking of when he wrote his song. (Did you see that coming?)
at 13:08