Streatham Bus Garage to Old Coulsdon (The Tudor Rose)
Tuesday March 9th 2010
This proved to be (Yes, Brian) a bus of two halves but to start at the beginning.. We boarded at around 11.25 after a brief wait (it never seems long when you can see them sitting there ‘on their break’) and took our usual seats. The bus floor looked rather as though a football team had come off a muddy pitch and smelt faintly of beer. Not to worry: the significant number of upstairs passengers en route into Croydon were eating their chips with vinegar and KFC so things looked up. As befits a bus advertising Miss Sixty the passengers were by and large young and probably students. 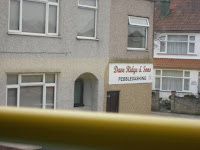 The bus immediately turned off Streatham High Road, where we said a temporary farewell to the A23, and down Greyhound Lane into what we learned to think of as Streatham Vale, or the hinterland of Thornton Heath and Mitcham. To find a b 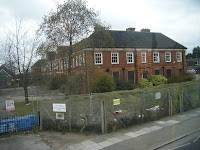 uilder advertising pebbledash seemed to sum up this part of the trip, where the homes must have been really sought after when built but currently look a little forgotten – other signs of neglect included an abandoned school and some derelict front gardens.

The route also passes a large crematorium and cemetery too, doubtless adding to the note of gloom. However there were also clear signs of regeneration with a new Harris Academy and a new 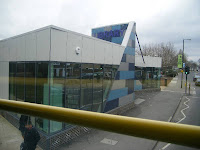 library, even if some of the play facilities come courtesy of McDonalds. This area proves to be Pollards Hill and, often being the only bus to serve the many streets round here, the Number 60 continued to pick up passengers apace before emerging back onto the main roads to approach Croydon via the Thornton Hea 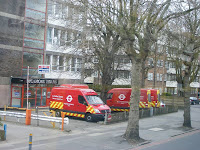 West Croydon has a strong South Indian flavour with several restaurants and outlets catering to the community: ‘Tastes of Kerala’, another Ambala which tempted us last week on the 58, and our usual hairdressers, which today included ‘Kare Cuts’ and ‘Halos’ which might have something to do with the local ‘Saints & Sinners’ pub? 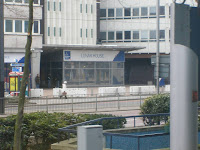 Central Croydon of course is well known for having, amongst others, the head offices of such different organisations as Nestle HQ and Lunar House, now part of the UK Border Agency, where asylum seekers have to report as soon as they can after arriving in the UK – after that it becomes a mystery as to what happens to their applications? (If I were newly arrived in the UK, I am not sure I could understand much of their website.)

Given that we passed close to the Whitgift and other shopping centres it was not surprising that all the chatty young passengers we had acquired en route got off at this point.
This route goes under the flyover, through South Croydon, where you can find the school after which the shopping centre was named, and familiar landmarks such as the ‘Swan & Sugarloaf’ a still extant pub which features on bus destinations, and has done since the days of horse-drawn trams. For once 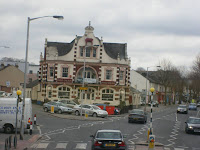 the web does give an explanation of the ‘sugarloaf’ bit, but it is fairly extensive so only anoraks need click here.
This route, which follows the commuter railway line was very familiar to the Project members having all had parents or in-laws that lived in Purley. As a niece said to me when she heard about ‘Purley’ as a small child she thought it was somewhere exotic like Bali or Hawaii so when she grew up and discovered the real place, the reality fell somewhat short. The closest Purley came to ‘exotic’ was the Orchid Ballroom (1950-1973) now sadly, after several less successful rebrandings, just another gym.
Purley, like its neighbours Sanderstead, Reedham and our ultimate destination Coulsdon, is solid suburbia into commuter belt, and no worse for that. Most of the Tudorbethan houses are in good repair, though we did see the odd casualty. Purley has its war memorial and some large old pubs. Purley, though I think not the parts we passed today is known for its privet hedges, and even on the A23 the tone is set.
At Purley, Route 60 rejoins the A23 and heads on to what is essentially the start of the North Downs. The bus had emptied considerably after Croydon, but slowly began picking up some more passengers, again young people heading to college. The folk of Coulsdon must be really relieved since the Coulsdon by-pass was completed – I can remember sitting in this narrow bottle neck on the car en route to Gatwick biting my nails as to whether we would make the check-in time, so road travellers to the airport must be pleased also.
Clearly the by-pass has given Coulsdon town centre a new lease of life and there was evidence of new pavements, and other face-lifts restoring the High Street to the locals. Just by the road junction where we moved into Surrey from the London Borough of Croydon and my rather ancient A-Z indicates Piggeries there were indeed free-range (though fenced in) hens and ducks and geese beside the bus route.

The last leg of the route heads pretty steeply up onto the hill with several footpaths offering us Farthing Downs/New Hill and Happy Valley off to the side with clear opportunities for a walk.

The Number 60 must earn its keep as most of the passengers were clearly students heading to (or later from) Coulsdon College, which is just by the terminus of this bus route. It 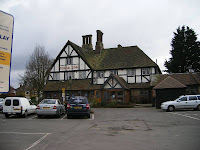 also hauls itself up a steep gradient, which I imagine was not passable in the snows.

We did not think that ‘Old Coulsdon’ looked that old as the ‘Tudor Rose’ seemed much of a period with the suburban housing, but marked a suitable stopping point. Perhaps made hungry by the smells of all the food consumed on the bus for once we treated ourselves to some warming soup from the ‘Tudor Rose’ before re-boarding this route to get us back to the nearest train station.
at 02:10