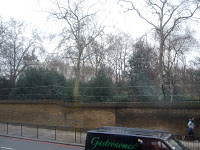 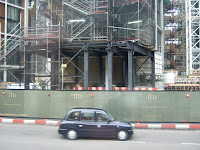 We met at Victoria, Mary. Linda and me; only I was wearing the hoody, but it was cold and miserable enough for it to be hidden beneath other layers. We were off at 10.25, up past Buckingham Palace to Hyde Park Corner, and left towards Knightsbridge. We passed the amazing One Hyde 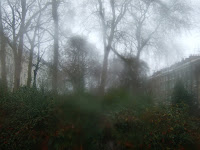 Park development, and the Paxton's Head Pub. We have linked you to the pub before, so here is some information about Joseph himself. 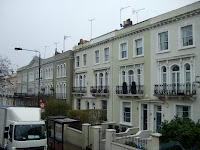 Rightish just before Harrods, to pass a lot of embassies and the Royal Albert Hall, not to mention a statue of Robert Napier on horseback, before passing what was Barkers and turning up Kensington Church Street. We must mention the Churchill Arms (never mind why) which we passed before going left right at Notting Hill to get into Kensington Park Road. 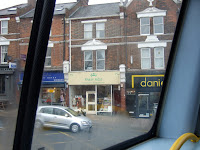 Linda thought that the Hill Nursery was where Princess Diana briefly worked, but I have been unable to verify this. Still, there were some handsome houses and misty square gardens as well as some pretty posh shops, such as 'Their Nibs'. Soon we were heading along Ladbroke Grove, past the Elgin Pub, embellished with a photograph of a horse's head from what we 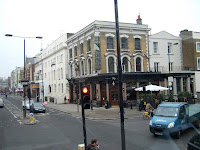 must learn to call the Parthenon Marbles. 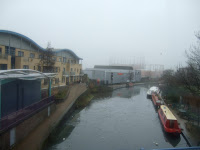 Under the Westway we saw a sign to Equal People, which looks to be a very interesting project. Then we were past 'Sylvia's Sainsbury's' and over the still frozen canal to cross the Harrow Road to get into Kilburn Lane. After Kensal Rise Station, we passed the Lexi Cinema and the New Testament Church of God before reaching the end of the route by 11.15, slightly faster than the advertised time, despite pausing once 'to regu 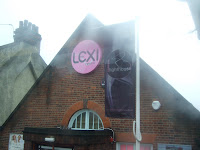