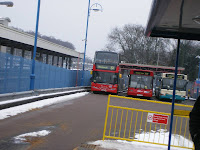 Undeterred by the freezing (though technically thawing) conditions, we boarded this bus very neatly at Orpington Station having got ourselves there via a 2 part 208 – a tale for much later. Given the temperature we also ‘hopped on a bus’ back from Perry Hall to Orpington Station. A big Tesco with green aspirations has taken over a prominent corner near the station, the development including flats in red-and-blue colours. Notwithstanding I am sure it has had its usual impact on the already existing businesses. 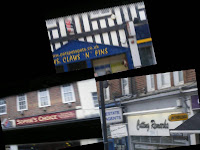 The High Street was lively with the shoppers pleased to be able to get out – there were still some Christmas offers going and a wide range of charity shops and not a few hairdressers with the usual bad-pun names. All sorts of pets are similarly catered for. We noted the war memorial, and the White Hart, which seemed a pretty little pub that must have once served this High Street when it was more of a village and less just South London spread. We spotted the near-frozen River Cray 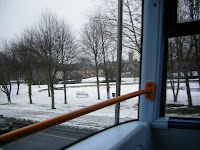 where it has its source in the Priory Gardens Ponds (it later joins the Darenth and then the Thames) as we left Orpington behind and though I thought we might be bound for a scenic country route along the Cray in fact what followed was industrial estate, light industrial estate and then retail estate!. Also a garden centre offering rock salt, so I expect they were doing good business.

The 51 bus serves St Mary Cray rather than St Paul’s Cray and is the only service along here, apart from one of the special school bus routes. . Kemnal College caught our eye and s 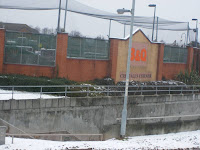 eems to be run by a Trust, which has taken over previously failing schools in Bromley, Welling and Debden. Speaking of private enterprise we then arrived at Crittalls Corner – which is now part of B&Q but has not been renamed B&Q corner – at the point where we passed under the A20 Sidcup By-Pass. The window factory, as such it is, has now moved to Essex but quite quaintly the name lives on. The route is popular and well-used – we admired someone managing to conduct two mobile phone conversations at once by switching between numbers so hopefully she gave the right road and bus instructions to the right person.

At Sidcup we crossed the London Loop which Jo has walked in her time. Sidcup has quite a long High Street, which might account for some of the shops not being used. About half way along we turned right down the hill for Sidcup Station and what looks like the older parts of Sidcup. There were some very prominent electioneering posters by the station indicating what kind of year 2010 will be, but unless we can show pictures from both main parties we will not show any. 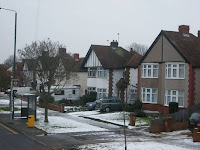 Sidcup kind of merges into Blackfen and Welling through lots of 1930s building of semis, some larger some smaller. The Oval Shopping Parade with its Tudorbethan frontage is now a conservation area. A small sign to 'The Hollies' was a reminder that this was once the site of a huge complex of children’s homes, originally Poor Law, then London County Council and from 1965-1998 Southwark run. It must have seemed a very long way from home for any but the most local children who were placed here, but presumably did offer the benefits of ‘fresh air’ for their health.

Blackfen is what it sounds like – dark wet soil prone to flooding - whence we went on down to Welling: more thirties details evident in the shopping parades as the 51 continues to wend its quite serpentine way back towards Plumstead. The bus has to cope with both hills and valleys while following what must have been old winding lanes, so not an easy route to drive, bu 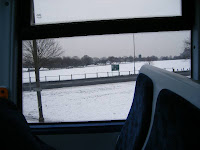 t its many residents must value it highly. Welling also boasts a Crimean War era Russian cannon (just visible in our photo) as a reminder of the links between Woolwich and Welling, which has in its time housed workers from the ‘Arsenal’. Plumstead Common is pretty extensive and the bus even crosses what looks like a ravine and is known as such locally – Slade’s ponds being part of the natural features – with the snow still on the ground it was difficult to make out details but like much of the trip this was one of the surprises for us. Where we expected more rural out beyond Orpington we had industrial and where we expected inner city we got commons and ponds.

Once again the bus veers off down hill and Plumstead has some hidden gems such as the Crescent where the graciousness of the housing still shines through the later wear and tear. On a good day you can doubtless see North of the River and all its charms but today we turned onto the very busy Plumstead Road and Beresford Street where the bus terminated, having taken the promised 55 minutes for this very unique, and firmly South East London Route.

We were determined to prove that unlike some people who only go swimming when the weather is warm that we are not just fair-weather friends of the buses but by the end we did resemble God’s frozen people.

PS. Today, unusually we had two female drivers in double deckers and our key Number 51 was beautifully driven through its twists and turns with due attention to those passengers still struggling across slush to board it safely.
at 05:54