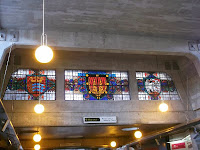 Uxbridge Bus Station (there is a garage with some emergency vehicles tucked into a corner also) is usually pretty busy with passengers waiting for the wealth of buses on offer and today was no exception with 12 of us on board the U3 right from the start. The Underground Station is Grade 2 listed but the back exit to the buses is the less decorative approach. 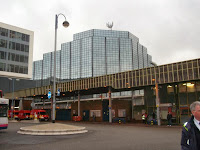 Uxbridge was formerly known as a ‘coaching stop’ – the four horse variety – which might account for the number of routes which still pass through here. Additonally, there are two rivers (the Colne and the Fraye) plus the Grand Union Canal. Nowadays several large companies seem to favour it as a location for their company HQs and there are numerous modern office blocks, mainly occupied, as you leave Uxbridge via a series of roundabouts.  Close to the Civic Suite an empty office block sported a large ‘NO TO HS2’ banner, a controversy we have already alluded to. 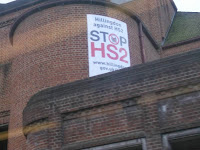 After a nifty spin down the aptly named Greenway and a couple of corners we found ourselves approaching Brunel University from the other, less grand side.  There is a red-brick building named in honour of Marie Jahoda.  I confess I knew nothing of this eminent social psychologist whose story I found interesting because of some parallels with my mother’s (Viennese birth, imprisonment for political reasons, escape to England…). Marie was born in 1907, became radicalised researching the impact of unemployment on a small rural community and so incurred the displeasure of the regime and was gaoled for a while. Leaving Austria in 1937 Marie spent the war in England, and after a spell working in the US returned to the UK in the mid Sixties and worked at Brunel setting up its social Psychology Department, hence the departmental building named for her. 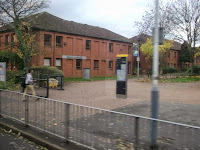 On the other side of the road there was a small water feature; as it happens the River Pinn seems to run through the middle of the campus but this was just an ornamental pond. The U3 is the only route to approach from this side.

Abandoning our students to their studies or whatever we returned to the residential streets of Cowley and Pield Heath (No that is NOT a misprint for Field).  Jo was puzzled that the area seemed to be called Cowley (are we in Oxford?) but this name seems to refer to an area closer to the canal.  Just after the historic St Lawrence Church Jo saw a sign for the Robbie Bell Bridge which does actually cross the River Pinn.  Quite who he was I have not been able to find out. 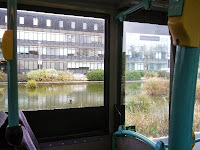 Nor am I any the wiser as to who Margaret Jo Larkin might have been to have a pedestrian crossing named for her – as it was just by the main entrance to Hillingdon Hospital maybe she was a long serving hospital employee?  Anyway, we shed and gained passengers in just about equal measure at the hospital and the U3 shadows the U1 in taking a right hand route down Violet Avenue (and all the pink and purpley roads as well). 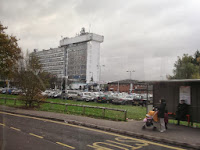 Yiewsley and West Drayton kind of blend, with the former having the canal as its focus and origin and West Drayton clinging more to the mainline railway. Yiewsley High Street is still very popular with bus users though perhaps struggling a little since the large Morrisons store arrived.  We liked ‘Hairport’ which showed good local loyalty though ‘Ladycare School of Driving’ suggested they had diverted via the pharmacy and beauty counters…

Jo also remembered  Hydrodragon from an earlier trip, mainly because their website has a real treasure trove of  pretty green objets. In quick succession we passed two boarded up building sites but while I could identify the developer information about the actual development (ie more housing) seemed lacking, perhaps indicated another stalled project.

The U3 very much on its own here takes a turn first past the pretty Green where there was a sign to the Benjamin Franklin House – here was another mystery as though the famous American inventor etc travelled variously through the UK West Drayton does not seem to figure on any itinerary?? An attempt to lure US tourists to outer West London? This route has strangely produced more questions than answers. 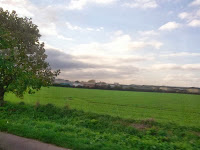 Next our bus took us along Swan Road and Wise Lane, quite rural in appearance – we guessed some farms had been sold off for more housing stock but there were still signs of animal life along here, free ranging chickens and some Gloucester Old Spot piglets.  At least the fact we saw them from a bus indicates there were not entirely indoor reared (or force farmed) as so graphically seen on last week’s ‘Borgen’.  The map shows we were very much at the borders of TFL territory with rural Bucks just over the road, hence the space to farm albeit on small scale.

We had to double back somewhat in order to turn onto the Harmondsworth Road and thus cross over the M4 just before it starts thinking about joining /crossing the M25. 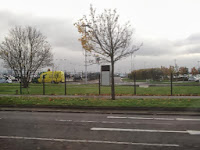 We glimpsed our last few fields before emerging onto Skyport Drive and one of those approaches to Heathrow Airport more than slightly obscured by the Perimeter fence. By now the bus was pretty empty; I had thought it might be a possible vehicle for Uxbridge folk to get to work at the airport but perhaps they prefer to do a dog leg on the Piccadilly Line?  Whatever, this was a busy local route, taking in some watery landmarks en route but finishing at one of the world’s busiest airports. Not that the Heathrow Bus station is a very auspicious first view for arrivals by air or bus. 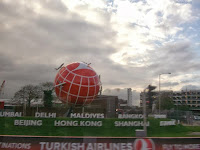