The R8 is a bus that takes passengers from Biggin Hill Post Office to Orpington Station. BUT it goes only every 70 minutes:  yes, one hour and 10 minutes… 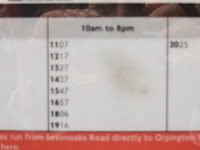 So you can imagine our pleasure when, fortuitously, our return from the end of the first bus left us with just 12 minutes to stroll to the head stop and admire the gardenful of dahlias. 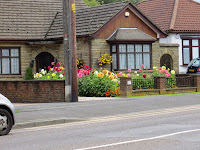 It was just Mary and I who were waiting, as Linda had been hijacked by a domestic crisis.  The bus we stepped on at 11.57 was the smallest bus we have ever been on, more a dial-a-ride than a serious PSV! 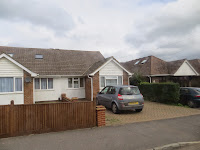 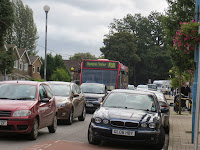 We went straight along to the Black Horse pub, and then turned sharp right into Jail Lane, passing nippily through residential property of all kinds. We wondered whether the kind of wood cladding we saw took a lot of maintenance:  maybe an annual dose of Cuprinol, we thought. 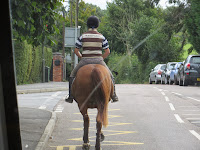 Our driver was patient with some of the village traffic. 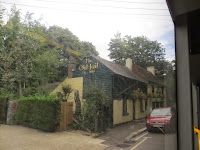 We came to the Old Jail House Pub, apparently always a pub; the name is possibly derived from the fact that prisoners under escort might have been accommodated there overnight in the 18th century.

We had passed Charles Darwin School  so we knew we were coming into Downe village where the great man lived. 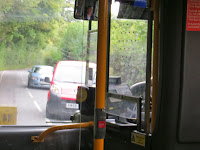 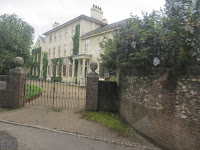 Other houses in the village were enormous, unlike the lane which was very narrow.  Our driver had on several occasions to wait while oncoming vehicles reversed to give him room to pass. 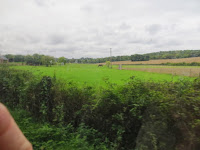 We were in countryside (as far as this suburban part of Kent has countryside) and were pleased to see some horses, as it meant we thought of Linda (who is always excited by a distant horse) 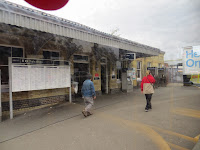 But soon we came to the roundabout at Farnborough Hill and headed down to turn along the Sevenoaks Road.  We zipped through the small parade of shops at Stanbridge to reach signs pointing to Orpington Hospital.
For the second time today (see the R2), we wriggled through Orpington, past the Walnut Centre and the  War Memorial, to head up the hill towards the railway.


We reached Orpington Station and the end of our route at 12.23.less than half an hour after we boarded this rare and entertaining bus.