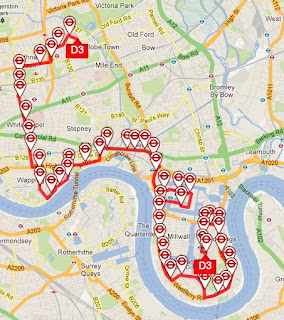 Well there we were at Crossharbour Asda, about to consult the timetable for frequency, when the next D3 bowled up. Four passengers (Jo and I plus two locals)  got on and that was about it until much later in the route towards Wapping, so our observations and mutterings went unheeded for much of this trip through the Isle of Dogs and north. This is such a tortuous route we found ourselves very disorientated to the point where Jo said ‘Have we crossed the river?’ as it appeared on the other side.

Cubitt Town  named for its developer /builder who decided the many dockworkers should be provided with suitable accommodation. There seemed to be some mellow red-brick homes set back from the main road: we failed to capture their name, but they post-date Cubitt Town being sheltered housing from 1935, pictured  here. 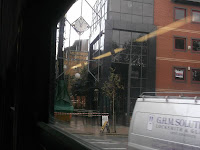 Having gone north only to go south again we rounded the whole curve that marks the watery edge of Isle of Dogs and managed to cross Marsh Wall three times in all. 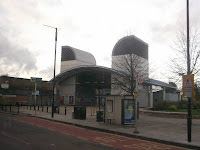 There is a mixture of public housing and private enterprise I don’t know if the Prime Meridian runs through the Isle of Dogs but here were certainly enterprises named after it. We were also pleased to remember Jack Dash, a 20th Century Union leader, who has a council office named for him . Earlier struggles are also commerorated in Dockers Tanners Lane that we passed as we came back north before entering the Canary Wharf Complex.   Also catching our attention was the skateboard park now being used by young people on scooters,  which must be less manoeuvrable? Also hereabouts Thermopylae Gate – it was a Greek naval battle but seems an awful mouthful to have as your E14 address. Sir John McDougal Gardens  were given ?planted ?paid for by a member of the flour milling family leading Jo to mutter ‘Graded Grains make finer flour’. 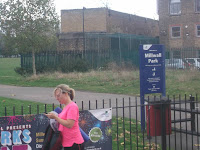 Nearby is Mudchute Farm  and the DLR station of that name (this was to be another D route which seemed keen to follow  a railway line) so soon afterwards we arrived at the rather windswept looking Island Gardens.   Island Gardens is also the other end of the  Greenwich Foot Tunnel and reminded me of cold winters where there seemed little else to do but have cooped up children run down the tunnel and then come home on the DLR. 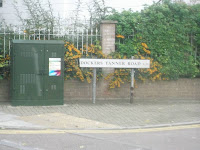 Before entering  the enclave that is the financial district we noticed a white van being stopped by the security personnel, and were pleased we were on a bus. Down to 4 passengers there were no more takers from here as all the workers seemed intent on finding lunch without straying too far. Unfortunately photos from a single decker are very limited so no tall office blocks no glimpses of waterfront cafes and a mere hint of  the planting these bankers can clearly afford. .
Talking of affordable I am not sure what will happen to the Cannon Workshops  if the proposed new building goes through. I am still mystified by WHY people anywhere are still building huge office blocks – fine and understandable when computers were huge and we still needed filing cabinets and desks but all an office needs is a few meeting and working spaces; the rest you carry with you. 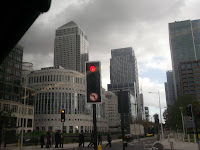 This bus route exits the financial complex via the Limehouse Cut and  cuts down to Shadwell passing Butcher Row – I have expended considerable energy trying to identify a barely seen Blue Plaque and it turns out to be for a Reverend St. John Groser who is described as priest and social reformer. I guess for any incumbent  to gain trust and respect of the local  community would have to address their issues in a forthright manner. Tea party vicars would not survive in Docklands. 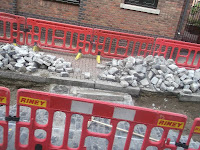 The trip through Wapping was lively mainly as we bounced over the cobbles underfoot – and we could see they were relaying them not merely replacing them The streets hereabouts are such a tangle with many of them ending in wharves (disused for the main part) and stairs to the water that it was amazing a bus could pass anyway. Less developed and landscaped than the revamped Isle of Dogs Wapping to Shadwell has the feel of a more timeless riverside London. Gullivers Wharf  - Tobacco Dock -  Wapping Wall. Each name more evocative than the previous one. 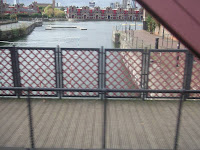 At the Wapping Health Centre the bus suddenly fills up and takes on yet more people through Shadwell . You might say the alternative name for Shadwell was St George’s named for the Hawksmoor Church of St. George in the East.

The bus pushes on through quite narrow streets with oncoming vehicles to contend with and also crossing two major arterial routes the A13 Commercial Road and past Whitechapel the A11 Mile End Road, where the volume of traffic comes a s a quite a shock after nearly an hour of quieter backwaters, with an emphasis on the waters.   The D3 passes by the back of the Royal London Hospital, considerably less glitzy than its front face, but just as busy with patients and staff beetling everywhere.    There was a large stand of blue hire bikes we presume provided for staff and able patients as parking is just about non-existent here. While Fahkruddin Street reflects much of the local population it was difficult to find out after which famous Fahkrudin (economist? 5th Prime Minister of India?) it might have been named as none of them seemed to have local connections  but then our  journey today had started close to a Napoleon Street and to my best knowledge the little  Emperor never lived in Clapton. 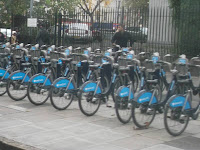 Bethnal Green, which we were now approaching was an early example of population explosion as workers arrived between 1801 and 1831 to work the looms producing silk – they are remembered inWeavers Fields now a multi use park today at half-term being used by energetic footballers. The other half-term attraction in Bethnal Green is of course the Museum of Child hood just past the major crossroads.  By now the wind had really got up and there were leaves swirling all over the roads. 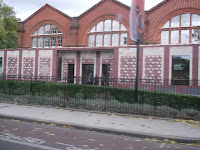 The last stretch to the London Chest Hospital was along streets lined with charming houses – perhaps the relative proximity to Victoria Park has enhanced the area  and the terraces remain largely unspoilt. The bus terminates at the London Chest Hospital lately made famous for saving the life of footballer  Fabrice Muamba in March 2012. With this East End of London so densely populated TB  and other chest conditions would have taken its toll amongst the locals so it was no surprise that  local philanthropists were keen to offer some treatment for the disease which accounted for 20%  of deaths. TB is no longer the death sentence it once was , though that is not to say that it has vanished, but the hospital continues to offer specialised treatments. 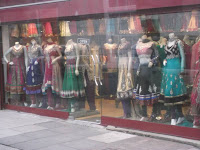 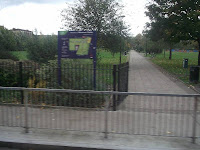 If you have continued to read thus far you have stamina which is something you might require to tackle this route as for all its path is along side streets they are nevertheless  packed with history interest and sights of all kinds – and think what we probably missed and have spared you! 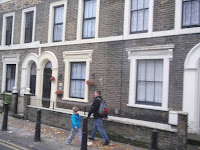 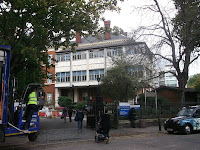