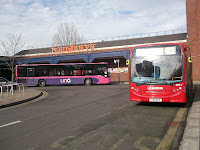 This was the spring day the weather forecast had promised us, and sure enough while not brightly sunny (and frankly the bus windows were so dirty it would have needed an equatorial sun to penetrate the mire) it was unseasonably warm. I was interested to watch a couple of hikers board the bus complete with boots/backpacks and floppy hats and they opened a bus window and then promptly moved – she to the back of the bus, he across the gangway. They did get off together so it clearly was not some deep domestic dispute. 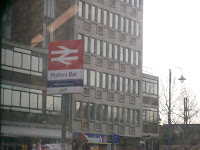 We did go into the station but did not find any very obvious memorial to the rail crash victims from 2002; their families having to wait 9 years for an outcome to various enquiries and court cases. 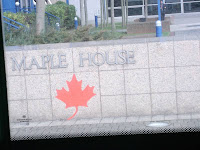 From the outside it looks more like a neglected office block with an afterthought station below…Talking of office blocks, we liked the maple leaves on the Canada Life Insurance offices – they obviously conduct most of their business online as it took me some time to find they still have some staff based here.

We purposely missed an earlier bus in an effort to locate some toilets but neither Sainsbury’s nor the station could help us so we had about 15 minutes to wait for this 3 times an hour single-decker service, which was popular all the way.

We left the station and down the High Street, which still has some individual shops although the larger supermarkets flank Potters Bar – we were soon to pass Tescos on Mutton Lane. The continuation of Mutton Lane crosses over the M25 (at one point it looked as though we might head that way ourselves) and along the very straight and ridge-like Ridgeway we sped along stopping only once. We also must have crossed over from Hertfordshire to Middlesex (Enfield) but there were no obvious boundary markers between these ancient domains. 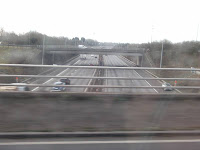 Between the speed of the bus and the dirty windows it was impossible to do photographic justice to the countryside very evident on both sides – horses are quite frequent sightings even from London buses but today we saw sheep and ducks and hens too. About halfway along is a stop called Botany Bay which seemed very out of place (last seen in Australia?) but seems to be a farm, then there was the Robin Hood pub – he also a displaced person more usually at home in Nottingham or Lincoln – followed by the Windrush which we associate with a ship which brought the early Caribbean workers to London in the Fifties... All in all we were thoroughly disorientated. At least the stop called ‘Roundhedge Way’ seemed more appropriate.

A large hotel appeared on our right and as it was called the Royal Chase hotel we knew we were getting closer to Enfield. Though the bus had been belting along the driver was encouraged to notice someone running and let her board. Not surprisingly most of the passengers were headed for Chase Farm Hospital. This hospital has had something of a chequered history having started life as a series of schools which were under utilised (not surprising the population is not that dense round here) so between the two world wars infirm women and children were sent out here from Edmonton and inner London, then next it was a geriatric unit when the NHS took over in 1948 from which time it became a more general hospital – having recently been told that it was to lose its maternity and A&E facilities we were interested to see there was a picket outside but I can imagine that this site might be considered more valuable sold off. Then came Enfield itself – today being market day most of the passengers got off here but we did take on a few more.

The traffic was flowing well through Enfield again too fast to capture much of New River but we can say it looked much cleaner than on an earlier visit.

The stretch of road between Enfield and Southbury was slow – not so much because of the major road junction with the A10 but rather some substantial road works narrowing the options. Still it gave us time to appreciate Southbury Station and the very substantial Arriva Bus garage next door. 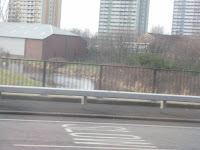 We have been here before, this stretch of the route being well served, but today no delights for us in Ponders End or Brimsdown as were to take the Valley Road across, or rather between, the two major reservoirs, named for King George and William Girling (of whom more anon)  On the bus map this looks like a delightful bit of the trip – you might imagine a causeway between/bridge over 2 lakes. The reality is very different as in fact Valley Road is indeed that – a sunken lane between 2 dammed up reservoirs – the public of course kept well away as this is one of London’s main water supplies. The attached site explains how the first dam collapsed until some engineers devised a better way.   William Girling was chairman of the Board and a Hackney Labour mayor and he opened the completed tank, which is essentially what a reservoir is. Having heard this week that we are in an official drought we really would have liked to see how much water there was but not possible from our low lying bus. 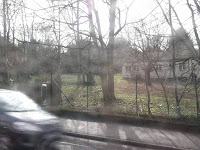 Running alongside the reservoirs and altogether more visible is the Lea Valley Navigation. By now we were nearing Chingford and back in a London Postal District – E4 as it happens – and a very pleasant approach to Chingford past a small extension of Epping Forest just glimpsed, the Green complete with some historic looking cottages (19th Century I gather so not that old), another Ridgeway and the Chingford Assembly Hall complete with a rather jolly mosaic celebrating local talent local talent  (not of the TOWIE kind).

Chingford Station road has a good range of still-functioning independent shops and the bus station is conveniently situated next to the railway station to get us home via an extremely old and dirty train which eventually works its way down to Liverpool street picking up the River Lea south east of Walthamstow.

An interesting route that starts beyond the M25 then cross countryside complete with all the requisite toy farm animals you might expect on through Enfield and past the Chingford/Lea Valley reservoirs all in 55 minutes. 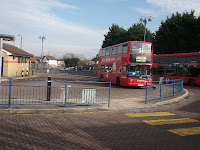