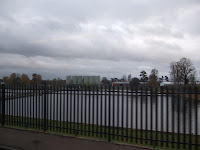 This was our last bus of a six bus day which had taken us in and out of Epsom Hospital and West Middlesex Hospital.  The weather had been gloomy, and we were a little anxious that we might not reach Kingston before nightfall (the clocks having gone back the previous weekend)  So we were pleased that by breaking into a slight jog as we got off the 117, we were able to step straight onto a 216.  Staines bus station is not the most exciting place we have ever been, though there is a Matalan…
The bus was busy from the start, as it nipped through Staines and then hurried along past various air cargo warehouses and then the Staines Reservoirs. As we came to Ashford Hospital, we were joined by a number of school students , which grew as we passed several schools. 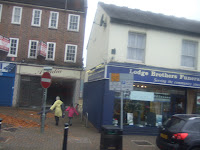 We noted a couple of funeral directors, Holmes and Daughters being one, and Lodge Brothers, established in 1780 another.
It was quite slow up to Ashford War Memorial, which gave us time to wonder again if the winged lady was an angel, or Victory, or Peace.  No answer has been forthcoming from the web. 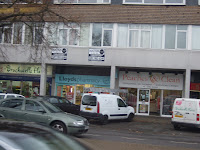 We were amused by the dry cleaners and a King’s Head Pub, showing Henry VIII, which I suppose is not surprising for this area.  Another pub, further along the A 306 was the Ash Tree, with a separate entrance for Thai Taste.  The school students were distracting us a bit with their chat.  A group of them were talking about their home circumstances, one lived with his grandparents, another was in a different foster home from her brother:  all examples of the 21st century family, so different, clearly from the picture in the minds of our politicians. 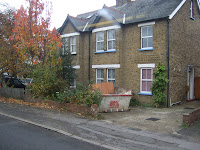 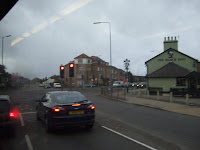 ‘Love U Forever Bridal’ attracted our attention as we went through residential areas and round Ashford Common and the Black Dog pub, with a loop round to serve the enormous Tescos. We weren’t sure whether 80% recycled meant the skip, its possible contents, or indeed, what! 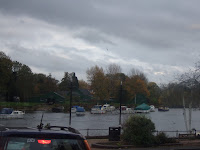 Then we came to the River, at Sunbury  and headed towards Hampton.
Passing Hampton Station and the Village Green, we saw the grounds of Hampton and Richmond Football Club, who play in the Blue Square Bet South League,  before arriving back at the River at the Hampton Ferry and the Sailing Club 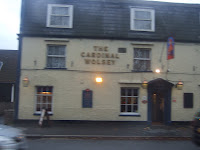 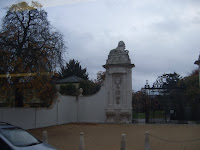 We noted a blue plaque for David Garrick as we came past the Park on our way into and out of Hampton village. Then came the Cardinal Wolsey Pub:  imagine building yourself a whole palace, and finishing up with no more than a pub in your name. 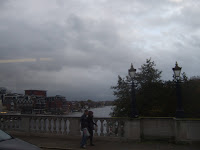 Alongside the walls of the palace, we reached the main entrance.  Then we turned back towards the River, and over Kingston Bridge to reach Cromwell Road Bus Station, not for the first time today, at 16.15, and still just about in daylight.