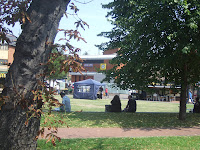 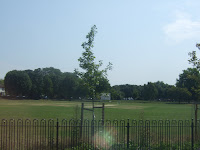 Today was a bit of a landmark, partly because it was the 200, but also because our first bus trip was made exciting by a photographer and a journalist.  You'll have to wait till the 355 to learn the details, though we will provide a link when we get published, and I'll say a bit more near the end of this account.  But for now, let's concentrate on the 200.  Linda, Mary and I boarded close to one of several greens in Mitcham, where something exciting was clearly being planned for the afternoon.  Tents were going up, and speaker systems being arranged.  We picked up the bus in one of those 'buses only' laybys, just at the end of Mitcham High Street It was 12.45 and we were bound for Raynes Park on our second single decker of the day.  The bus was very warm, as was the day, and busy with shoppers.

Next we came to the Cricket Green, the wicket looking particularly bleached, and passed a couple of derelict pubs as well as the enormous bulk of Mitcham Parish Church, and signs to Deen City Farm, which looks a fun place to visit. 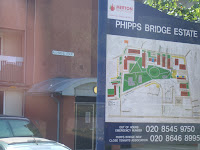 We were within reach of Croydon's tram system along here, and passed the Phipps Bridge Tram stop as well as the Phipps Bridge Estate.  Their signs are still using the older Merton logo.  They seem to have a new one, which we saw in several places, a stylised waterwheel, which we meanly thought did not really match their strapline ('moving forward') since waterwheels tend to be fixed... You can see it at the top left hand side of their website. 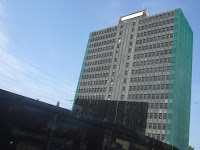 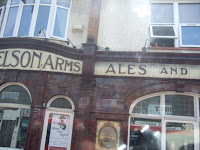 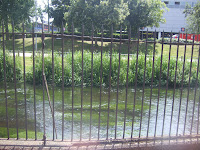 We passed a tower block which seemed about to be demolished.  It had once been called 'the Tower'; and then it was clear that we were nearing the Wandle, as the Nelson connection began to appear.  First a pub called the 'Kiss me Hardy' and then the Nelson Arms, with a fine tiled depiction of HMS Victory on its wall.  The Wandle, by the way, was looking healthy despite the lack of rain in these past weeks.

By now were were well into Colliers Wood, still picking people up as they did their shopping.  We noted the Chakalaka South African Restaurant, before turning left to head towards Wimbledon. 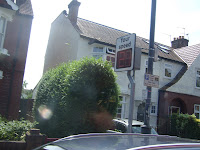 I was interested to see an actual speed indicator for passing traffic.  I live in a borough that pays lip service to 20mph as a preferred speed for residential roads, but does nothing to enforce the limit.  Our bus slowed to less than 20, though that might have been the bumps rather than the sign. 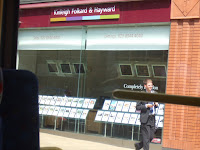 Now we came into Wimbledon, passing the 'Centre Court' shopping centre as well as the 'Hand and Raquet' pub, before heading up Wimbledon Hill and into Wimbledon Village, with its large and handsome houses. 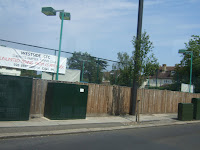 You may wonder why we have bothered with a photograph of an Estate Agent's shop. WELL, our first bus of the day was accompanied by a photographer and journalist as we may be featured in the KFH mag, Completely London.  We have seen articles in the mag about the guerrilla knitters, and night workers in London, so we overcame our prejudices (caused by a very boring experience with a previous lot, who never did anything with the stuff, and wasted a lot of our time),and went with these nice people.  We'll link to their website if we ever appear. 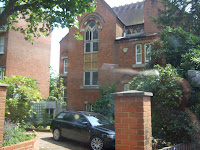 After passing the Westside Tennis Club, we headed steeply downhill to close in on Raynes Park, admiring the arts and crafts looking tiling on the outside of a substantial home.

We were amazed to see yet another new Waitrose: they seem to be springing up everywhere, and that brought us to Raynes Park Station, by 13.30, only a little over the advertised time for this route.

We had enjoyed the gentle suburbs of south west London, though air conditioning for buses might be a vote winner for the fighting mayors next year if this weather continues.