Well this is really my mother’s bus – she lives on the stretch where there are no other services and she is totally dependent on it to get anywhere significant like a shop or station, poised as she is midway between Edgware and the Northern Line and Stanmore and the Jubilee (of which more anon). There is scarcely a week goes by when she does not have a ‘142 tale of woe’ usually consisting of it not turning up for ages. She was going to join us today – the original plan had been for a lunch break at hers but as we could not manage a full complement of Ladies Who Bus the ladies Who Lunch appointment has been deferred to a later date, when Mary could join us too and some other route (there are plenty of other Edgware-based buses).

Brent Cross is of course North London’s original US style indoor mall type shopping centre and with John Lewis at one end and Fenwick’s at the other it does very nicely. It has had a couple of makeovers in its time and I rather miss the original stained glass indoor dome with water feature, which epitomised the temple to Mammon – quite good for bored children before the days of other entertainments. Today’s children could have visited Zippos Circus located somewhat strangely in the car park! 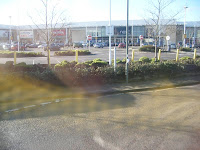 There is a certain complexity to get out of Brent Cross and the 142 does the statutory wriggle to cross the North Circular – mighty and frequently clogged at this point – and trip into the retail park that has grown up opposite the original Brent Cross plus the Holiday Inn.
Not daunted by its overexposure to flyovers and flyunders the bus then forges pretty much north in a straight line with a steady but never excessive passenger load. West Hendon tends to look rather depressed with most small shops now struggling fast and ethnic food outlets, most of them specialist. After the very modest Hendon Magistrates court the smaller shops give way to a string of car dealerships and larger retail outlets – there was formerly a rather excellent ‘Oriental City’ Development along here with a range of Eastern eateries but this was closed ages ago, although there is still no sign of the promised housing developments going up? 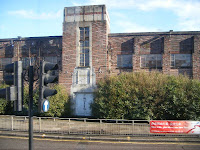 Burnt Oak at least has the virtues of a more settled community, a still thriving market and some bargain outlets – who could resist the pink leather sofa with matching table? It is also served by the Edgware Community Hospital, which they rebuilt around the older cottage hospital. 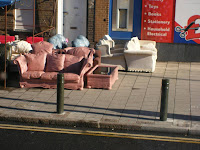 On reaching Edgware the bus takes a time-consuming detour in order to be able to pick up from the Underground and bus Stations. Totally reasonable if you are there but it takes it quite a way off its route. From Edgware to Bushey this is the only route passing as it does Stonegrove – the 1828 Almshouses remain but mostly there are Sixties, Seventies and Eighties Blocks housing an aging population leading to   Canons Corner where several roads converge at a bland roundabout – we noted this having been tipped off by Tim of an excellent little youtube film called  'Unfinished London'  which explains charmingly and cogently that these were originally destined to be further stops on the Northern Line. 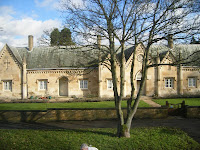 This part of NW London does now have the Jubilee Line and Stanmore is that combination between commuter suburbs with village remnants in the shape of some cottages along the High Street. It also houses my mother’s favourite and very reasonably priced fish and chip shop! 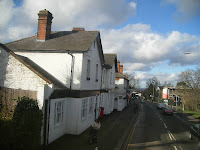 Forging on alone (to be honest from here on most homes have double garages and gated drives so they clearly don’t have to rely on the unreliable 142) the bus heads up the quite significant Stanmore Hill passing both the Stanmore Cricket club and Common which give a very pleasant rural feel. There’s even a beware the deer sign! Climbing the hill we passed close by RAF Bentley Priory – a key command station for the Observer Corps and more significantly for Fighter Command in the Battle of Britain, now awaiting  museum status.
Once on the top if the hill, today being all sunny for Valentine’s Day, we had an excellent view over the Chilterns and beyond London. Bushey, like Stanmore is another former Hertfordshire village complete with some old cottages, parish church, a village sign dating from the Queen’s Jubilee, and village shops, which seem to have survived.
The crocuses were out round near Bushey Station which because of its proximity to two significant railway viaducts necessitates another one-way system (the third on this route!), in the middle of which there was a huge building site – very busy with all the workers in hard hats making them look rather like Lego men with interchangeable heads.
(My mother remembers the sign on the viaduct at the bottom of the hill which warned 'Tighten Your Bearing Rein' ...) 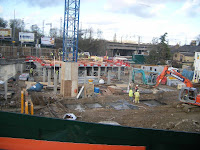 From here the approach to Watford Town Centre is busy with retail and trading estates of the sort where you can buy white goods and computers. As the traffic converges on the mighty Watford ring road there are exclusive bus, taxi and cycle lanes, which always give us a warm glow. The local Benskins Brewery went the way of most local breweries (sucked up by the big boys) but the office was preserved as the The Watford Museum.

The 142 creeps a little way down the High Street but most of the shopping areas are well pedestrianised or even enclosed in the substantial Harlequin Centre and all traffic goes round until we came to Clarendon Road which forms a rather oddly majestic approach to the very useful Watford Junction station. The road is lined with many and disparate office blocks – all built through the Seventies and Eighties as handy Headquarter buildings close both to good transport and retail hubs; the recession clearly showing with more than a few ‘To Let ‘ signs.

The 142 is one of only 2 London buses that will get you to Watford so perhaps given the distances and deviations it negotiates en route its poor time-keeping might be understandable. An interesting shopping centre to shopping centre (John Lewis to John Lewis if you will) route with both commuter residential and old villages and commons in-between and we took only 1-hour 10 minutes today.

Of course if the Northern Line had reached as far as originally planned (you need to heed the link in Paragraph 2 pay attention) there would be no 142 route as it runs today!
at 15:28