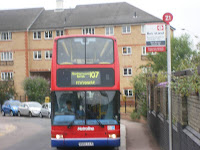 Mary & I boarded this bus in the fairly quiet forecourt of New Barnet station having just got off an 84, so it was nice to be back aboard a double decker, especially this one which has extensive views as part of its delights. The weather could have been better – we needed the rain but it was really more of a mizzly mist. 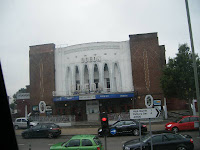 We headed back up the hill towards High Barnet station, which, being on the tube, is a more useful addition to the transport options and then past the rather handsome new fire station – just as you join the Barnet Hill (extensive views in fine weather) the 107 passes the Barnet Odeon and as you can see we have just missed it 75th birthday celebrations – still looking good and at the rate we are covering the routes we may be still be at it aged 75 ourselves? 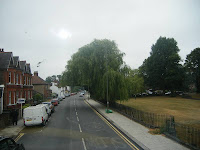 It was quite noticeable that we were on a larger bus as it quite struggled up the considerable hill but then took a decisive left turn down the side of the church. Including its spire it is very high on the London skyline and another passenger we met at the start of the trip told us his father had done war-time ‘fire-watching’ from there. This marks the start of the more villagey and older bits of Chipping Barnet, including the Museum, and the Wood Street conservation area. We noted an overhanging willow which had been trimmed much in the manner of a thatch in order to allow the bus to pass, and pass we did through to Arkley..
Rather too my surprise as my previous approaches to visit my parents who have variously been in-patients have been by car, we were suddenly alongside the Barnet and Chase Farm hospitals, which of course accounted for the rise in passenger numbers. It certainly looks as thought the previous Nissen huts where my father was admitted some 15 years previously have been finally demolished and much of the site looks new. The Nurses’ homes look abandoned leading Mary and me to wonder why these supported (in all senses) lodgings had fallen out of favour. One of the reasons we supposed was that by selling the land to property developers the Trusts could make some money and there was certainly evidence of up-market gated developments hereabouts. Rather charmingly an old pub sign remains reminding us how often these roads (and the innkeepers) must have taken money off those who passed through.

Having crossed another major motorway we headed (and this is certainly not the most direct route between Barnet and Edgware) round and through Elstree, a curious mixture of older industrial type estate and newer business parks full of glassy offices interspersed with hotels (Ibis & Travelodge). There are 203 studios left at Elstree, including some flying American flags. 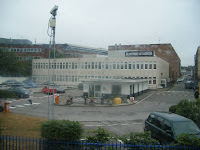 Just while you were thinking about the history and glamour of the British Film Industry (or possibly about the last series of ‘Big Brother’ whose “house” was built here) the route 107 takes a turn into a vast Tesco, which must employ many people. It was interesting to see what businesses survived post-Tesco and true to form though the High Street appeared still quite lively in the main the shops were either charity or cheap food outlets. The fact that Elstree and Borehamwood merge is underlined by the fact they both share a station – another stop we had whistled through on our northward bound journey 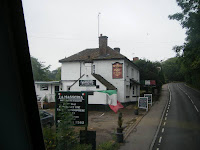 Then came what we assumed to be old Elstree village where some of the houses were wooden and old and the church flintstoned, . The bus, which has had to negotiate the complete Highway code of up and down hill starts, narrow older streets, 3 lane roundabouts now goes up and over the M1 before passing the Royal National Orthopaedic Hospital and its Aspire Centre, which does a lot of valuable rehab work. The bus then turns right at Canons Corner to do a silly fast bit on the dual carriageway which must be because it wants to approach Edgware Station from the North. Edgware Parade with its by now somewhat shabby 1923 façade. Edgware strikes one as quite urban after some of the more villagy aspects of this route, which clearly followed old lanes and tracks. Nowadays more prosaically the bus delivers patients and passengers to the local and national hospitals on its route, which today took us about an hour and delivered us at the very start/end of other branch of the Northern line. Film and hospitals in one trip!
at 12:18