This started and ended as an overcast clammy day with some fairly feeble rain in the middle (not an umbrella’s worth) and low cloud obscuring some of the photographic opportunities.
88 – two fat ladies – slight exaggeration but 2 bus ladies boarded at Camden after what seemed like a pretty long wait which somewhat set the tone for the whole journey…

It was a long time since we had done any real central London trips, having been out beyond the TfL limits recently, and while in some ways it was good to be back – lots to look at – in other ways it reminded us how unpredictable central London traffic can be. 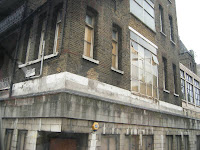 Anyway down Bayham Street, one of Dickens’s many dwellings and past the glories of Mornington Crescent – refurbished Craven A building and less furbished Taylor Walker pub (the lamps and trimmings needed a polish) and Koko club – I am sure it looks better by night.
Talking of disrepair, the former Temperance Hospital looks a real wreck along the approach to the Euston Road – perhaps it’s like the picture of Dorian Gray and the more the population drinks the more it crumbles? Not that we’re exactly tee-total.
The bus had to detour round a stranded car that seemed to have died on this rather busy thoroughfare. 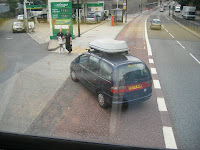 Anyway the new bit of the route into town was along Great Portland Street (this is in fact one of those routes that correctly you should do both ways: as much of the earlier part is one-way the experience surely differs). Once behind the station this is a very fine stretch of upmarket shops and restaurants including one calling itself the Flower School. Even more surprising was a shop headed up hair-raising for kids, which I thought must be an exclusive children’s salon – it however proves to be a much more worthwhile venture. 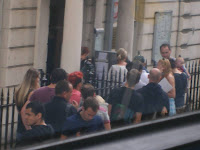 We were quite surprised to see extensive queues of young people often with buggies in line for the Polish Embassy which finds itself in this corner of the West End. Of course the 88 soon crosses Langham Place with the cleaning of the Broadcasting House nearly complete and arrives at Oxford Circus – strange all that disruption last year to create a diagonal crossing and hardly anyone uses it? The journey down Regent Street towards Piccadilly seemed painfully slow today – we had a quick ticket inspection and then spent our time wondering randomly – 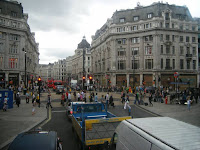 - why the road surface was quite so bumpy, after all this prime tourist Regent Street

- is oh-so-English Burberry still justified in flying the flag?

- and why had another car ground to a halt on a double yellow line just short of Eros? 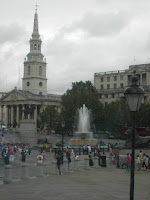 Down Haymarket was if anything even slower as by now in addition to the 10 or so routes queuing this way we had also acquired two ‘Original Sightseeing Tour’ buses. Trafalgar Square went comparatively faster and then we enjoyed reasonable speed down Whitehall giving us time to admire the range of statuary (General Haig in a rather commandeering pose), the Women at War Memorial and of course the Cenotaph. Talking of war, of course the Parliament Square peace protesters have been moved on and the grass looked as bare and yellow as it does elsewhere. 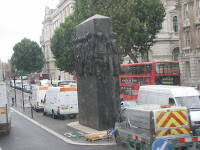 Milling crowds almost obscured the entrance to Westminster Abbey, leaving us to contemplate the Sanctuary Building nearby – once the HQ for the British Union of Fascists (I take no credit for this historical information). Soon after this and before we got too much of a nasty taste the 88 dives down Great Smith Street, which is much quieter . There was some debate as to whether the new government had dropped the Children & Families from the schools bit of its Education department so ‘we’ may be floating free again? Here is the HQ anyway, then bits of the Home Office too and eventually the 88 creeps up behind the Tate Gallery emerging in time to cross Vauxhall Bridge , which is of course where the rain set in – spoiling the transpontine photo opportunities of which I am so fond. 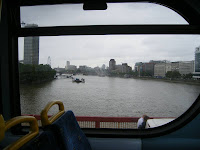 The streets off the South Lambeth Road have rather more to offer than the main drag, which has a somewhat patchwork period feel – there is just about something from each era. The  Black History Walk  starts from here and the link gives you both history and a map.
There was not to be much walking today, however, as the 88 pressed on down to Stockwell , as it happens our last journey through here (shh we’ve already ridden the 345), I think pretty thankful it could take on grateful passengers and move at normal bus speed. We passed again the church for the deaf – St Bede’s – and what seemed to be a speciality hereabouts – strange pub adornments: first of all an astronaut atop the Circle bar and a fish skeleton for the Railway Tavern near to Clapham North Underground. 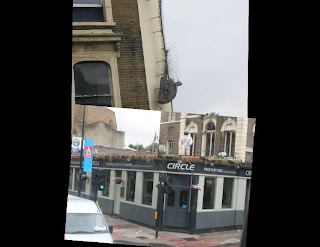 From there it is but a quick run down to Clapham Common though quick was NOT how one could describe the total running time of this trip which was close to 1 ½ hours – still, if we had wanted to be in a hurry we would have taken the Northern Line all the way, but we are the Ladies who bus so we stayed put – it’s like a slow cooked flavoursome casserole as opposed to fast food.