A North London bus through and through. This journey saw four of us embark on what was a very rainy autumn day compromising the ability to take clear photos. One of the regulars had just returned from Germany where the double-deckers have windscreen wipers UPSTAIRS for the benefit of the passengers. Anyway enough wishful thinking as 2 regulars were joined by two followers from Exeter who were on extended child care duty and had just left a false chicken pox alarm. We set off from Walthamstow where we admired the state of the art bus station complete with toilets, information office and a proper bike shed. The signposts there offer us the Vestry Museum, which we must try and visit next time we are round this way. 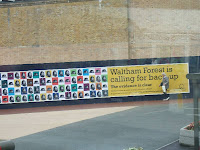 t still cared for. Walthamstow clearly hosts a Farmers’ Market, though not today, but we noted the poster appeal for more police to be allocated to the borough. We passed what called it self the ‘Tramway Offices’ so obviously public transport has been serving this part of London for many years, and also spotted the unusually named George Monoux College. Apparently George Monoux had been Lord Mayor in 1514 and founded not only the school but also some almshouses.

At this point the 34 joins the North Circular and follows it for some miles, coming off from time to time for a (not very popular) bus stop or two though clearly it is the only form of public transport along this way. What does the North Circular mean – yes IKEA – and business parks (Trinity Park at least has a nice public clock) and a random golf course called ‘Nice 2 tri’?? Waltham Forest also signpo 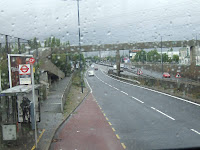 sts its Muslim cemetery, which is just off the A406 aka the North Circular. Just after that we sailed over the River Lee (but Lea Valley Ice Skating and Horse Riding centre?) towards Cook’s Ferry roundabout with an excellent view back to the Gherkin in the City. (Having recently flown in from the east on a good day these reservoirs are very visible and easy to identify as you come into London) Just to show you that we are not the only people with leftfield hobbies, I refer to you this website celebrating the detail of said North Circular (which actually makes our progress easier to follow)

By Angel Edmonton we were clearly in Spurs country with supporters flags visible from the road . Angel Road station is on the dreaded National Express East Anglian line (the 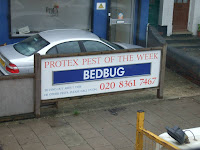 y went on strike 12/13th August 2009) so I expect the locals are pleased they have a choice of buses to get them around as well. We were back on the north Circular and close to the North Middlesex Hospital and then on through Palmers Green to Bowes Park and Arnos Grove, finally branching right, or North to get to Barnet . As we travelled variously through N22 and N11 the most exciting observation was that we caught up with the bus in front (it’s hard to slow down on a 3-lane carriageway) and past ‘Pest of the Week’ – know your enemy.

By N20 we were following the railway line (North Capital Connect ) north out of town. There seemed to be an awful lot of Barnets starting with Friern Barnet, East Barnet, and New Barnet with more to come. In Oakleigh Road, as ever when you are north of the A406 the housing improves drama 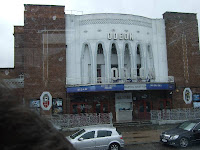 tically. Whetstone seemed slightly more down market but Barnet still had a fully functioning Odeon cinema, which was cheering to see. This is on the Great North Road which could have taken us all the way to York but which we stayed with only as far as Chipping Barnet, having passed also High Barnet (end of the Northern Line will tell you how fa 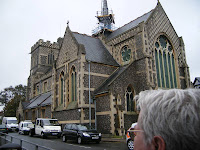 r we had gone) and finishing at Barnet Church – not immediately visible from the alighting point but just up the hill in what was clearly once the focal point of Barnet village.
Sadly any bus trip involving the North Circular in the rain is not going to be the most scintillating trip but it certainly took us to a part of North London that we had never visited before and there were some small scale delights.
at 15:04